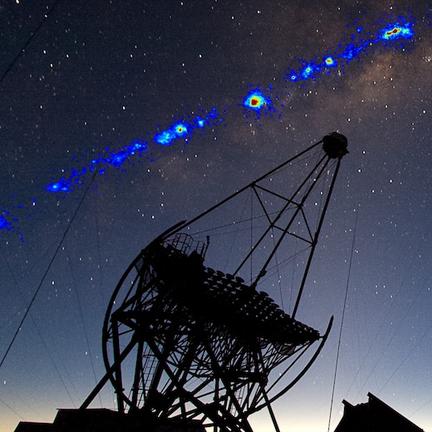 Astronomers believe they may have identified the source of the stream of cosmic rays that rain down on Earth from outer space.

Cosmic rays are extremely high-energy particles such as protons and atomic nuclei. We have known for more than 100 years that they exist but their origins have been the subject of debate.

“The most plausible 'engine' for this cosmic ray acceleration is the super-massive black hole right at the heart of our galaxy,” says Gavin Rowell, from the University of Adelaide, who took part in the study published today in Nature.

The research was based on observations by the High Energy Stereoscopic System (HESS) telescopes in Namibia, which revealed an exceptionally high energy gamma ray source. These gamma rays are produced when cosmic rays collide and interact with surrounding gases and act as “a tracer”, allowing us to locate the source.

“The most striking aspect is that the gamma ray emission properties tell us that they come from a source of cosmic rays with energies reaching 100 times higher than that of the Large Hadron Collider in CERN, Switzerland,” says Rowell.

The centre of the Milky Way is a region of great violence.

It harbours a supermassive black hole with a mass of four to five million Suns, the immense gravity of which dominates the motion of nearby stars and gas. Many massive stars are formed which develop into supernovae, the remnants of which litter the region along with pulsars.

All of this violent activity makes this region one of the brightest objects in the sky for astronomers to study in all forms of light, from radio waves right up to very high-energy gamma rays.

The balck hole was probably more active at accelerating these cosmic rays in the past, says Rowell, "and could account for most of our galaxy's highest energy cosmic rays".