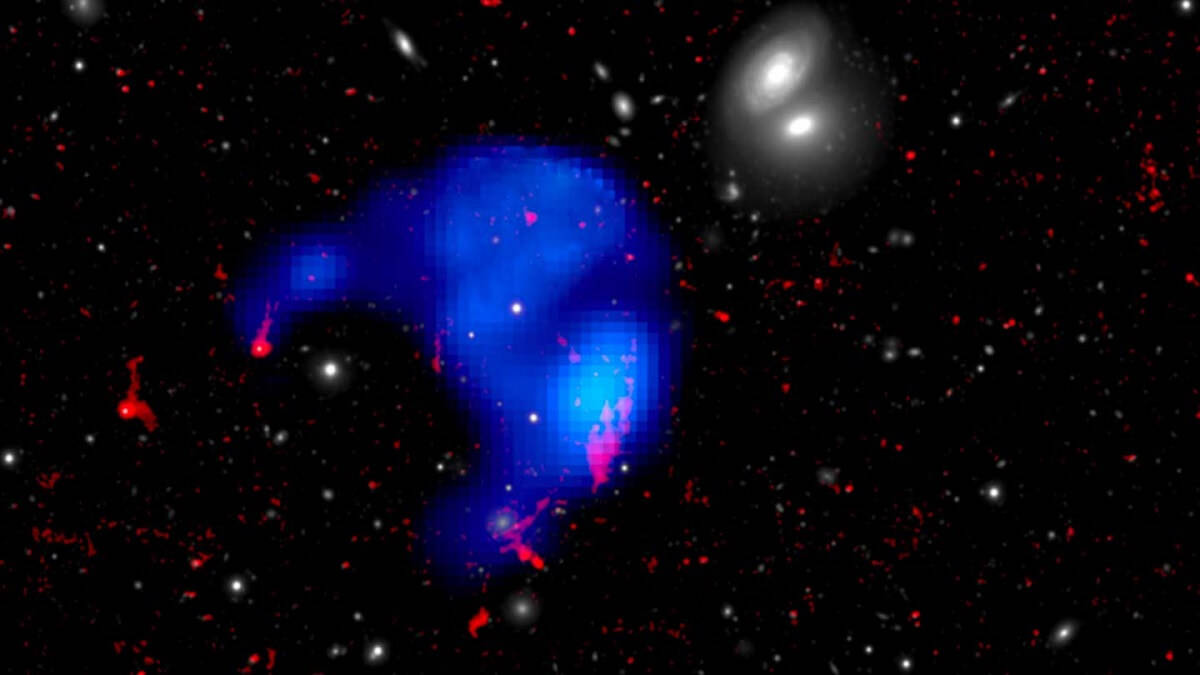 The orphan cloud is the blue umbrella-shaped part of this image, which is color-coded to show the X-ray part of the cloud in blue, the warm gas in red and the visible region in white. Credit: European Space Agency / XMM-Newton.
More on:
galaxy cluster

In a first-of-its-kind discovery, US researchers have spotted a cosmic cloud bigger than our own Milky Way, floating alone in a cluster of galaxies tenuously bound together by gravity.

This ‘orphan’ cloud has a mass 10 billion times greater than our own Sun and is made up of searing-hot gas with temperatures up to 10 million degrees Kelvin. It is believed to have been formed within one of the galaxies in the cluster and then stripped out, though researchers are puzzling over how it has survived on its own for so long instead of dissipating.

“This is an exciting and also a surprising discovery,” says Ming Sun, physicist at the University of Alabama in Huntsville, US.

Sun is the lead author of the new study, published in the Monthly Notices of the Royal Astronomical Society, which describes how the cloud was accidentally found using the European Space Agency’s (ESA) X-ray Multi-Mirror Mission (XMM-Newton), a space observatory currently in orbit around the Earth.

Follow-up observations were made on the ground by the MUSE instrument on the European Southern Observatory’s Very Large Telescope, as well as by Japan’s optical telescope, Subaru.

The optical data confirmed the cloud was located within a cluster – Abell 1367, also known as the Leo Cluster, which is 330 million light years from Earth and contains more than 70 major galaxies.

“However, the cloud is not associated with any galaxy and is in a ‘no-galaxy’s land’,” explains Sun.

The current temperature of the cloud is between 10,000 to 10 million degrees Kelvin, while the hot gas of the galaxy cluster reaches temperatures of 100 million Kelvin. This is consistent with the cloud being formed within one of the galaxies, first existing between stars as a gaseous interstellar medium.

Sun and colleagues suggest the cloud was then ripped out, as its host galaxy sped through the hot gas of the cluster at speeds of up to 2000 kilometres per second.

“It is like when your hairs and clothes are flying backward when you are running forward against a strong headwind,” says Sun. “Once removed from the host galaxy, the cloud is initially cold and is evaporating in the host intracluster medium, like ice melting in the summer.”

Puzzlingly, this cloud has likely been separated from its host galaxy for hundreds of millions of years, but it hasn’t yet dissipated. The researchers suggest this longevity may be related to its magnetic field, potentially holding the cloud together.

Now that astronomers have spotted this lonely cloud, ripped from its parent, they’ll be searching for more.

“As the first isolated cloud glowing in both the H-alpha spectral line and X-rays in a cluster of galaxies, it shows that the gas removed from galaxies can create clumps in the intracluster medium, and these clumps can be discovered with wide-field optical survey data in the future,” concludes Sun.