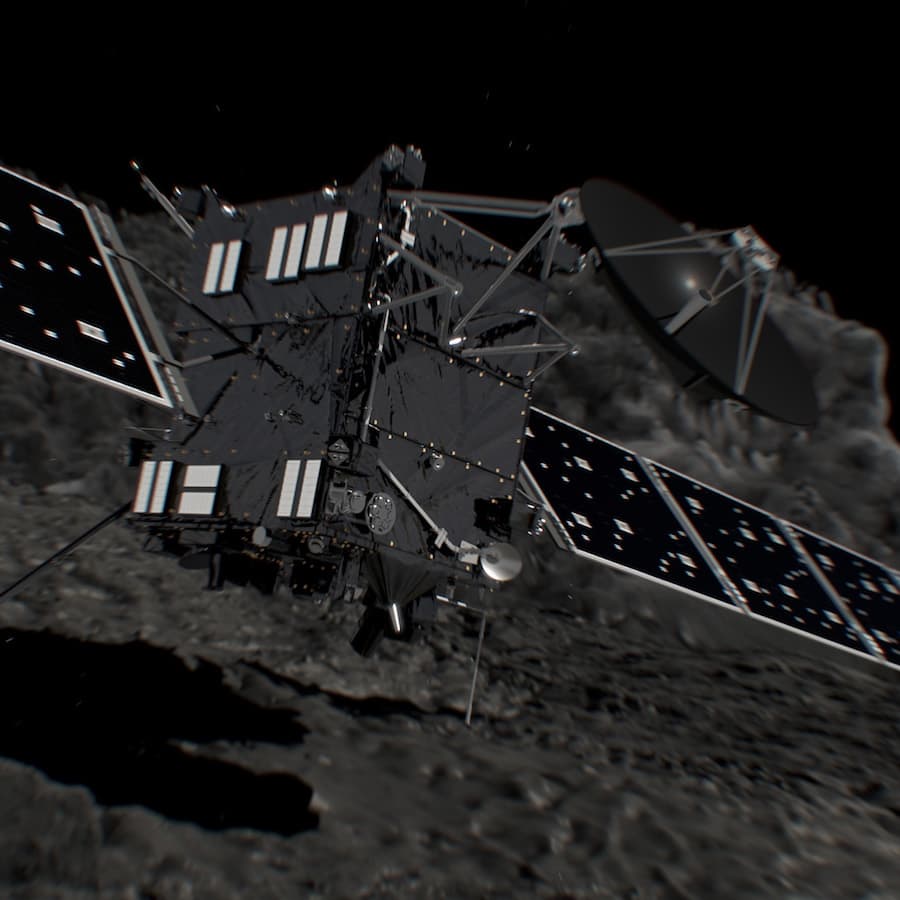 The European Space Agency control room was remarkably subdued. There was none of the nail-biting or jubilation seen during other recent space manoeuvres, such as the New Horizons flyby of Pluto or the Juno spacecraft’s descent into Jupiter’s giant gravitational field.

Instead, the atmosphere was that of a sad farewell, with a voice quietly intoning: “I declare the mission ended.”

And so the Rosetta spacecraft ended its 12-year sojourn yesterday with a deliberate, slow-motion crash into the surface of the comet it’s been orbiting since August 2014.

In the process, the spacecraft returned photos of Comet 67P/Churyumov-Gerasimenko’s surface, expected to have resolutions down to the millimetre scale once they are fully enhanced, says Holger Sierks, principal investigator for the mission’s the main camera.

The descent occurred very slowly, at a speed of about 90 centimetres per second – described by one of the team members during a telecast from mission headquarters in Darmstadt, Germany as “a snail’s pace … a slow walk.”

But because the spacecraft was never intended to be a lander, even that slow speed touchdown spelled the end of the mission because the lack of landing gear meant that even if the collision didn’t damage it too badly, there was no way the spacecraft could keep from toppling, causing its antenna to lose contact with Earth.

The decision to crash into the comet was made last year, as the comet was moving outward from the sun, carrying the orbiting spacecraft into regions with less sunlight to power its solar cells.

Even before the crash, there wasn’t enough power to keep all systems operating, Rosetta project scientist Matt Taylor explained to journalists in Darmstadt: “We had to switch some parts of the payload off, including some of the instruments.”

And even with those conservation moves, he said, power had dropped so low the spacecraft could no longer transmit data quickly. “The rate of data transmission was less than 10% of what it had been before,” he said. “So we [were] getting to the point where there [was] not much left in terms of what the spacecraft can do.”

Scientists had considered putting it into hibernation in the hope of waking it up again in a few years when the comet made its next close pass to the sun.

But, unsure whether they would be able to arouse it when the time came, they decided to instead go out with a bang, literally and figuratively.

The primary advantage of that was that it allowed them to get closer to the comet than they had ever before been willing to risk, thereby gaining data that had otherwise been unavailable.

“This was the option where we’d maximise the science,” Taylor said.

It appears to have paid off. One of the things scientists particularly wanted to see close up were deep pits whose cliff-like walls offered a glimpse below the comet’s surface, much as roadcuts allow earthly geologists to see a cross section of our planet’s subsurface.

These pits had drawn attention earlier because their walls were studded with boulders one to three metres in diameter, so numerous that they were sometimes referred to as “goosebumps”.

Also nicknamed “dinosaur eggs”, these boulders appear to be remnants of the building blocks of the comet’s nucleus, itself believed to be created by two smaller protoplanets that formed billions of years ago.

That makes them hints as to how protoplanets form – important because protoplanets are in turn believed to be the building blocks of planets.

“These images of the sidewalls give us clues to the origins of cometary nuclei,” said Sierks.

But pictures weren’t the only things the scientists hoped to obtain as the spacecraft closed in on the comet’s surface.

Six of Rosetta’s other 10 other instruments were also operating, allowing it to study a realm a kilometre or two above the comet’s surface called the “acceleration region” in which dust and vapour escaping from the comet’s interior are blown off into space to form the comet’s tail.

“We’ve looked at it from a remote sensing view, but we’ve never ‘tasted’ it, and that’s what we’ll do just before the end,” Taylor said an hour before the crash.

“We’re visual creatures, so the images are the most amazing things to look at,” adds Steve Chesley, an astrodynamicist at NASA’s Jet Propulsion Laboratory, in Pasadena, California, who commented on the mission for NASA.

“But all those other instruments – the sniffers, the spectrometers, the microwave instrument – these are all going to provide as much, maybe more information.”

So, while Rosetta has come to rest, the mission in another sense isn’t over. “We have decades of work to do on the data,” says Taylor. “So the spacecraft may end, but the science will continue.”