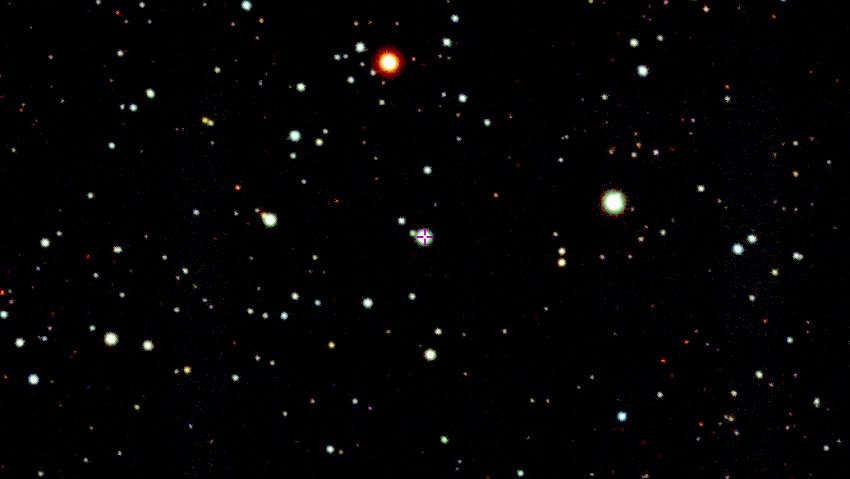 The star SMSS J200322.54-114203.3. (centre, with crosshairs) in the south-eastern corner of the constellation Aquila (the Eagle) close to the border with Capricornus and Sagittarius. Credit: Da Costa/SkyMapper
More on:
astrophysics

Australian-led researchers believe they have found evidence for a new type of stellar explosion – a magneto-rotational hypernova – that may solve the mystery of why some of the earliest stars in the universe contain more heavy metals than others.

More than 13 billion years ago, the first generations of stars were made almost entirely of hydrogen and helium, and as they exhausted their fuel and exploded, they cooked up heavier elements that seeded the next stellar generation.

But new research, led by the ARC Centre of Excellence in All Sky Astrophysics in 3 Dimensions (ASTRO 3D), has identified one such ‘chemically primitive’ star that doesn’t quite match the others. The wonderfully named SMSS J200322.54-114203.3, which orbits in the halo of the Milky Way, contains a much higher ratio of heavy metals, including zinc, uranium, europium and possibly gold, than thought possible for its age.

“The star we’re looking at has an iron-to-hydrogen ratio about 3000 times lower than the Sun, which means it is very rare – what we call an extremely metal-poor star,” says David Yong, an astrophysicist at the Australian National University (ANU) and lead author of the study.

“However, the fact that it contains much larger than expected amounts of some heavier elements means that it is even rarer – a real needle in a haystack.”

Astronomers previously knew that heavy elements could be forged by the collisions between neutron stars during this early epoch of star formation, yet these smash-ups are not enough to explain the ratios seen in SMSS J200322.54-114203.3.

“The extra amounts of these elements had to come from somewhere,” says co-author Chiaki Kobayashi from the University of Hertfordshire in the UK.

In the paper in Nature, the team calculated that these elements could be produced by a new type of explosion, triggered by the violent collapse of a rapidly spinning star. Called a magneto-rotational hypornova, this event is 10 times more energetic than a typical supernova.

“We calculate that 13 billion years ago, J200322.54-114203.3 formed out of a chemical soup that contained the remains of this type of hypernova,” says Yong. “No one’s ever found this phenomenon before.”

Astronomers have known about hypernovae for decades, but a magneto-rotational hypernova combines rapid rotation and strong magnetism.

Kobayashi explains: “We now find the observational evidence for the first time directly indicating that there was a different kind of hypernova producing all stable elements in the periodic table at once – a core-collapse explosion of a fast-spinning, strongly magnetised massive star. It is the only thing that explains the results.”

The star was first identified by ANU’s SkyMapper survey, with follow-up observations at the ANU 2.3m Telescope at Siding Spring Observatory in NSW and the European Southern Observatory’s Very Large Telescope in Chile.