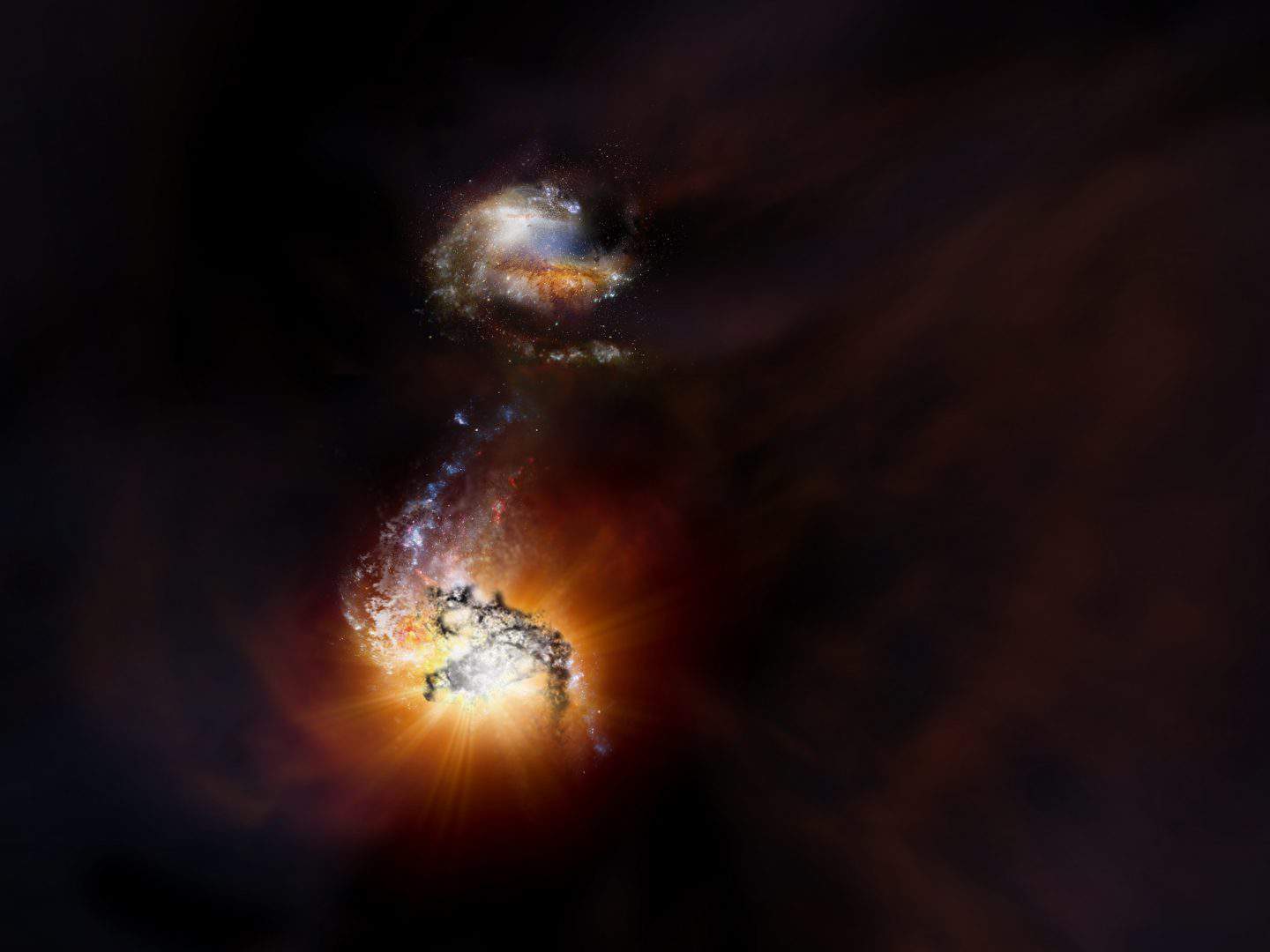 Two of the largest, brightest and rarest galaxies ever detected are on a collision course, heading for a violent merger that even usually conservative astrophysicists are describing as titanic.

In a paper published in The Astrophysical Journal, a team led by Dominik Riechers of Cornell University in New York, US, reports a unique encounter between two hyper-luminous massive galaxies about 12.7 billion light years away from Earth.

“Finding just one hyper-luminous starburst galaxy is remarkable in itself. Finding two of these rare galaxies in such close proximity is truly astounding,” says Riechers.

“Considering their extreme distance from Earth and the frenetic star-forming activity inside each, it’s possible we may be witnessing the most intense galaxy merger known to date.”

The galaxies, known collectively as ADFS-27, were detected by the Atacama Large Millimetre/submillimetre Array (ALMA) in Chile.

Because of the vast distances involved, the interacting galaxies – which have already sideswiped each other – are being seen only about one billion years after the Big Bang. Hyper-luminous starburst galaxies are rare at any time, but exceedingly so in the early epoch of the universe.

Seeing two – and two so close together – is unprecedented and represents one of the most extreme examples of violent star formation ever witnessed.

ADFS-27 was first observed by the Herschel Space Observatory, operated by the European Space Agency, but the resolution was sufficient only to reveal a dull red dot. ALMA’s much greater imaging acuity revealed the dot to be two galaxies – massive ones – circling each other and gradually drawing closer together.

Riechers and his colleagues estimate that they are about 30,000 light years apart and moving relative to each other at several hundred kilometres.

The titanic young universes are full of dust, which is coalescing into stars. Indeed, the scientists say star formation is going on “at breakneck speed”.

The newly formed stars would appear massive and bright blue (if an observer was positioned several billion light-years closer). The heat they emit warms up the surrounding dust clouds, turning them red. Hyper-luminous galaxies are hard to detect, however, because the warm dust obscures the stars themselves, and the infrared light coming off the dust itself shifts as it travels, becoming millimetre and submillimetre wavelengths.

It is precisely these wavelengths that ALMA is designed to detect.

“Due to their great distance and dustiness, these galaxies remain completely undetected at visible wavelengths,” explains Riechers.

“Eventually, we hope to combine the exquisite ALMA data with future infrared observations with NASA’s James Webb Space Telescope. These two telescopes will form an astronomer’s ‘dream team’ to better understand the nature of this and other such exceptionally rare, extreme systems.”

Eventually, too, the pair of enormous galaxies will fall helplessly into each other’s gravity and combine to form the core of an elliptical, disc-like galaxy cluster, thereby becoming one of the largest structures in the universe.

Despite the high speeds involved in the ongoing collision, however, the full, massive, titanic, gargantuan merger will not take place for another several hundred million years.

Originally published by Cosmos as Clash of the titans