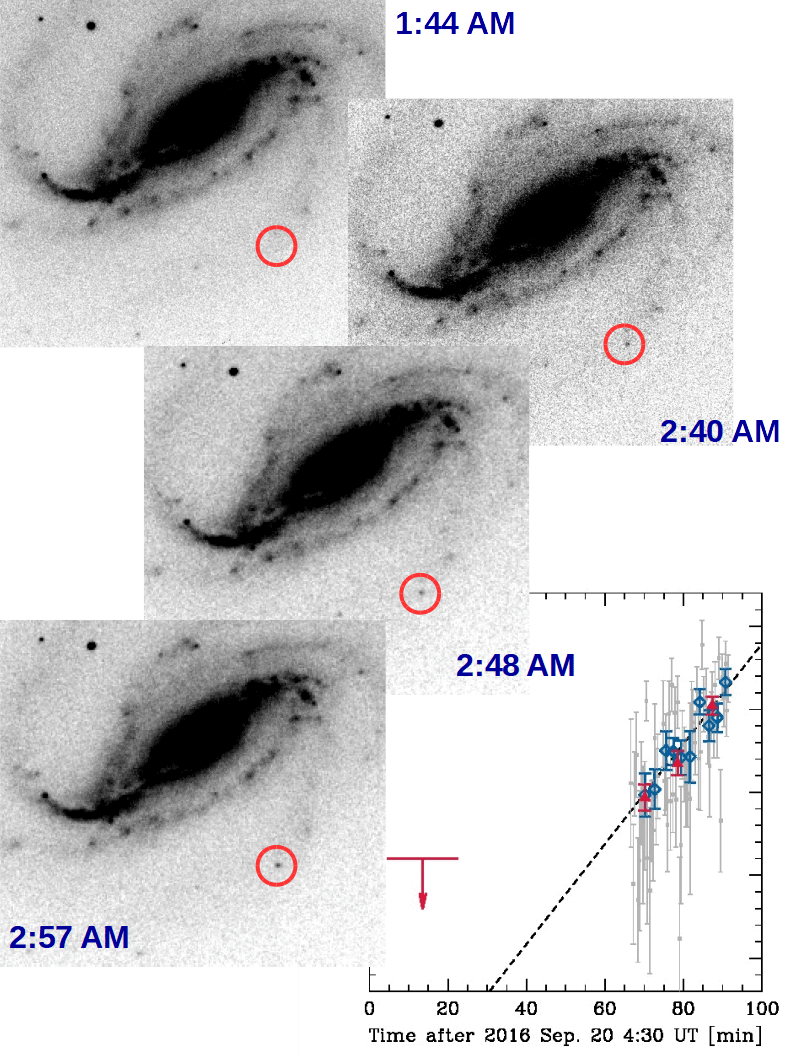 Argentinian amateur astronomer Víctor Buso expected a quiet night out testing a new camera on his telescope, but instead serendipitously witnessed the explosive end of an ancient, massive star: a supernova.

This one-in-ten-million discovery provides the opportunity for astronomers to learn more about the final evolution and structure of exploding stars, which are responsible for producing new elements that become the building blocks for stars and galaxies.

Realising what he was observing, Buso immediately contacted the Astronomical Observatory of Córdoba in the middle of the night, but to no one answered. Buso turned instead to amateur observer networks and roused Sebastián Otero, the American Association of Variable Star Observers (AAVSO) contact in Buenos Aires. Together they put out an announcement.

Just 12 hours later, the Australia Telescope Large Area Survey (ATLAS) team set its sights on the supernova, subsequently dubbed SN 2016gkg. As night spread across the rest of the globe, astronomers went into a frenzy of observations, studying the object in X-ray, ultraviolet and optical wavelengths. This made it one of the best observed supernova events in recent times.

In a study published in the journal Nature, an international team of astronomers reports on its extensive monitoring of SN 2016gkg as it evolved. The team was led by Argentinian Melina Bersten from the Instituto de Astrofísica de La Plata, whose supernova research group worked directly with Buso’s sequence of images.

When a star goes supernova, it releases a violent flash of light as a shockwave blasts through the stellar surface from the interior. Studying this surge of emission — known as the “shock breakout” phase — can contribute to our understanding of how stars evolve by giving astronomers information about the size and mass of the star, its final structure and its surrounding material.

“All of the interesting physics in supernovae really comes from the first few hours,” says astrophysicist Brad Tucker from the Mount Stromlo Observatory at ANU, who was not part of the research team.

But most supernovae are detected long after this initial dazzling emission.

“Catching the moment when the supernova breaks through the surface of the star has been elusive,” says Jeffrey Cooke, an astrophysicist at the Swinburne University of Technology who was also not involved in the study.

“This is because they’re rare, you can’t predict when they will happen, they’re relatively faint, and the duration of the shock breakout is very short.”

In recent years. supernovae have been discovered sooner and sooner after the explosion, but Buso’s achievement topped them all. Bersten notes that Buso “is likely the first reported person to catch a supernova on camera at the very moment of the shock emergence”.

Buso spotted SN 2016gkg in a spiral galaxy called NGC 613, on the night of 20 September, 2016. The supernova first appeared as a dim new point of light just below the galaxy’s stunning pinwheel disk, but then rapidly brightened until it was a dazzling pinprick, confirming the predictions of stellar explosion models.

By combining observations with theory and sophisticated computer modelling, Bersten’s team was able to distinguish between different phases in the evolution of the supernova, each of which is regulated by different physical processes.

“This opens the possibility of probing the structures of massive stars and thus learning about their evolution and mass-loss processes,” Bersten says. “This is fundamental to advance our knowledge of stellar physics.”

SN 2016gkg is classified as a type IIb supernova, meaning it was caused by the core collapse of a massive star and is rich in hydrogen and helium. {%recommended 6179%}

“These are rare and not very well understood, so this is a great step,” notes Tucker. “Even more impressive is that there are Hubble images, which show the individual star before it exploded.” This gives a complete picture of the event.

Bersten’s team will continue to observe and analyse SN 2016gkg over the coming months.

“We will re-observe the supernova site with the Hubble Space Telescope in order to see what is left at the supernova location, and to confirm the properties of the star that exploded,” Bersten says. “All of this will provide independent clues of the origin of this remarkable object.”

Perhaps the most amazing thing about this discovery is that it was made by an amateur astronomer, demonstrating their significant contributions to the field.

As Tucker comments: “With all of the major surveys and facilities, some of the most important supernova have been found by amateurs.”

Originally published by Cosmos as Caught on camera: the birth of a supernova