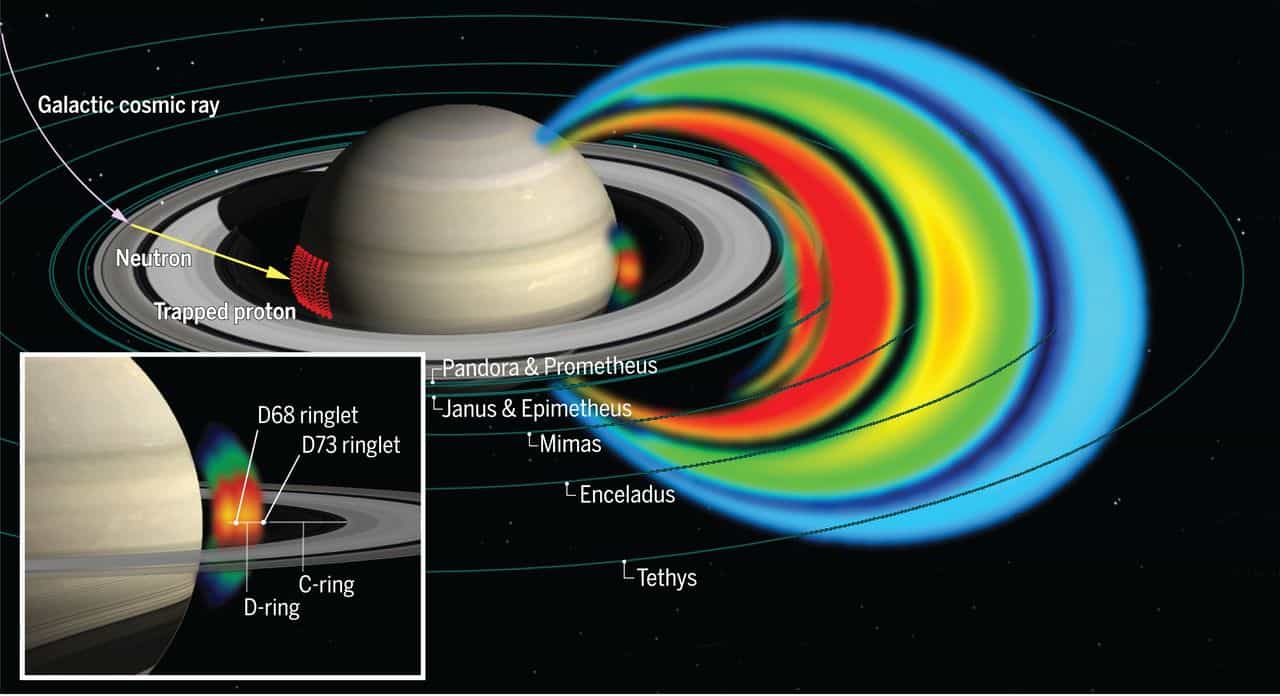 Saturn’s magnetic field is already acknowledged as odd, but researchers have now discovered it to be even stranger than expected, finding a completely isolated inner belt of radiation trapped in the magnetosphere just above the planet’s atmosphere.

As NASA’s Cassini spacecraft entered the last phase of its mission exploring Saturn, in September, 2017, scientists on the ground pushed its final 22 orbits closer and closer to the planet in a series of risky moves skimming the top of the atmosphere.

That risk paid off handsomely, with the spacecraft detecting an inner belt of radiation trapped close to the surface of the planet, the details of which have been published in a series of papers in the journals Science and Geophysical Research Letters.

Saturn has well known belts of radiation, consisting of high energy protons and electrons circling the planet outside its rings. The radiation extends more than 285,000 kilometres into space and is strongly influenced by Saturn’s numerous moons, which segment it into five sectors.

In 2004 while using Cassini’s Low Energy Magnetospheric Measurement System (LEMMS) and Magnetosphere Imaging Instrument (MIMI) magnetosphere measuring devices on Cassini to study the outer magnetic fields, researchers including Elias Roussos from the Max Planck Institute for Solar Systems in Germany caught hints of an unexpected inner ring of radiation between the planet and its innermost belt, known as the D-ring.{%recommended 5048%}

The measurements indicated that a population of charged particles may be present, but its exact composition and properties remained obscure. It was not until near the end of Cassini’s mission that they could follow up the findings.

“Only 13 years later, shortly before the end of the mission, we were given the opportunity to follow up on our very first measurements at Saturn and see if an additional radiation belt sector co-exists with the D-ring and the upper atmosphere of the planet,” explains Roussos.

The high-energy particles forming the belt are captured from incident galactic cosmic radiation. When such radiation interacts with material in Saturn’s atmosphere or in its dense rings, it triggers a chain of reactions that generate the protons subsequently trapped by the planet’s magnetic field.

However, the field is at least 10 times stronger close to the planet than it is in the main radiation belts further out, meaning protons can remain lodged in the same place for years. Trapped in the field, the particles would continuously interact with the planet and inner D-ring, gradually losing their energy.

The inner edge of the radiation reaches to the edge of Saturn’s atmosphere, while the outer reach of the belt was found to be limited by a component of the D-ring dubbed D73. Another ringlet, D68, splits the belt in two.

The difference in density between the inner and outer regions effectively forms a proton prison.

“Outward of the D ring, Saturn’s A, B and C rings, are significantly denser and dustier, forming an effective 62,000-kilometre barrier for the trapping of charged particles,” says Roussos.

That separation means that the inner radiation belt is completely isolated from the rest of the magnetosphere.

This makes the inner region unique in our solar system. The planet has essentially provided scientists with a radiation belt that can be studied in highly controlled conditions, as its protons get created by a very stable process guided and controlled by the planet’s strong magnetic field.

Unlike every other planet with a magnetic field in our solar system, Saturn’s turns out to be tilted less than 0.01 degrees from the planet’s spin axis.

This was a surprise, because scientists believed that planets could only generate magnetic fields when there was a difference between rotation and magnetic axes.

Such a tilt would sustain currents in a liquid metal layer deep inside a planet. Without one, physicists suggested, the currents would eventually subside causing the magnetic field dissipate.

At only 0.01 degrees, Saturn’s tilt is well below the 0.06 degree lower limit that scientists had thought required to maintain the internal current.