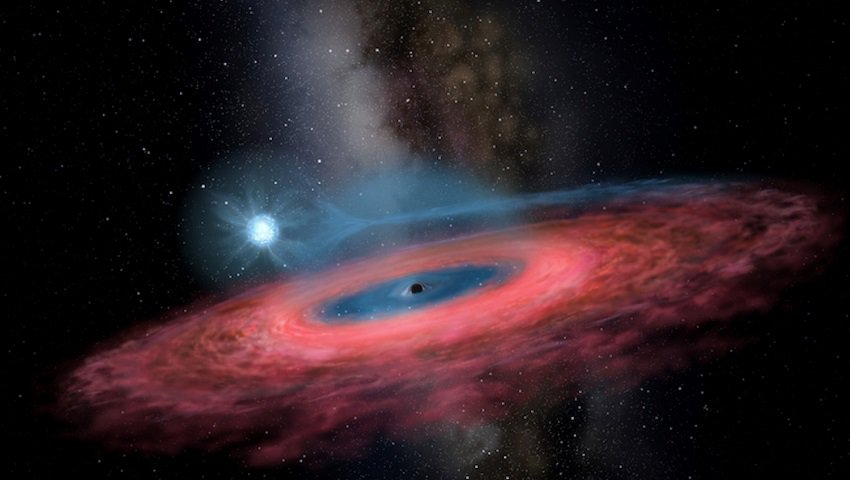 through a truncated accretion disk.

Astronomers have discovered that some black holes may be born more than twice as big as previously thought.

Using the LAMOST optical telescope in north-east China, an international team led by Professor Jifeng Liu from the National Astronomical Observatory of China has identified a stellar black hole with a mass 70 times that of the Sun.

The monster is located 15 thousand light-years from Earth and has been named LB-1, they report in the journal Nature. And it came as a big surprise.

“[Stellar] black holes of such mass should not even exist in our galaxy, according to most of the current models of stellar evolution,” says Liu.

“We thought that very massive stars with the chemical composition typical of our galaxy must shed most of their gas in powerful stellar winds, as they approach the end of their life.

“Therefore, they should not leave behind such a massive remnant. LB-1 is twice as massive as what we thought possible. Now theorists will have to take up the challenge of explaining its formation.”{%recommended 6994%}

A stellar black hole is formed from the collapse of a single star. Supermassive black holes, which form at the centre of galaxies, including our own Milky Way, can be much larger.

Until just a few years ago, stellar black holes could only be discovered when they gobbled up gas from a companion star. This process creates powerful x-ray emissions, detectable from Earth, that reveal the presence of the collapsed object.

To counter this limitation, Liu and collaborators surveyed the sky looking for stars that orbit an invisible object, pulled by its gravity. This technique was first proposed by the visionary English scientist John Michell in 1783, but it has only become feasible with recent technological improvements in telescopes and detectors.

Still, such a search is like looking for the proverbial needle in a haystack: only one star in a thousand may be circling a black hole.

After the initial discovery, the world’s largest optical telescopes – Spain’s 10.4-metre Gran Telescopio Canarias and the 10-metre Keck I telescope in the US – were used to determine the system’s physical parameters.

And the result was that a star eight times heavier than the Sun was seen orbiting a 70-solar-mass black hole, every 79 days.

Co-author Alexander Heger, from Australia’s Monash University, says the previous view was that stars in our galaxy cannot easily make a black hole bigger than 45 times the mass of the Sun.

“But the black hole we have observed is more than 50% larger than this limit,” he says. “We will now be able to make many detailed follow-up observations using a wide range of ground-based and space-borne telescopes.”

Originally published by Cosmos as Can stellar black holes get any bigger? Seems that’s a yes