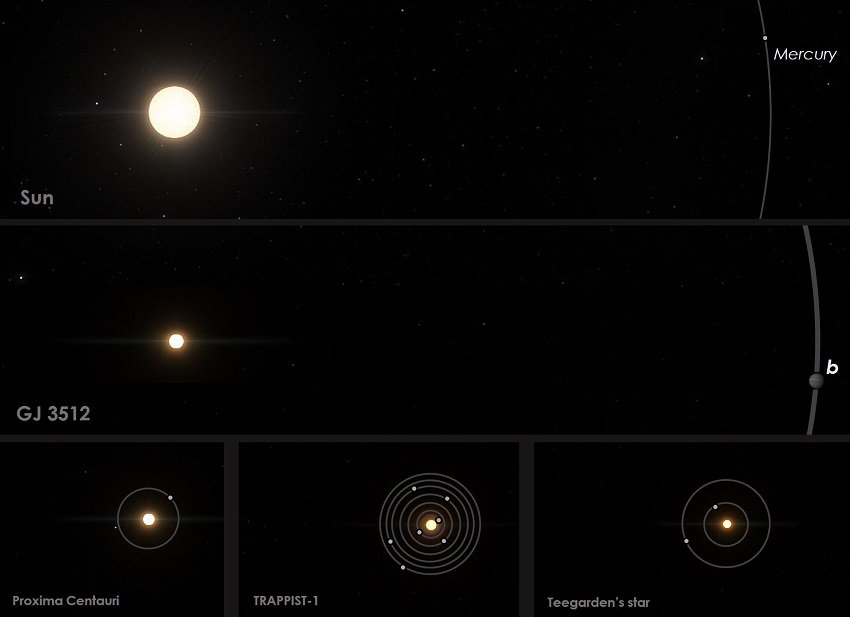 Comparison of GJ 3512 to the Solar System and other nearby red-dwarf planetary systems. Planets around a solar-mass stars can grow until they start accreting gas and become giant planets such as Jupiter, in a few millions of years. But we thought that small stars such as Proxima, TRAPPIST-1, Teegardern’s star and GJ 3512, could not form Jupiter mass planets. Credit: Guillem Anglada-Escude – IEEC, Spaceengine.org
More on:
stars

Astronomers studying nearby stars have found a giant Jupiter-like planet circling a tiny red dwarf star 31 light years away, an unusual pairing that stretches the boundaries of our understanding of planet formation.

The exoplanet, called GJ 3512 b, is about half as massive as Jupiter (and 150 times more massive than Earth), while its host star, GJ 3512, is little more than one-tenth the mass of the Sun.

Not only that, Spanish astronomer Juan Carlos Morales and colleagues write in the journal Science, the shape of GJ 3512 b’s orbit indicates that its solar system might contain another giant planet of comparable size, tentatively designated as GJ 3512 c.

It’s an interesting find, says Greg Laughlin, an astronomer at Yale University, New Haven, Connecticut (and author of a commentary on Morales’s paper), because in general, stars usually get 99.99 percent of their solar systems’ mass, with a mere 0.01 percent of the leftovers going to their planets. “Here, it’s more like one part in 300,” he adds.

Furthermore, Laughlin says, giant planets circling small stars are rare. “This is not the first exception,” he says, “but [this] is the type of planet you would normally expect to find around solar-type stars.”

Such a pairing, Morales and colleagues say, is difficult to explain by standard planetary formation models, under which gas giant planets first accrete a solid core, then sweep up gas from their star’s protoplanetary disc – a process that doesn’t seem to work well in protoplanetary discs circling stars as tiny as GJ 3512.

Instead, Morales’s team says, some other process must have been at work, possibly involving “disc instabilities” in which planets like GJ 3512 b might form in isolated parts of a cold, relatively massive disc, where they can grow to large sizes free of interference from interaction with other parts of the disc.

“This was not how Jupiter was formed,” Laughlin writes in his commentary, “but [it] provides an attractive mechanism for the formation of GJ 3512 b and its possible companion.”

But that, he says, isn’t the most important aspect of the new discovery.

GJ 3512 b was discovered by using spectroscopic analysis to study tiny changes in the motion of its star – changes that show up as GJ 3512 b slowly completes its 204-day orbit and tugs its star first one direction, then the other.

These changes in motion cause the star’s spectrum to shift slightly in response, just as a train whistle changes in pitch as the train approaches, then passes by, in a phenomenon known as the Doppler effect.

It’s a time-tested method of searching for exoplanets, but it fell out of vogue when NASA’s Kepler space telescope started discovering huge numbers of exoplanets by a different method, which involved watching for changes in the light of distant suns as their planets’ shadows crossed between us and them.

This study, Laughlin says, shows how, with the development of a new generation of instruments, the Doppler method is poised to experience a resurgence, with the Morales’s new find “at the vanguard of a coming wave”.

Meanwhile, don’t expect the newly discovered planet to feature strongly in the search for extraterrestrial life. Not only is it, itself, almost certainly an uninhabitable gas giant, but it’s also unlikely to have habitable moons, because it’s simply too far away from its sun.

“This planet doesn’t get much energy from its star,” Laughlin says, “not because it’s far away,  [most of its orbit lies closer to its sun than the planet Mercury does to our Sun], but because the star’s output is so low that temperatures on this planet will be very low.”

Artistic representation of the orbits of the planets around GJ 3512. The giant planet discussed in the paper is represented in the inner orbit, while the outer one corresponds to the long period signal also found in the data for which confirmation is still needed. Credit: Guillem Anglada – Escude – IEEC/Science Wave, Spaceengine.org