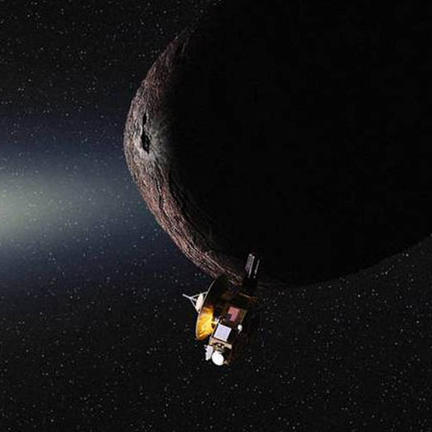 If you thought Pluto was enigmatic and remote, that’s nothing compared to where New Horizons is heading next. The space probe is now plunging deeper into the Kuiper Belt at the outer limits of the Solar System. In late August, NASA selected Kuiper Belt object 2014 MU69 as the target for New Horizons’ next close flyby.

2014 MU69 is one of the tens of thousands of Kuiper Belt objects (KBOs) orbiting beyond Neptune. Pluto, too, is a KBO, but it’s a giant by KBO standards. Little 2014 MU69 – less than 50 kilometres in diameter – should reveal what a more typical KBO is like.

NASA always intended New Horizons to visit one or more KBOs after surveying Pluto. But these objects are all so small and distant that a survey involving some of our largest ground-based telescopes failed to detect a suitable target in New Horizons’ path.

2014 MU69 was identified after astronomers were granted time on the Hubble Space Telescope to seek KBOs close enough to New Horizons’ trajectory to be reached with the spacecraft’s remaining fuel.

Virtually nothing is known about 2014 MU69 except it lies about 1.5 billion kilometres beyond Pluto and is roughly 45 kilometres in diameter (less than 1% the size of Pluto, but 10 times larger than a typical comet).

Pluto presented surprises beyond a science fiction writer’s imagination: mountains, glaciers, signs of recent geological activity, and a complex atmosphere. In addition, 95% of the Pluto data collected by New Horizons has yet to reach the Earth. Nobody knows what else might be found.

But “Pluto is not characteristic of the Kuiper Belt,” says Alessandro Morbidelli, a Kuiper Belt expert from the Côte d’Azur Observatory in Nice, France.

Astronomers agree more KBOs should be investigated. They are so far from the Sun they have spent 4.6 billion years in the deep freeze. They should give us a good picture of what conditions were like when the Solar System was first forming. “One cannot understand the Solar System without understanding the Kuiper Belt,” Morbidelli says.

On Pluto, the recent geological activity New Horizons detected seems to have erased the ancient impact craters that might have helped astronomers piece together the Solar System’s early history, says NASA planetary scientist Bonnie Buratti. If, as seems likely, 2014 MU69 is too small to be geologically active, its surface may be a better witness to what she calls the “collisional environment” of the outer Solar System.

Studying the Kuiper Belt is like studying the asteroid belt between Mars and Jupiter, Buratti adds. “Some asteroids are stony, some are metallic. Some have rare minerals. You can’t get a good feel for what asteroids are like by just looking at one or two,” she says.

New Horizons needs to adjust its course slightly to get to its new destination. The estimated encounter date is 1 January, 2019.

Originally published by Cosmos as Beyond Pluto – New Horizons’ next target