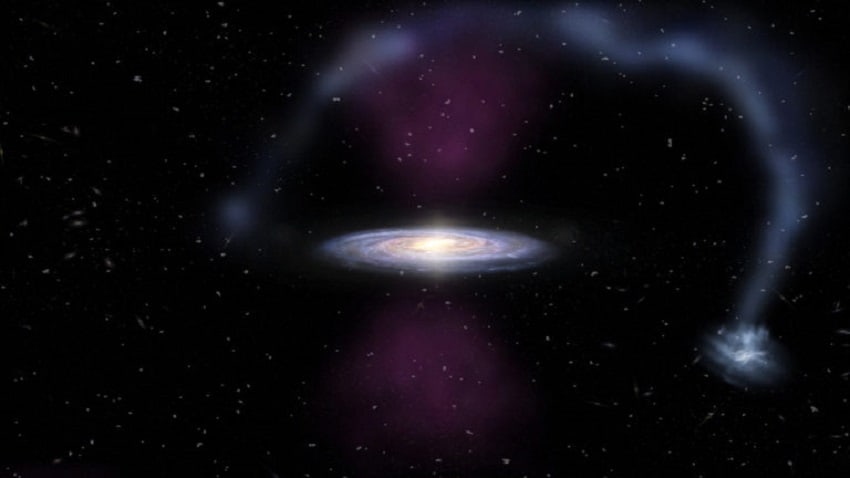 An artist’s impression of the massive bursts of ionising radiation exploding from the centre of the Milky Way and impacting the Magellanic Stream. Credit: James Josephides/ASTRO 3D

A titanic, expanding beam of energy sprang from close to the supermassive black hole in the centre of the Milky Way just 3.5 million years ago, sending a cone-shaped burst of radiation through both poles of the Galaxy and out into deep space.

That’s the finding arising from research conducted by a team of scientists led by Professor Joss Bland-Hawthorn from Australia’s ARC Centre of Excellence for All Sky Astrophysics in 3 Dimensions (ASTRO 3D) and soon to be published in The Astrophysical Journal.

The phenomenon, known as a Seyfert flare, created two enormous ‘ionisation cones’ that sliced through the Milky Way – beginning with a relatively small diameter close to the black hole, and expanding vastly as they exited the Galaxy. So powerful was the flare that it impacted on the Magellanic Stream – a long trail of gas extending from nearby dwarf galaxies called the Large and Small Magellanic Clouds. The Magellanic Stream lies at an average 200,000 light years from the Milky Way.

The explosion was too huge, says the Australian-US research team, to have been triggered by anything other than nuclear activity associated with the black hole, known as Sagittarius A, or Sgr A*, which is about 4.2 million times more massive than the Sun.

“The flare must have been a bit like a lighthouse beam,” says Professor Bland-Hawthorn, who is also at the University of Sydney.

“Imagine darkness, and then someone switches on a lighthouse beacon for a brief period of time.”

In Galactic terms, that is astonishingly recent. On Earth at that point, the asteroid that triggered the extinction of the dinosaurs was already 63 million years in the past, and humanity’s ancient ancestors, the Australopithecines, were afoot in Africa.

“This is a dramatic event that happened a few million years ago in the Milky Way’s history,” says Professor Lisa Kewley, Director of ASTRO 3D.

“A massive blast of energy and radiation came right out of the galactic centre and into the surrounding material. This shows that the centre of the Milky Way is a much more dynamic place than we had previously thought. It is lucky we’re not residing there!”

The blast, the researchers estimate, lasted for perhaps 300,000 years – an extremely short period in galactic terms.

In conducting the research, Professor Bland-Hawthorn was joined by colleagues from the Australia National University and University of Sydney, and, in the US, the University of North Carolina, University of Colorado and the Space Telescope Science Institute in Baltimore.

The paper follows on from research also led by Professor Bland-Hawthorn and published in 2013. The earlier work looked at evidence of a massive explosive event beginning in the centre of the Milky Way, ruled out a nuclear starburst as the cause and tentatively tied it to activity in SgrA*.

“These results dramatically change our understanding of the Milky Way,” says co-author Magda Guglielmo from the University of Sydney.

“We always thought about our Galaxy as an inactive galaxy, with a not so bright centre. These new results instead open the possibility of a complete reinterpretation of its evolution and nature.

“The flare event that occurred three million years ago was so powerful that it had consequences on the surrounding of our Galaxy. We are the witness to the awakening of the sleeping beauty.”

The latest work firms up SgrA* as prime suspect, but, the researchers concede, there is still a lot more work to be done. How black holes evolve, influence and interact with galaxies, they conclude, “is an outstanding problem in astrophysics”.

The paper is available on the preprint site arxiv.org.

An artist’s impression of the massive bursts of ionising radiation exploding from the centre of the Milky Way and impacting the Magellanic Stream.

Related reading: Stars on the outskirts of the Milky Way