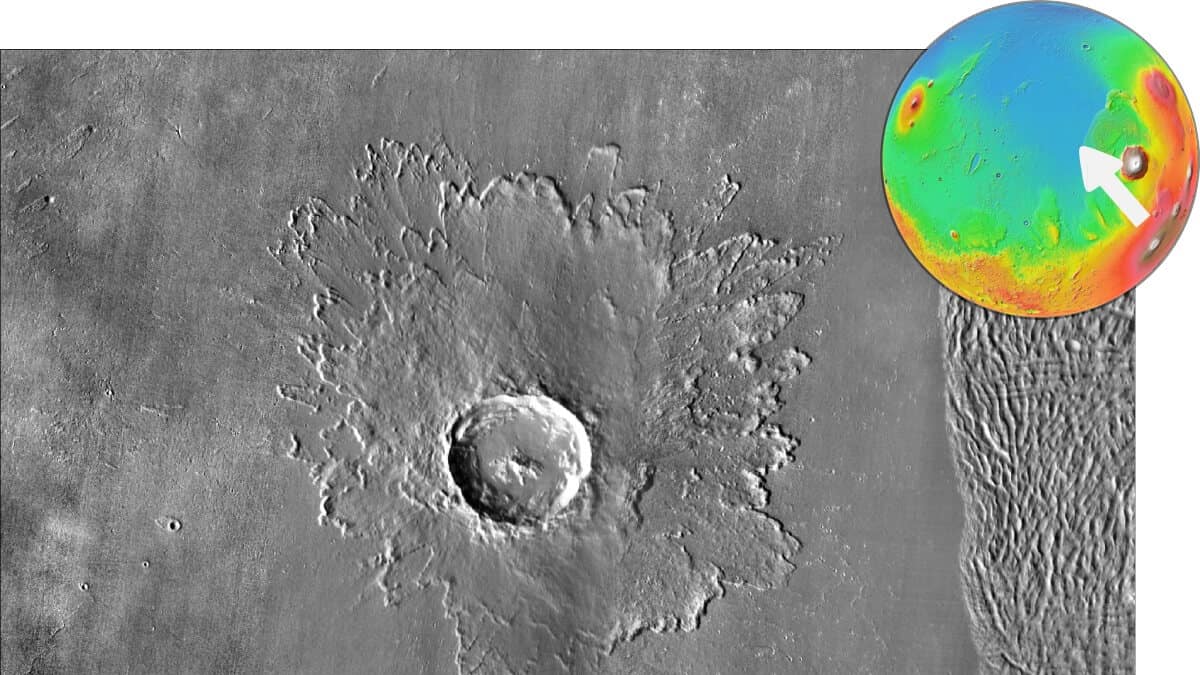 The Tooting crater on Mars, thought to be a likely origin of shergottite meteorites. Credit: Curtin University
More on:
geology

Where do Martian meteorites come from? This seems like a tautological question, but in order to learn more about the geology of Mars, it’s important to find out where on the red planet these rocks originated before they ended up on Earth.

“The only rocks we get from Mars are Martian meteorites,” says Dr Anthony Lagain, a researcher at Curtin University’s Space Science and Technology Centre.

There aren’t many of these Martian rocks on Earth, making it difficult to draw conclusions about the geology of the planet in the same way we can study Earth.

“It’s very important to understand: what is the context of these rocks?” says Lagain. “Where are they coming from?”

Lagain and colleagues have used a supercomputer and an algorithm they developed to learn more about these meteorites. In doing so, the researchers have been able to say that a group of meteorites likely began in a couple of craters in Mars’ Tharsis region, before their ejection 1.1 million years ago.

A paper describing their research is published in Nature Communications.

The researchers figured out the origin of these rocks by looking at craters on the Martian surface.

In order to make it to Earth, these impacts need to have come at an angle and force that launches rocks off the planet. Such impacts should leave behind craters of certain shapes and sizes. Secondary craters, which form from matter ejected by a larger crater, can yield a lot of information here.

Unfortunately, secondary craters are very small, and there are millions of them on Mars, so it would take a lifetime to manually find the meteorite-generating craters.

This is why the researchers used an AI to examine the Martian surface.

“The idea is to try to detect all of these small secondary craters in order to identify … larger craters that are responsible for the ejection of Martian meteorites,” says Lagain.

The researchers did this by feeding a convolutional neural network (a type of machine learning algorithm) images of craters, where the craters had been marked out.

“Then you apply it on very high-resolution imagery, and what it will give you is a list of the craters,” says Lagain.

The algorithm was able to put together a database of 90 million impact craters on the Martian surface.

This could then be used to determine the origin of shergottites, one of the Martian meteorite groups that have been found on the Earth’s surface. The researchers traced these meteorites to the Tooting and 09-000015 craters, both in the Tharsis region of the red planet.

This has interesting implications for the geology of Mars.

“This finding implies that volcanic eruptions occurred in this region 300 million years ago, which is very recent at a geological time scale,” says Professor Gretchen Benedix, also from Curtin.

“It also provides new insights on the structure of the planet, beneath this volcanic province.”

Lagain says that the algorithm, which was co-developed with CSIRO and Curtin computer science researchers, can now also be used on other planetary bodies, as well as in identifying the origins of other Martian meteorite groups.

The researchers are planning to examine the surface of the Moon and Mercury next.

The algorithm can also “be applied to Earth to assist with managing agriculture, the environment and even, potentially, natural disasters such as fires or floods”, according to Lagain.

Originally published by Cosmos as Which craters spat out Martian meteorites?