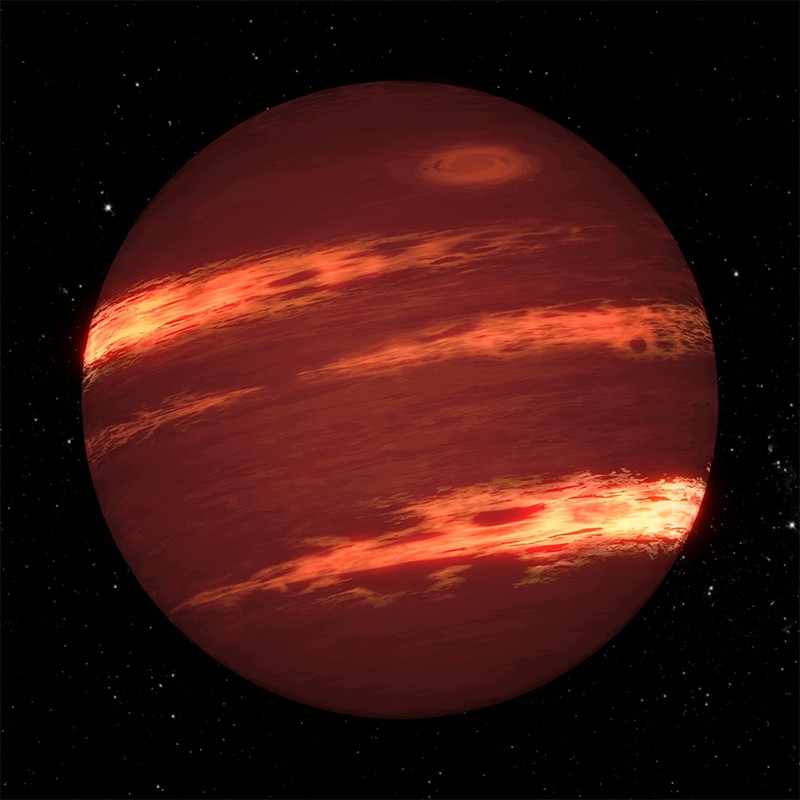 The dimly glowing balls of gas that dot the galaxy known as brown dwarfs – too big to be planets, too small to be stars – have atmospheres beset by strong winds and painted with patchy bands of cloud, according to new research.

Though brown dwarfs are too distant for surface features to be observed directly, astronomers had been puzzled by observations – using infrared radiation, which is most useful for observing these relatively cool objects – that they could rapidly grow brighter and dimmer.

New research from Daniel Apai at the University of Arizona and colleagues, published in Science, looked at six brown dwarfs that were known to change in brightness over time. The researchers used the Spitzer Space Telescope, NASA’s orbital infrared observer, to collect data over several periods of time that added up to 32 rotations of each brown dwarf.

They then used supercomputer modelling of giant waves traveling through the atmosphere to get an idea of what fluctuations in brightness would be expected if a brown dwarf had bands of cloud, much like those seen on the gas giants Jupiter and Neptune, that moved around the planet at different speeds.

The model showed that the cloud bands – which planetary scientists believe are composed of droplets of iron and silicate dust – cause brighter and darker “beats” as they fall in and out of phase with one another, and by adjusting parameters of the model the researchers were able to simulate the observed fluctuations of the six brown dwarfs.

Sometimes known as “failed stars” because they are too small to have collapsed under their own gravity and ignited the hydrogen fusion that powers real stars, brown dwarfs can serve as useful models of giant exoplanets. Unlike exoplanets, which can be hard to observe due to their proximity to bright stars, brown dwarfs are easier to watch.

The lessons learned from brown dwarfs can be applied to future exoplanet studies.

“It is likely the banded structure and large atmospheric waves we found in brown dwarfs will also be common in giant exoplanets,” according to Apai.