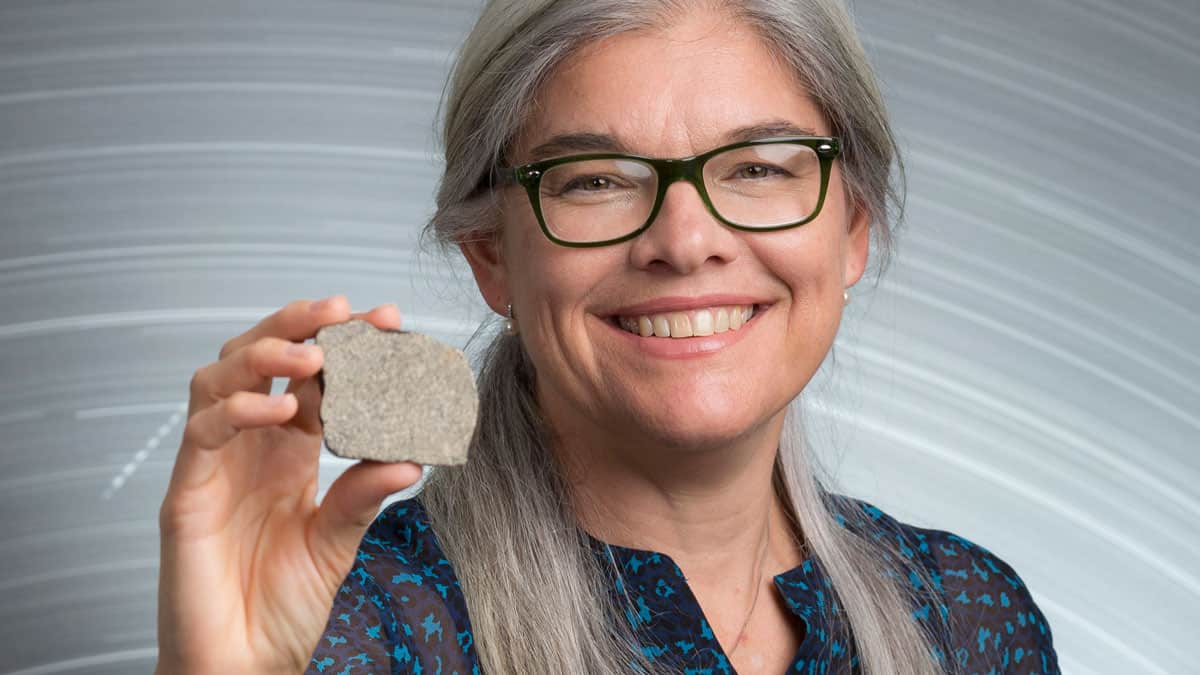 How are we here? Why is the Earth the way it is? The way life arose in our solar system remains a fascinating mystery. Beset but not daunted by kangaroo scat, this astrogeologist – an alumna of NASA’s Astrobiology Institute – is piecing together the origins of life on Earth, meteorite by meteorite.

I was part of NASA’s Astrobiology Institute when it was first formed back in the late 1990s – we were trying to figure out how life forms out in space.

We had biologists, astronomers and geologists all coming together to talk to each other. But we didn’t know each other’s languages. It’s been really interesting over the last 20 years to see how we’ve grown together. We still aren’t totally fluent in each other’s languages – but it makes such a difference when you get to that interdisciplinary place. This kind of collaboration is so important.

My specialty is astrogeology, but I came to it in a roundabout way. I actually started university as a psychology major, but one of my electives was an astronomy unit, and I liked it so much I jumped over to a physics degree.

It was a big change of mindset, but I found it so interesting to think about where we fit in the universe and in the solar system. Along the way I got very interested in particle physics. Then during my master’s I was thinking a lot about the surfaces of asteroids, so I took a couple of geology units to help wrap my head around it, and that was when I went, “Yeah, that’s the thing I’ve got to do. What a great place to be. Rocks in space.” And so I did a PhD in geology.

Part of the reason I’m based in Australia now is a project called the Desert Fireball Network. It’s a bunch of cameras spread out across the Nullarbor Plain that take pictures every night, because there’s material hitting the Earth from space and it’s easiest to see it at night.

These images are very long exposures, and you can get a lot of information from fireballs by the trail they leave. Then the group is able to track the fireball to work out where on the ground the meteorite might land. That’s where I come in. I can look at the rock and tell you a lot about its parent.

When the meteorites come through the atmosphere, they get kind of melted and this forms something like a glassy rind. So you get a very smooth surface. The biggest one we’ve retrieved was about the size of a rockmelon, but they’re not spherical. This is because they tumble as they fall through the atmosphere, and melt preferentially. And because they’re from space they’ve been kind of beaten up as well. So they’re like little jumbled pieces of rock.

A great thing about the Nullarbor is that it’s a big carbonate plain, and carbonate is a very light-coloured rock. And meteorites are generally quite dark coloured – the glass that forms isn’t clear, and the melted elements of the meteorite usually come out very dark, almost black.

Meteorites give us a lot of information about the origin and early history of the solar system. A lot of the rocks we find haven’t experienced a whole lot of geologic processing since they formed. So when we date them we can find out the last time anything significant occurred. And most of the rocks that we get are in the vicinity of four and a half billion years old, which is how we define the beginning of the solar system.

Some of these rocks give us the original elemental composition of the cloud of dust and gas that collapsed to become the solar system. What is really important is we can compare other things to that original composition, so you can say something about the geologic processing that has occurred over time. The more rocks we find, the more we can have a really good working theory of how the solar system formed.

That’s the thing with meteorites. We can have these really primitive ones. And then we have other ones that have experienced some kind of evolution, similar to Earth, where it’s been kind of converted – perhaps the whole thing melted and then you get separation of densities of materials. We can learn a lot about how planet formation works from those things.

Why is the Earth the way it is? If we look at the history of the Earth, we can see there’s always been quite a bit of water, and water is the most efficient catalyst in life, forming chemical reactions. So if you have water present, and you have the organic materials present, all you need is an energy source and you’re likely to kick things off.

There’s obviously organic material here on Earth – and we know there’s organic material in meteorites. It just hasn’t gone the full way into turning into life – not even single-celled organisms exist, as far as we can tell. So we’re trying to figure out why Earth is the way it is, and what that really means. Why are we here? What is it about this place that makes it that we’re able to survive here, and all the things that have evolved from a single-celled organism up to where we are now?

We’re working towards finding those answers, rock by rock.

Originally published by Cosmos as School of rocks Gretchen Benedix is a professor in the School of Earth and Planetary Sciences at Curtin University, Perth. She is a cosmic mineralogist and astrogeologist using the chemistry, mineralogy, spectroscopy and petrology of meteorites to understand the formation and evolution of asteroids and other planets.