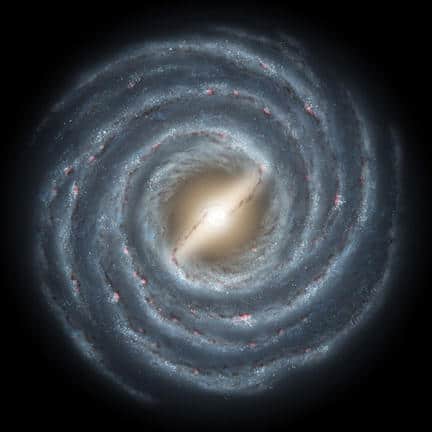 Some of the oldest stars in our galaxy have been spotted lurking around its centre – and behaving very strangely indeed.

An international team of astronomers not only picked out stars more than 10 billion years old orbiting the Milky Way's central "bulge", but also mapped their seemingly random movements.

The bizarre orbits, published in The Astrophysical Journal Letters, suggest those ancient stars weren't born anywhere near the centre of the galaxy and tell us a lot about the Milky Way's formation and youth.

A type of ancient star, RR Lyrae stars are a staple of astronomy. They're called "periodic variable" stars, meaning they pulsate like beacons regularly – around once a day. And it's this reliable brightening and dimming that allows astronomers to calculate distance.

RR Lyrae stars are often found in dense balls of stars orbiting the centre of a galaxy. The Milky Way has around 140 of these "globular clusters" circling its central bulge in a region called its halo.

But the RR Lyrae stars within are moving targets, and astronomers have found it tricky to trace their path and hence, their velocity.

They assumed RR Lyrae stars would follow the same orbit as a burger-bun-shaped group of stars around the central galactic bulge called the "bar". The bar is dominated by young stars which all orbit in the same direction, with the hydrogen gas surrounding it following suit.

To see what RR Lyrae stars are up to, Andrea Kunder of the Leibniz Institute for Astrophysics Potsdam in Germany and her colleagues painstakingly teased out the velocity of stars from the Bulge RR Lyrae Radial Velocity Assay (BRAVA) survey, fed by observations taken with the Anglo-Australian Telescope at the Siding Spring Observatory in Australia.

Surprisingly, they found the old timers bucked the trend.

Rather than orbiting nicely with the young stars, they zoomed around haphazardly in long-ranging looping paths – behaviour consistent with forming far from the centre of the Milky Way, then hurtling towards it.

Juntai Shen of the Shanghai Astronomical Observatory in China, and co-author of the study, says: "[RR Lyrae stars] account for only 1% of the total mass of the bar, but this even more ancient population of stars appears to have a completely different origin than other stars there, consistent with having been one of the first parts of the Milky Way to form."

Next, the team plans to measure metal levels in the RR Lyrae stars to get a better handle on their history.

Because metals (that is, elements heavier than helium) are produced in stars, each generation collects more metals, and younger stars tend to contain more. Old stars, such as RR Lyrae stars, are thought therefore to be metal-poor.

"We can probe an early epoch inner galaxy that was formed before […] the bar," the researchers write. And give us a glimpse into how the Milky Way formed more than 13 billion years ago.