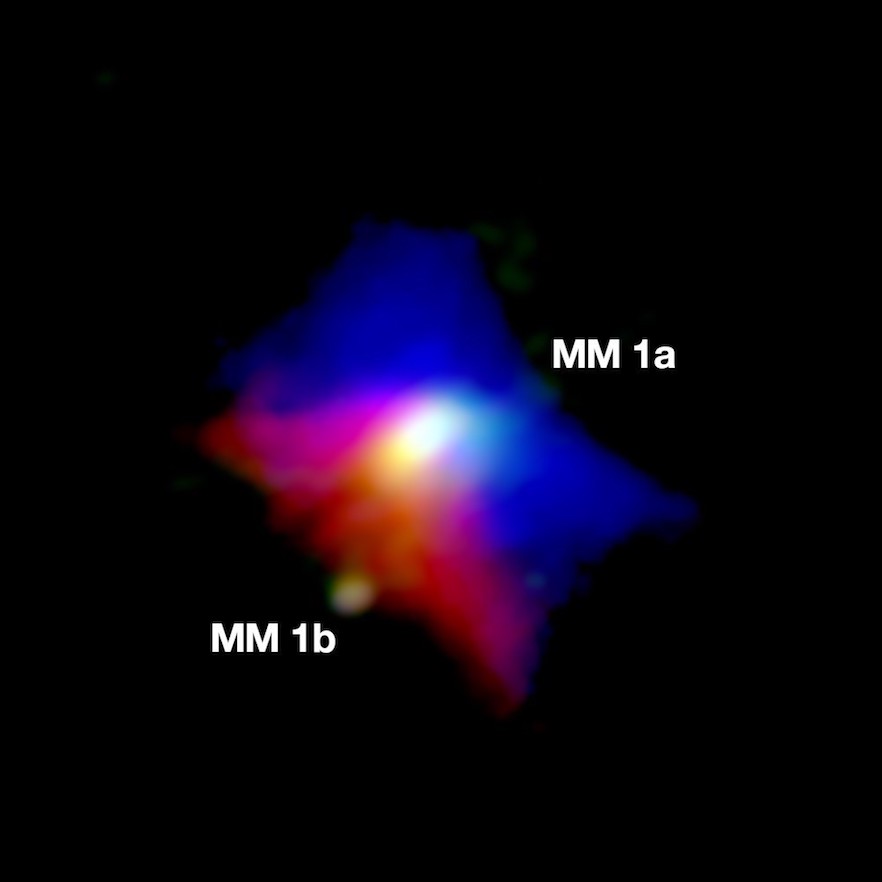 Astronomers observing a massive young star have been surprised to discover that it is simultaneously birthing a smaller sibling.

In a paper published in the journal Astrophysical Journal Letters, a team led by John Ilee from the School of Physics and Astronomy at the University of Leeds, UK, report the discovery of faint object orbiting a star dubbed MM 1a.

The star was chosen for observation because it is surrounded by a large rotating cloud of gas and dust – the raw material from which stellar objects form.

“When these clouds collapse under gravity, they begin to rotate faster, forming a disc around them,” explains Ilee.

“In low mass stars like our sun, it is in these discs that planets can form. In this case, the star and disc we have observed is so massive that, rather than witnessing a planet forming in the disc, we are seeing another star being born.”

The sibling star, called, logically enough, MM 1b, has a mass about one half that of the sun. Its parent star, in contrast, constitutes about 40 solar masses.

The combination of the two stars can be regarded as a binary system, a set-up not unusual in the universe. This one, however, is different.{%recommended 7824%}

“Many older massive stars are found with nearby companions,” says Ilee.

“But binary stars are often very equal in mass, and so likely formed together as siblings. Finding a young binary system with a mass ratio of 80:1 is very unusual, and suggests an entirely different formation process for both objects.”

Further research may reveal that tiny MM 1b has its own dusty disc, which could coalesce into planets. If so, they will very likely be in for what in cosmic terms constitutes a brutally short life.

“Stars as massive as MM 1a only live for around a million years before exploding as powerful supernovae,” explains Ilee, “so while MM 1b may have the potential to form its own planetary system in the future, it won’t be around for long.”

A full pre-peer-review version of the paper is available in the repository Arxiv.