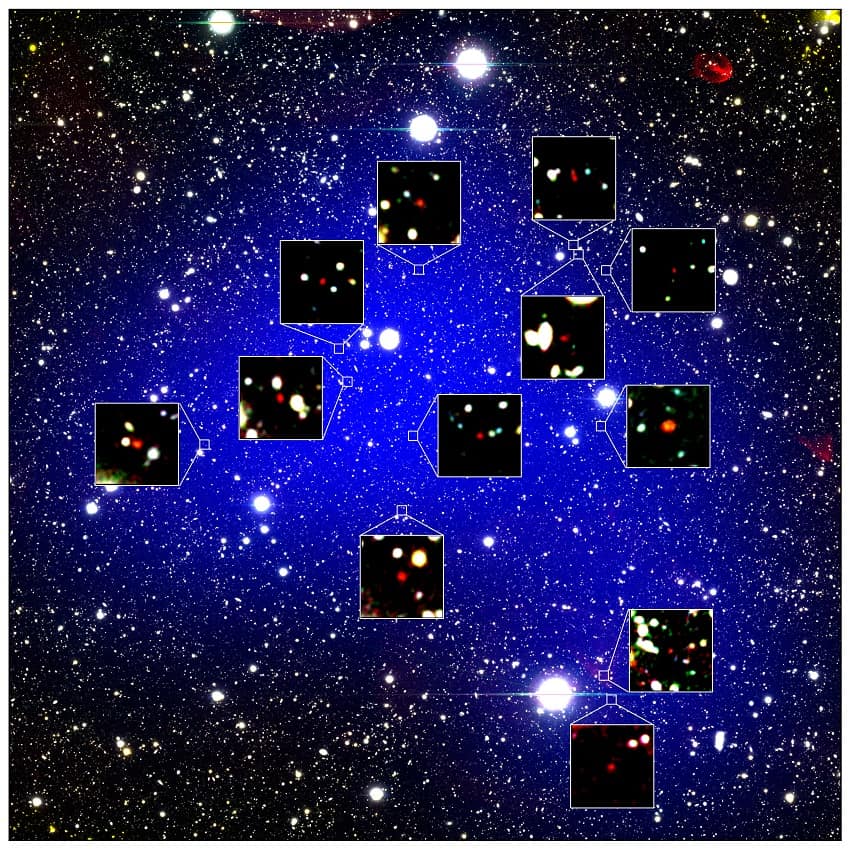 The calculated extent of the protocluster. See the bottom of the article for image details. Credit: Naoji/Harikane et al

Astronomers peering at the most distant parts of the Universe have found the earliest known cluster of galaxies, formed only 800 million years after the Universe first exploded from the Big Bang, 13.8 billion years ago.

In astronomy, distant objects appear red, due to shifts in their light during the expansion of the Universe. The amount of this red-shift allows astronomers to determine how far away these objects are, and from that work out how long their light has been traveling through space before reaching us.

The ancient cluster was spotted by an international team of scientists using a trio of the world’s largest ground-based telescopes – the Subaru, Keck, and Gemini telescopes, all of which have apertures in the 8-10 metre range and are situated atop Hawaii’s 4,200-meter Mauna Kea volcano.

The finding is the “world record” for the most distant known cluster of galaxies, says Hideaki Fujiwara, the staff scientist in charge of public relations at the Subaru Telescope.

But it’s more than that, he says, because the discovery shows that galaxy clusters already existed when the Universe was only 800 million years old, or six percent of its present age.

The cluster, which bears the arcane name z66OD, contains 12 galaxies, one of which is a giant known as Himiko, which was discovered a decade ago and named for a mythological queen in ancient Japan. The other 11 galaxies, the scientists say, could therefore be thought of as a “Queen’s court” attending the monarch.

Today’s galaxy clusters are much larger, often with hundreds of members. But by studying ancient ones, the scientists say, it is possible to understand how they grew from infant “proto” clusters into the large ones we see today.

One of the mysteries of z66OD is its relationship with Himiko.

“It is reasonable to find a protocluster near a massive object, such as Himiko, says Masami Ouchi of the National Astronomical Observatory of Japan, who is a member of the discovery team. “However, we’re surprised to see that Himiko was not located in the centre of the protocluster, but on the edge, 50 million light years away from the centre.”

However, he says, mythological queen Himiko was also said to have lived clustered away from her people, an unexpected similarity to the galaxy named for her.

Meanwhile, Ouchi adds, the Himiko galaxy’s off-center location is a clue that “will be a key for understanding the relationship between clusters and massive galaxies.”

Originally published by Cosmos as A long time ago in 12 galaxies far, far away…