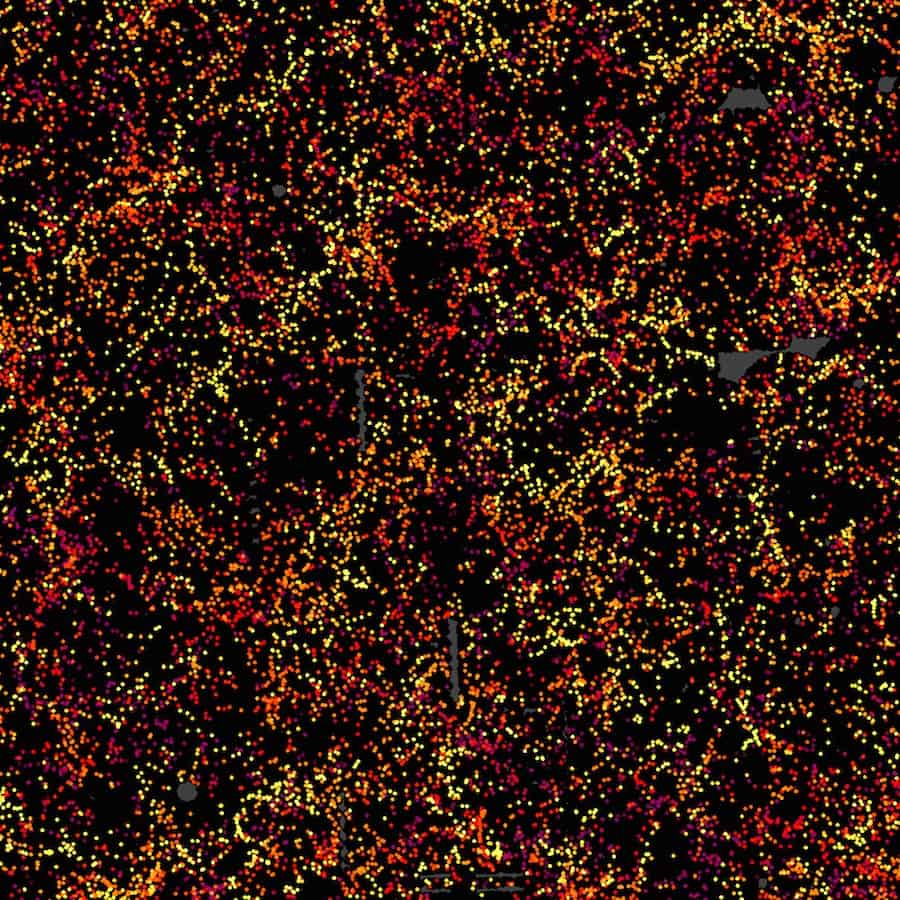 Astronomers have created the largest-ever three-dimensional map of distant galaxies in the hope of making more precise measurements of the dark energy driving the accelerated expansion of the universe.

“We have spent a decade collecting measurements of 1.2 million galaxies over one quarter of the sky to map out the structure of the Universe over a volume of 650 cubic billion light-years,” says Jeremy Tinker of New York University, a co-leader of the team from the Sloan Digital Sky Survey III (SDSS-III).

“This map has allowed us to make the best measurements yet of the effects of dark energy in the expansion of the universe. We are making our results and map available to the world.”

New measurements included in the map were carried out by the Baryon Oscillation Spectroscopic Survey (BOSS) program of SDSS-III.

The map allows astronomers to measure the expansion rate of the universe along with the amount of dark matter and dark energy there.

The project is documented in a series of papers in the Monthly Notices of the Royal Astronomical Society.

BOSS works by determining the size of the baryon acoustic oscillations (BAO) – fluctuations in the density of visible matter in the universe.

The original BAO size is determined by pressure waves up to when the universe was just 400,000 years old. That is used as a yardstick to measure the distance separating galaxies, that astronomers call the acoustic scale.

Measuring the distribution of galaxies since that time 13.48 billion years ago allows astronomers to measure how dark matter and dark energy have governed the rate of expansion of the universe.

“Measuring the acoustic scale across cosmic history gives a direct ruler with which to measure the universe’s expansion rate,” says Ariel Sanchez of the Max-Planck Institute of Extraterrestrial Physics.

“With BOSS, we have traced the BAO’s subtle imprint on the distribution of galaxies spanning a range of time from two to seven billion years ago.”

“If dark energy has been driving the expansion of the universe over that time, our maps tell us that it is evolving very slowly if at all: the change is at most 20% over the past seven billion years,” says Florian Beutler of University of Portsmouth, who led two of the papers on the project.

The map also reveals galaxies moving towards regions of the universe with more matter, due to the attractive force of gravity.