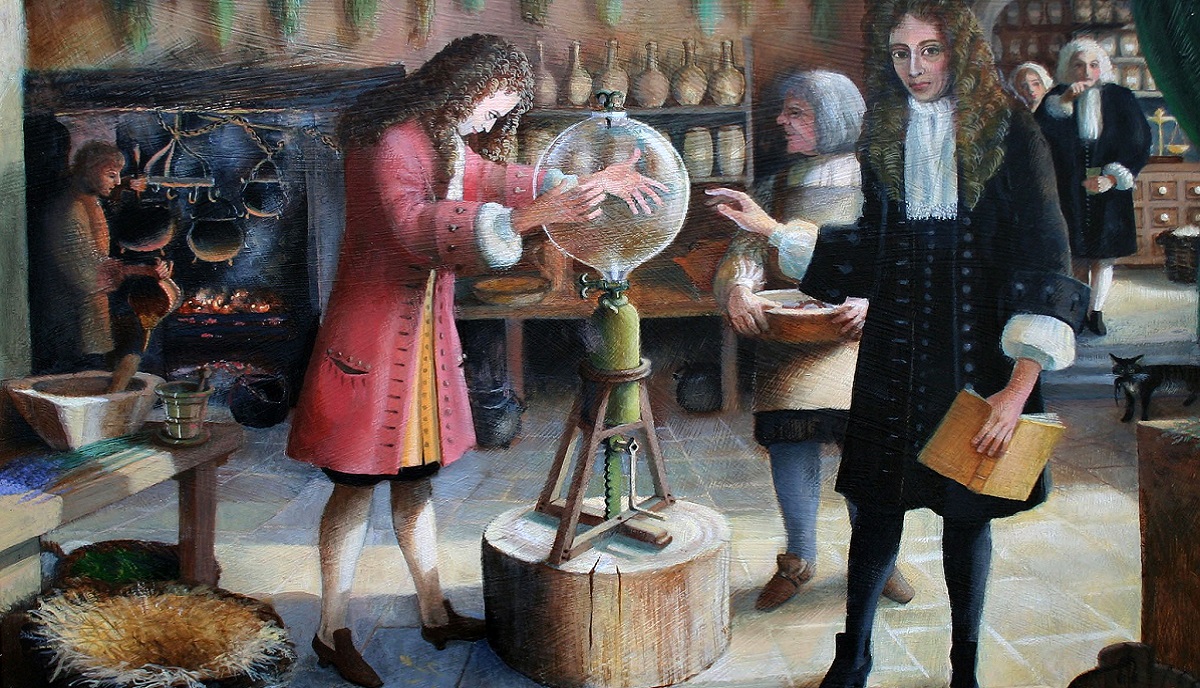 There are no known portraits of Robert Hooke. This painting of him setting up an experiment at Christ Church, Oxford, watched by Robert Boyle, is by history painter Rita Greer.

Robert Hooke was one of the greatest scientists of the 17th century. Think about that.

Hooke was born in England, at Freshwater, on the Isle of Wight, on 18 July 1635, and died in London on 3 March 1703. His contemporaries included the following.

Christopher Wren, born at Knoyle, Wiltshire, in southwest England, on 20 October 1632. His reputation as one of the greatest architects of his time overshadowed his abilities as a mathematician.

Gottfried Wilhelm Leibniz, born on 1 July 1646 in Leipzig, Germany, at the time part of the Holy Roman Empire. The Stanford Encyclopaedia of Philosophy calls him “one of the great thinkers of the 17th and 18th centuries”.

And, of course, Isaac Newton, whose birth date is given variously as 25 December 1642 and 4 January 1643. Born in Woolsthorpe, Lincolnshire, England, he is called by the Encyclopaedia Britannica, “the culminating figure of the Scientific Revolution of the 17th century”.

As for Hooke, historian Allan Chapman gave a lecture to the Royal Institution of Great Britain in 1996, titled “England’s Leonardo: Robert Hooke and the art of experiment in Restoration England”.

Hooke “was an extraordinarily quick learner, possessed a manual dexterity which enabled him to build an impressive array of mechanical devices”, Chapman says.

One of the devices for which he is best known is the microscope; he designed several of excellent quality and their use formed the basis for his book, Micrographia, published in 1665.

“He observed organisms as diverse as insects, sponges, bryozoans, foraminifera, and bird feathers,” says an article published by the University of California at Berkeley Museum of Paleontology (UCMP), adding that “Micrographia was an accurate and detailed record of his observations, illustrated with magnificent drawings”.

With his microscope, Hooke discovered plant cells. “What Hooke saw were the cell walls in cork tissue,” the UCMP says. “In fact, it was Hooke who coined the term ‘cells’.”

Hooke was schooled at home by his father, John, a parish curate, until his early teens. Even untrained, he displayed such talent at detailed drawing, it was suggested to his father that young Robert could have a career as an artist.

At age 13, however, he was allowed to move to London and attend the Westminster School, and from there he received a scholarship to attend Christ Church, Oxford University.

At Oxford, he formed influential and creative friendships, Chapman says. He was encouraged to study astronomy, mathematics and mechanics, and was employed as a chemical assistant and given training in anatomy and dissection, “which would be essential in his own later researches into respiration”.

Chapman says that, “as a man of acknowledged talent as a practical exponent of the ‘new philosophy’, Hooke was the obvious choice for the office of Curator of Experiments to the newly chartered Royal Society of London in 1662”, responsible for demonstrating new experiments at the society’s weekly meetings.

“But we must not forget that at this early stage in his career, he did not sit with the Fellows,” Chapman adds. He was an employee, or servant, with a salary.

He was not a gentleman, with independent means, although in 1665 he was appointed professor of geometry at Gresham College and had become a full Fellow of the Royal Society.

He served as chief surveyor and helped Wren rebuild London after the Great Fire of 1666. As the UCMP says, he also “worked out the correct theory of combustion; devised an equation describing elasticity that is still used today (Hooke’s Law); assisted Robert Boyle in studying the physics of gases; and invented or improved meteorological instruments such as the barometer, anemometer, and hygrometer”.

And yet, for all this, there are no known portraits of Hooke in existence.

One of the popular theories about why Hooke today is less well known than many of his contemporaries, despite his tremendous accomplishments, is attributable to a feud with Isaac Newton.

An article published by the University of St Andrews School of Mathematics and Statistics in Scotland says Hooke had “a bitter dispute with Newton” over several points of difference.

“When Newton produced his theory of light and colour in 1672, Hooke claimed that what was correct in Newton’s theory was stolen from his own ideas about light of 1665, and what was original was wrong. This marked the beginning of severe arguments between the two.”