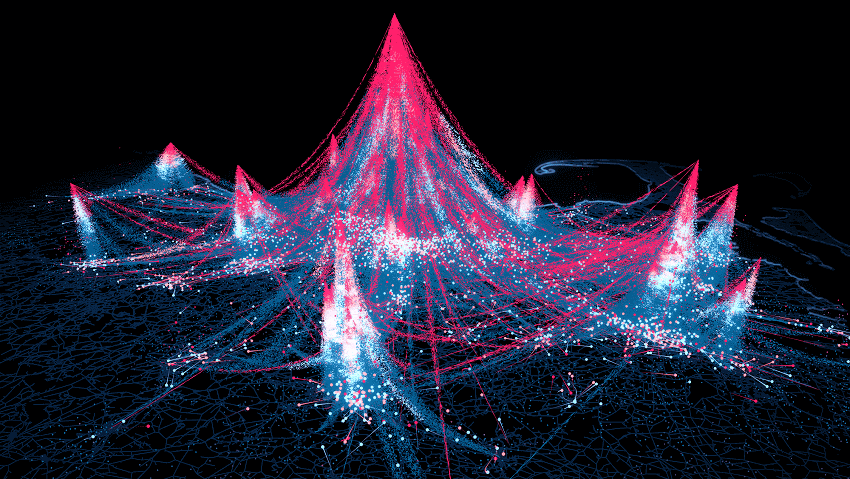 How people move around cities follows a predictable and universal pattern, scientists say, which will be crucial not only for urban planning but also controlling pandemics.

By analysing mobile-phone tracking data from across four continents, the team confirmed that people visit places more often when they don’t have to travel far to get there.

“We might shop every day at a bakery a few hundred metres away, but we’ll only go once a month to the fancy boutique miles away from our neighborhood,” says co-author Carlo Ratti, from the Massachusetts Institute of Technology (MIT).

“This kind of intuitive notion had never been empirically tested. When we did it we found an incredibly regular and robust law – which we have called the visitation law.”

The new paper, published in Nature, looked at mobile phone data from cities across the globe between 2006 and 2013, including Boston in the US, Singapore, Abidjan on the Ivory Coast, Dakar in Senegal, and two cities in Portugal. Phone data is useful for this kind of study as it shows both an individual’s residence area and the destinations they go to on a large scale – the research looked at over 8 billion pieces of location data from more than 4 million people.

Even though each city is very different, the numbers of individuals visiting different locations was consistent, with frequency of visits declining over longer distances and higher-density areas filled with people who had taken shorter trips.

Deviations from the pattern were usually associated with specific locations like ports or theme parks.

From this data, the research team devised a model of human movement in which people seek out the closest places offering a particular type of activity.

“There is a very clear inverse relationship between how far you go and how frequently you go there,” says Paolo Santi, co-author of the study from MIT. “You only seldom go to faraway places, and usually you tend to visit places close to you more often. It tells us how we organise our lives.”

Studies like this are important because human movement is fundamental to how our societies work.

“It enables social, economic and cultural exchanges, shapes the form of cities, gives rise to traffic congestion and pollution, and fuels the spread of contagious diseases,” the authors explain in their paper.

Ratti says that their new law could therefore have many practical applications, from designing new infrastructure to traffic planning to urban planning to containing disease.

“For instance, it could help implement the concept of the ‘Fifteen-Minute City,’ which aims to reorganise physical space around walkable neighborhoods and which has become very popular during the COVID-19 pandemic. Our law suggests that we can indeed capture a large fraction of all urban trips within a fifteen-minute radius, while leaving the rest – perhaps 10 percent – further away.”

In an accompanying News & Views article, Laura Alessandretti and Sune Lehmann from the Technical University of Denmark note that “research into human mobility has flourished in the past few years, as a result of data becoming available with increasingly fine spatial and temporal resolution”.

This new research identifies a key component missing from previous models – visitation frequency, which is the number of trips someone makes to a location in a certain chunk of time.

But there are several unanswered questions, Alessandretti and Lehmann point out, including whether the movement patterns also apply outside urban areas:

“The geographies of rural areas are less centralised and contain fewer places of interest to visitors than do urban areas; these characteristics might result in travel patterns different from those observed.”

The project was a collaboration between the Santa Fe Institute, MIT and ETH Zürich.