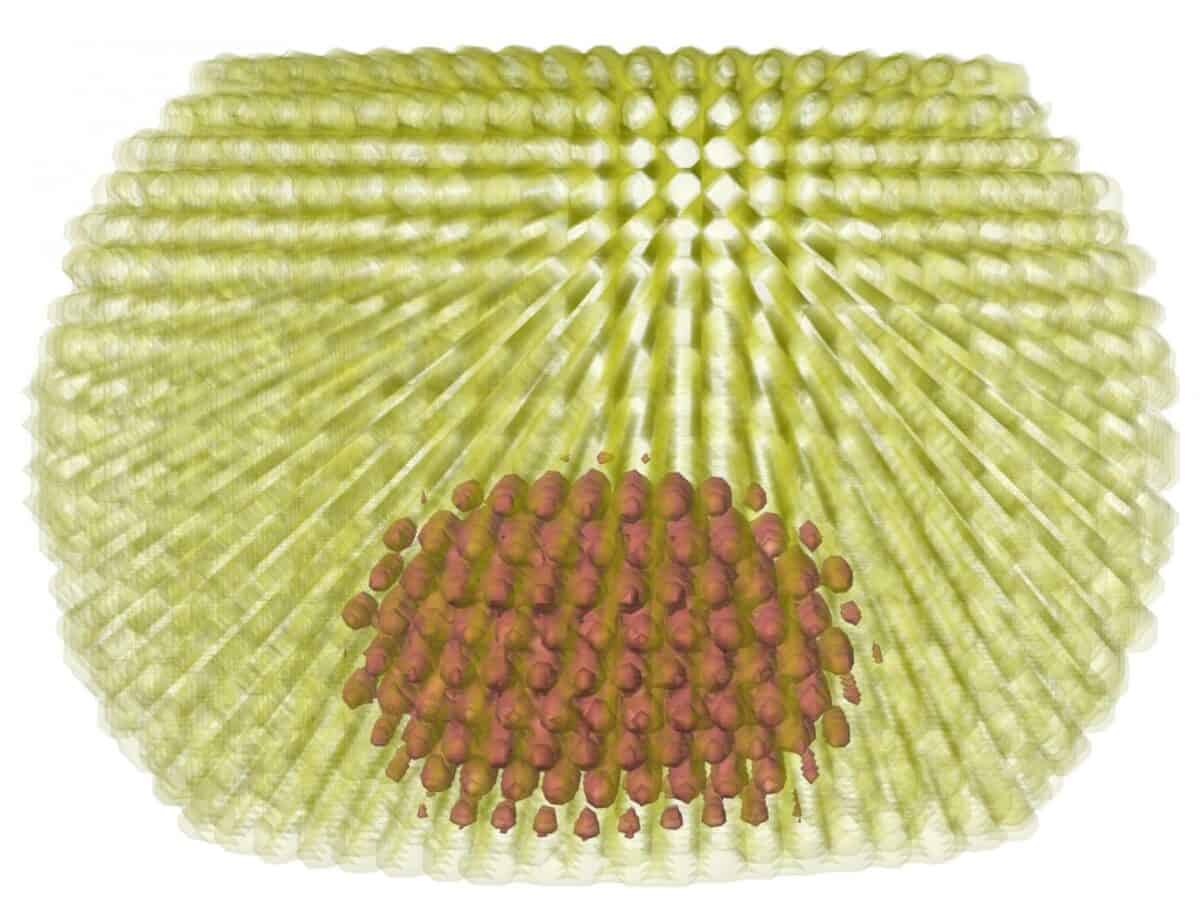 This computer-generated model shows the spherical core of the quantum dot nanoparticle (in red) along with the 'flying saucer' shape of the outer shell (in yellow). The tension in the core induced by the shell affects the electronic states and lowers the energy threshold required to trigger the laser. Credit: Dr. Alex Voznyy/U of T Engineering

Don’t look now, but billions of nanoscale flying saucers are about to spread around the world.

The cause, however, isn’t a sudden doomed invasion by scale-challenged aliens. It’s the result of a really rather clever refinement in laser technology.

An international team drawn from the University of Toronto, Vanderbilt University, the Los Alamos National Laboratory and others reported this week in Nature that it had solved a 15-year-old problem with quantum dots, clearing the way for brighter lights, better ways to image living cells and more accurate medical tests.

Quantum dots are very tiny semiconductor particles, just a few nanometers wide. They are beloved by nanotechnologists because their size means they exist at the intersection of classical and quantum physics, demonstrating the properties of both worlds.

A decade and half ago a team led by Victor Klimov at Los Alamos created quantum dots suspended in liquid. These so-called “colloidal” dots, 5000 times smaller than the width of a human hair, produced ultra-bright laser light – far more intense than standard laser technologies – when hit by an electrical current.

It was a spectacular result, but one that seemed to have little or no practical application. The amount of energy required to get the quantum dots working was prohibitively huge – and the bursts of light lasted just a few billionths of a second.

“You have to stimulate the laser using more and more power, but there are a lot of heating losses as well,” explains team member Alex Voznyy. “Eventually it gets so hot that it just burns.”

Now, however, Klimov and his collaborators have overcome these limitations to create bright-light colloidal quantum dots that are both cheap and robust to operate. The key, it turned out, lay in redesigning their shape.

Traditionally, quantum dots are spherical. Klimov’s team retained this shape for the dots’ cores, but added a squashed outer layer – a shape reminiscent of a flying saucer, or a Smartie. The variation in shape between the core and the outer region affects the possible electronic states of the dot, which in turn results in a much lower charge needed to create light. Because of this, the risk of the dots overheating is also greatly reduced, meaning they can run continuously.

The other great advantage is that when used to create laser light, the quantum dots are tuneable, so can be set to any required wavelength. This opens a wide range of possible applications, from cell imaging to improved video projection. The team acknowledge their success represents just proof-of-concept at present. Future research will look at refining input power in order to prepare for commercialisation.

Originally published by Cosmos as Flying saucers with lasers are real. Sort of.