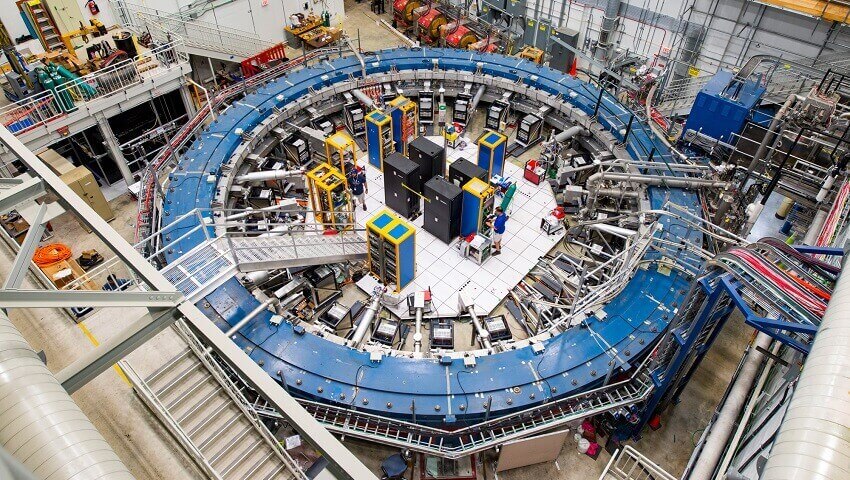 The team – comprising over 200 physicists from seven countries – sent these subatomic particles zipping around an intensely magnetised track at the Fermi National Accelerator Laboratory (Fermilab) in the US. After analysing 8.2 billion races around the track, they found that the “wobble” of the muon’s spin didn’t match predictions.

This means muons may be influenced by particles or forces we haven’t yet discovered, adding to a growing body of evidence that new physics may be at work.

What are muons, anyway?

Muons are subatomic particles that are very similar to electrons, but 200 times heavier and much quicker to decay, vanishing a couple of microseconds after forming. They’re naturally formed when cosmic rays hit the Earth’s atmosphere, and can be created in large quantities by particle accelerators like those at Fermilab.

By a quirk of nature, muons have a property called spin, making them behave like a tiny magnet. When subject to a strong magnetic field, their spin precesses (or wobbles), much like the axis of a spinning top or gyroscope. Precisely how much a muon should wobble can be predicted by the Standard Model of Particle Physics – the “rulebook” of how particles and forces should behave, painstakingly compiled by physicists over the past few decades.

What did the experiment show?

The new Fermilab experiment – called Muon g-2 – watched how muons wobbled in a magnetic field in order to precisely measure their magnetic moment (that is, the strength of their intrinsic magnetism). The result: the experimental value of the magnetic moment was found to deviate from theory by a miniscule amount (0.00000000251).

This is the most precise measurement of the muon’s magnetic moment yet, and even the tiny discrepancy has got physicists around the world teetering between excitement and caution – because it could still be enough to shift the course of particle physics.

Here’s why: muons aren’t the only particles out there. As they race around the Muon g-2 track, they interact with a sea of other subatomic particles that constantly pop in and out of existence, causing the muons’ precession to either slightly speed up or slow down. The Standard Model’s predictions correct for this buzz of other particles – but only the ones it knows about. If there are additional particles or forces present that we haven’t yet discovered, they could affect the precession of the muons even further. The extent to which experimental values deviate from predictions can therefore indicate just how much we are yet to discover about the universe.

“This quantity we measure reflects the interactions of the muon with everything else in the universe,” explains Renee Fatemi, simulations manager for the Muon g-2 experiment and physicist at the University of Kentucky.

“But when the theorists calculate the same quantity, using all of the known forces and particles in the Standard Model, we don’t get the same answer. This is strong evidence that the muon is sensitive to something that is not in our best theory.”

What does this add to what physicists previously knew?

This is not the first time physicists have seen evidence for muons acting strangely. In 2001, the E821 experiment at Brookhaven National Laboratory in the US first detected hints that the muon’s magnetic moment differed from theory. Their results were reported with a statistical significance of 3.3 sigma – meaning that there was a one in 1,000 chance that the observations were pure chance.

In the 20 years since, particle physicists have been performing further experiments to determine whether this anomaly is chance or something real. This new experiment from Fermilab provides the most precise measurement of the muon’s magnetic moment yet, with the highest statistical significance.

But it’s still not an official discovery. The team reported their results with a statistical significance of 4.2 sigma, which means there’s a one in 40,000 chance of this observation being a fluke. The gold standard in particle physics – marking a true discovery – is a confidence level of 5 sigma, corresponding to a one in 3.5 million chance of an observation being a fluke.

More experiments must be done to hit this holy grail of 5 sigma and officially claim these findings as a discovery – similar to the landmark moment in 2012, when the discovery of the long-theorised, mass-giving Higgs Boson sent the world of physics into a spin. The next step is independent confirmation, likely from an experimental set-up that can measure the muon’s magnetic moment in a different way, such as the Japan Proton Accelerator Research Complex (J-PARC).

“There could be a renewed effort to look for muons at the Large Hadron Collider, searching for possible hints of the new physics,” says Carlos Wagner, a theoretical physicist at Argonne National Laboratory in the US. “There could also be renewed interest in the construction of a muon collider, which could provide a direct way of checking this new physics.”

However, even if further experiments confirm that we are seeing new physics, they won’t yet be able to tell us what it actually is. This may require a new collider to be built in order to discover the properties of the unknown muon-influencing particle or force.

Could there be even more new physics we don’t know about?

Absolutely. Just last month, a different but equally intriguing result came from observations made at the Large Hadron Collider in Europe. Scientists analysed 10 years of data on B mesons – unstable particles that rapidly decay – and found that they break down into unexpected proportions of different particles. Instead of producing electrons and muons at the same rate, as the Standard Model predicts, electrons appear to be produced preferentially.

The result has a significance of 3.1 sigma (one in 1,000 chance of being a fluke), but if it’s confirmed it could also mean that something further needs to be added to the Standard Model, such as a new quantum force that prevents B mesons decaying into muons at the expected rate.

In the case of both results, physicists are remaining optimistic – but cautious.

Fermilab’s announcement has already prompted theorists to try and incorporate the new findings into their models. One group, publishing in Nature, suggests that the new magnetic moment estimate could be in line with the Standard Model and so may not actually require new physics to explain.

Either way, this result – and the work that will follow – will deepen our understanding of the underlying fundamental laws of the universe.