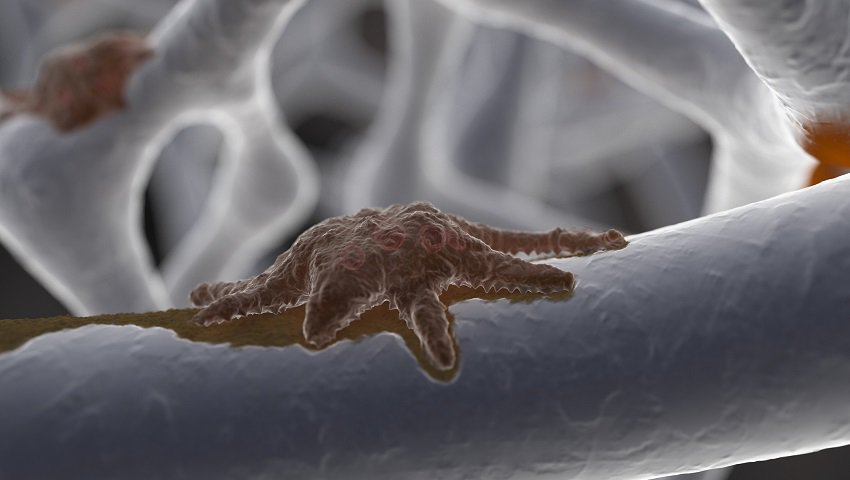 A new bone cell discovery suggests that even cells make an effort to recycle.

A team of researchers, led by Michelle McDonald at the Garvan Institute of Medical Research and University of New South Wales, discovered a new type of bone cell – called an osteomorph – that may help develop new therapeutic approaches to relieve osteoporosis and other bone diseases.

Bones undergo constant maintenance to remove old bone cells and build up new ones. When this process doesn’t work correctly, it can lead to bone disease and osteoporosis, which affects over 900,000 Australians.

“This discovery is a game-changer, which not only helps us understand bone biology but presents significant new in-roads for osteoporosis therapy,” says co-senior author Tri Phan.

“Osteomorphs express several genes that seem to be linked to bone disease, which could lead scientists to entirely new ways to target osteoporosis.”

Cells called osteoclasts normally break down old bone cells to release calcium into the blood, but when this doesn’t happen correctly it can lead to bone disease. It was previously thought that the cells would die after they had finished their job.

To learn more about this, the researchers used an imaging technique called intravital imaging to look right inside living bone tissue. As they show in their paper, published in Cell, the authors saw that some of the osteoclasts didn’t die, but recycled themselves by undergoing fission – dividing – to break into osteomorphs.

These new cells express genes in a different way and focus on switching on genes associated with bone function and structure that are not used in the osteoclasts.

“The profile of genes that were switched on in these cells was really interesting – while many genes were also expressed by osteoclasts, several were unique,” says co-author Weng Hua Khoo, also of the Garvan Institute.

“This, together with the evidence of the new re-fusion processes observed by intravital imaging, convinced us that we had discovered a new cell type, which we called osteomorphs, after the Mighty Morphin Power Rangers.”

When they are ready, the osteomorphs once again recycle themselves by fusing back into osteoclasts and starting the cycle again.

“This process was completely new to us,” says McDonald. “The consensus until now has been that osteoclasts undergo cell death after they’ve done their job, but we saw they were recycling by splitting up and joining back together again, a process which we hypothesise may increase their lifespan.

“We also found these cells in the blood and bone marrow, suggesting they can travel to other parts of the skeleton, as a likely ‘reserve’ of cells that are ready to fuse and deploy when osteoclasts are needed again.”

Altering the cycle of osteoclast to osteomorph and back may help regulate bone degradation.

“While we don’t yet fully understand the role of osteomorphs, their existence has already led to a major step change in our understanding of the skeleton,” says senior author Peter Croucher.

“This research has been an enormous combined international effort across many scientific disciplines. We look forward to exploring how these cells may change the approach to osteoporosis and other skeletal diseases moving forward.”

Intravital imaging video of an osteoclast splitting into osteomorphs, a new type of cell discovered in bone. Credit: Michelle McDonald.