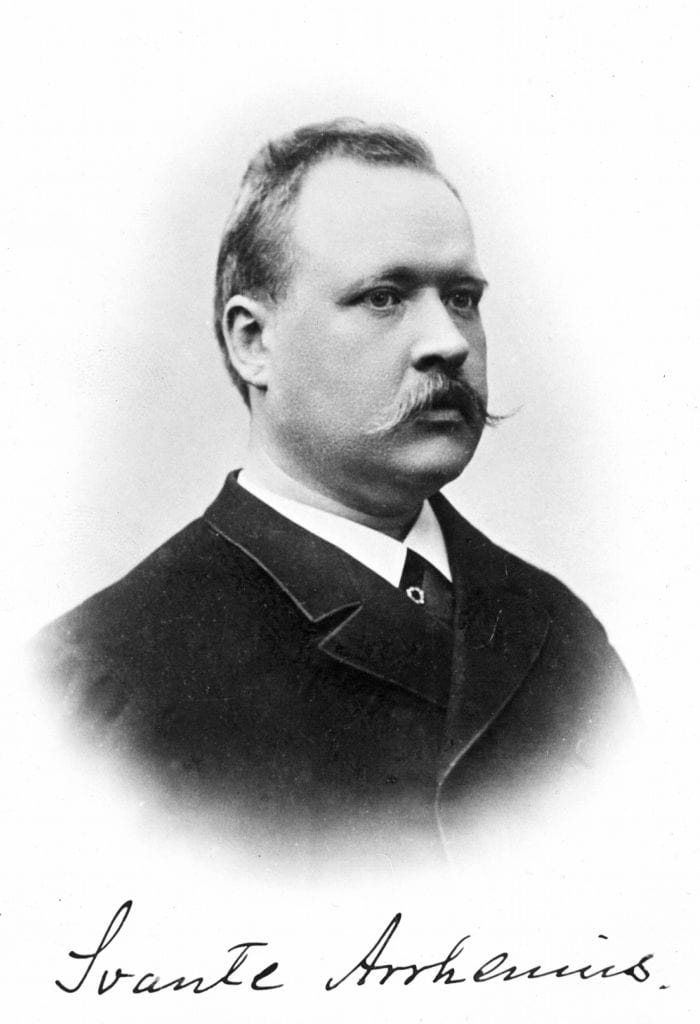 Each year the Royal Swedish Academy of Engineering Sciences produces a commemorative booklet to pay tribute to “a person whose scientific, engineering, economic or industrial achievements were of significant benefit to the society of his or her day”.

The 2008 booklet recognised Svante August Arrhenius, born on 19 February 1859, near Uppsala, Sweden, and recipient of the 1903 Nobel Prize in chemistry, “for his discovery of electrolytic dissociation”. He was the first Swedish Nobel laureate.

The booklet says Arrhenius “is also known as a prescient atmospheric physicist” who, in 1896, demonstrated the effect of “radiatively active gases” (defined by the American Meteorological Society as “a gas occurring naturally or produced anthropogenically that affects atmospheric radiation by absorption or emission”) on planetary surface temperatures.

It says he “made an attempt to quantify what he called the ‘greenhouse effect’, especially of carbon dioxide on the earth’s climate”.

On the Earth Observatory webpages published by NASA, the space agency says Arrhenius “asked the important question, ‘Is the mean temperature of the ground in any way influenced by the presence of the heat-absorbing gases in the atmosphere?’ He went on to become the first person to investigate the effect that doubling atmospheric carbon dioxide would have on global climate. The question was debated throughout the early part of the 20th century and is still a main concern of Earth scientists today.”

NASA notes that Arrhenius’ education and training were not in climate research, but in electrochemistry.

In its biographical entry on Arrhenius, the Nobel Prize organisation says that from an early age he displayed “an aptitude” for mathematics and was “greatly interested” in maths and physics. In 1876 he entered the University of Uppsala, studying mathematics, chemistry and physics, and in 1881 he went to Stockholm to further his physics studies at the Academy of Sciences.

The 2008 booklet describes Arrhenius as “an extremely talented man with an expansive range of interests, both inside and outside the academic domain”.

It explains that his early work “with the dissociation of ionic substances”, which was presented in 1884 in his doctoral thesis, earned him the 1903 Nobel Prize in chemistry, “20 years after his first ideas in this area had been presented orally to a very sceptical and even scornful academic supervisor”.

“The theory of electrolytic dissociation and his kinetic ‘law’ – the Arrhenius equation – made [him] one of the founders of modern physical chemistry.”

The booklet says he was also an early proponent of electricity as a source of energy for homes, industry, transport and more, and advocated for the use of hydroelectric power over coal-fired power generation.

NASA’s Earth Observatory series says Arrhenius did “little research” into climatology and geophysics, “and considered any work in these fields a hobby”.

It says he applied “knowledge of basic scientific principles to make sense of existing observations, while hypothesising a theory on the cause of the ‘ice age’.”

“Later on, his geophysical work would serve as a catalyst for the work of others.”

NASA says that he presented a paper to the Stockholm Physical Society in 1895, titled “On the Influence of Carbonic Acid in the Air upon the Temperature of the Ground”, which “described an energy budget model that considered the radiative effects of carbon dioxide (carbonic acid) and water vapour on the surface temperature of the Earth, and variations in atmospheric carbon dioxide concentrations”.

It says he “relied heavily on the experiments and observations of other scientists”.

NASA says Arrhenius “argued that variations in trace constituents – namely carbon dioxide – of the atmosphere could greatly influence the heat budget of the Earth”.

The space agency says he performed “a series of calculations on the temperature effects of increasing and decreasing amounts of carbon dioxide in the Earth’s atmosphere”, which showed that the “temperature of the Arctic regions would rise about 8°C or 9°C, if the carbonic acid increased 2.5 to 3 times its present value”.

Apart from Arrhenius’ pioneering studies into climate science, the Nobel organisation says his key contribution was in re-establishing “the idea of a connection between electricity and chemical affinity”, which had “so completely vanished from the general consciousness of scientists”.

It says “the fundamental importance” of his “investigations on the galvanic conductivity of electrolytes” led top the creation of a “new branch of science”: physical chemistry.

Arrhenius died in Stockholm on 2 October 1927. He’d been twice married and fathered four children. According to some sources, contemporary Swedish actor Svante Thunberg may be able to trace his relationship to Arrhenius through the scientist’s mother, Carolina Thunberg. Svante Thunberg is the father of teenage climate activist Greta Thunberg.

Originally published by Cosmos as Arrhenius takes the future’s temperature