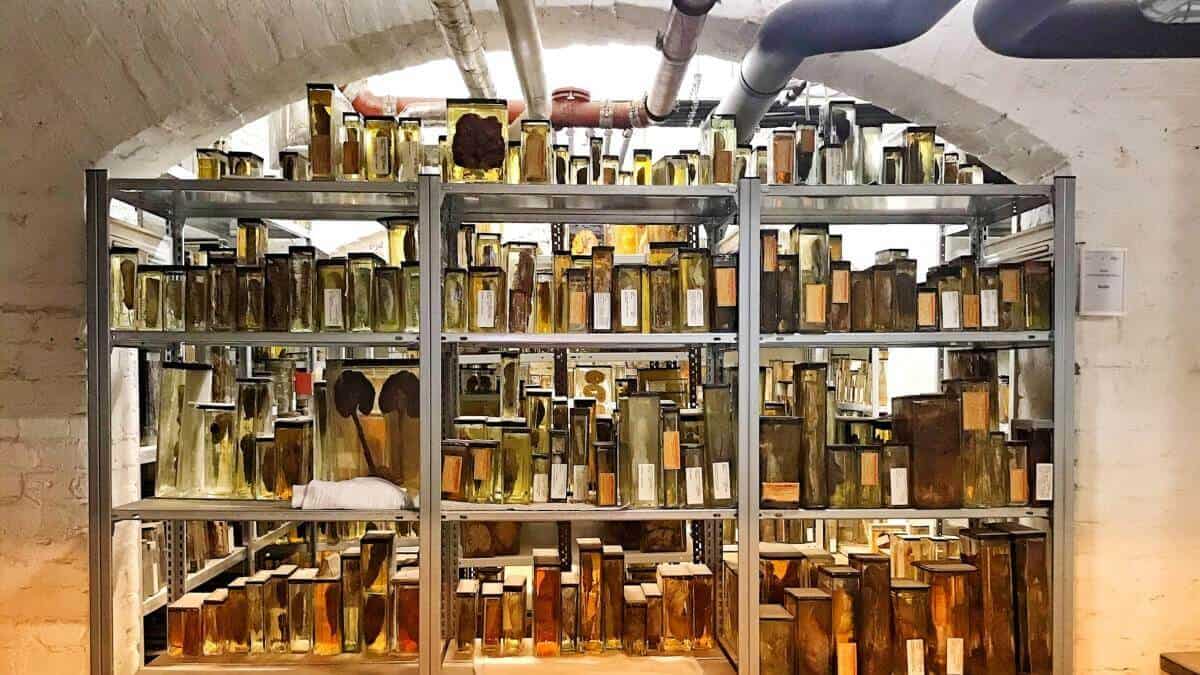 Specimens in the basement of the Berlin Museum of Medical History at the Charité. Credit: Navena Widulin, Berlin
More on:
pandemic

The 1918-19 influenza pandemic killed between 17 million and 100 million people worldwide. But, while some virus genomes have been sequenced and it’s now known to be an H1N1 influenza, there is still a lot of mystery around it. Viral and genetic material typically survives very poorly, leaving many unknowns.

Now, an analysis of newly discovered samples suggests that one of our seasonal influenza strains may be a direct descendant from the virus that caused the 1918 pandemic.

An international team of researchers have discovered influenza in 1918 and 1919 lung samples, kept in museum archives in Berlin. Sébastien Calvignac-Spencer, a researcher at the Robert Koch Institute in Germany and co-author on a paper describing the research, published in Nature Communications, says that the team were investigating lung specimens held in the basement of a local museum, to see if they could extract any information about respiratory viruses the owners had had.

Read more: The man who found the cause of a great epidemic

“Quite honestly, I was not very hopeful. I was wrong, because it worked beautifully from day one. We were quickly able to assemble the complete genome and to collect genome wide information for two other specimens,” says Calvignac-Spencer.

“The Spanish Influenza from 1918 is still a big mystery,” says co-author Thorsten Wolff, also from the Robert Koch Institute.

“So when Sébastien contacted me, saying, ‘Oh, we just found some relics of the virus, more or less in our backyard’, I was completely excited and was interested to look at these genomes.”

The researchers found that the genomes differed significantly from other, previously-reconstructed genomes of the 1918 influenza. There were also a couple of key changes between older and younger versions of the virus, both of which were likely to have made the influenza better at evading the human immune system.

Because the specimens come from before the pandemic’s peak – and then during its apex –they’ve yielded information on how the virus evolved. This evidence implies that modern seasonal H1N1 flu is a descendant of the 1918 flu, having become much less virulent as it evolved.

The samples also show that – just like COVID-19 – the 1918 flu evolved into new strains and dispersed across the globe.

“There was genomic variation during that pandemic too,” says Calvignac-Spencer.

“And when we interpret this variation, we detect a clear signal for frequent transcontinental dispersal. It’s not very surprising in these times, but that’s good to show.

Read more: Could AI predict the next pandemic?

Not all pandemics are equal. In the historic samples, “we also show that there’s not any evidence for lineage replacement between the waves, like we see today with two different SARS-CoV-2 variants that replaced one another.

Nonetheless it offers data about a pandemic’s global possibilities. “Another thing that we uncovered with the sequences and new statistical models is that the subsequent seasonal virus that went on circulating after the pandemic might well have directly evolved from the pandemic virus entirely,” he says.

This contradicts the current most popular hypotheses about the origins of H1N1. Calvignac-Spencer cautions that all their results are provisional, based on small samples as they are.

“A major limitation of this kind of research that we only have very limited sampling. So we have to remain humble.”