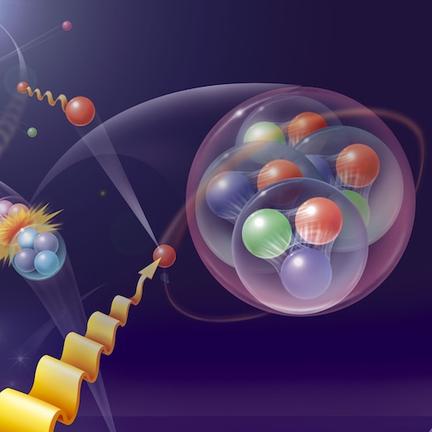 Does quantum physics melt your brain? First, don’t panic. You’re not alone in your confuddlement. As legendary physicist Richard Feynman said: “I think I can safely say that nobody understands quantum mechanics.”

Nevertheless, quantum theory is vital for describing how our world is screwed together.

So we’ve broken down the ideas of quantum theory to the level where even a five-(or 55) year-old can get the gist.

What is quantum theory?

After a few thousand years of argument we finally know what “stuff” is made of – tiny particles called electrons and quarks. These guys gang together in little families to make atoms such as hydrogen or oxygen and molecules such as H2O.

Atoms and molecules are the Lego blocks of our world.

To describe the way this tiny world operates, scientists use a collection of ideas called quantum theory.

The theory makes weird predictions (for example, that particles can be in two places at once), yet it is also the most precisely validated theory in physics.

It underpins much of the technology around us, including the chip that makes your smartphone so smart.

But what does ‘quantum’ actually mean?

Step into your kitchen with a jar of peanut butter in your hand. You could decide to put the jar on the counter-top, or on one of the shelves above it. But you can’t put the jar between shelves – that just doesn’t make sense.

In physics-speak you’d say the shelves of your kitchen are “quantised”. It just means they come in levels.

In the quantum world, everything is split into levels. For example, an electron in an atom can sit in one of a few set “energy levels” – just like shelves in your kitchen. But the quantum world is weird. Give an electron a kick of energy and it will jump instantly from one level to another.

Here’s another analogy. If you drove a quantum car, you might be able to travel at 5 km/h, 20 km/h or 80 km/h, but at no speed in between. Shift gears and you’d suddenly jump from 5 to 20 km/h. The change in speed would be instantaneous, so you wouldn’t even feel the acceleration.

The microscopic world plays by very different rules than the “classical” world we’re used to.

“Classical” is a physicist’s word for “common sense” – when something behaves the way you might expect it to from everyday experience.

A billiard ball is a “classical object” (it rolls along the table in a straightforward way) but a single atom within it follows quantum laws (liable to disappear through the green felt at any moment).

Somewhere between the scale of the atom and the billiard ball there is a crossover point in the laws of physics – a bit like a jurisdictional handover between state and federal police.

Stick enough atoms together and weird quantum effects fade away, the behaviour becomes classical. This is called the correspondence principle.

Some things in quantum physics are literally unknowable. For example, you can never know both where the electron is and where it’s going.

One way to understand this is through the related observer effect – how making a measurement can change the result. For example, to find out where an electron is, you need to detect it with something (for example a photon of light) but this probing, however gentle, will knock the electron off its original course. The electron tells you where it is, but forgets where it was going.

But the uncertainty principle goes much deeper than the observer effect alone. It says there is an innate fuzziness to nature.

Quantum objects (like photons and electrons) have split personalities – sometimes they behave like waves, and sometimes like particles. The way they behave depends on the kinds of questions you ask them (see the “two-slit experiment” below).

A bit of maths that describes what a wave looks like.

Crucially, quantum wave-functions can have many possible solutions – each with a distinct probability of being true.

Amazingly, the different possible answers seem to interact with one another in a sort of limbo of states called superposition – as if conspiring together to give us the reality of our universe (see “two-slits” below).

Imagine a cat in a box along with a vial of cyanide. There is a hammer held by a string above the vial. The hammer is designed to fall when tripped by a random quantum event (for example, the decay of an atom of uranium).

This is the thought experiment dreamed up by Erwin Schrödinger to try to convey the idea of superposition.

The atomic decay follows quantum laws, and so its wave-function has two solutions: decayed or not decayed.

According to quantum theory, until you make a measurement these two possibilities are equally valid. In fact you can consider the atom as both decayed and not decayed at the same time.

Because the cat’s fate is intimately connected to the atom of uranium, until you take a peek, the cat is both alive and dead at the same time.

Entanglement is when two particles (for example photons) are intimately connected so that measurement on one instantly affects the other, no matter how far away it is.

It’s like when you were a kid and your uncle showed you a coloured ball in each hand, then mixed them up behind his back. From your point of view, the two balls were “entangled” – if the red ball is in his left hand, it means the blue ball is in his right.

But the quantum situation is more mysterious because the “balls” don’t have defined colours, they are colour shifting – at any instant they can turn out red or blue with equal chance. It’s totally random.

The weird thing is, looking at one ball kills the randomness (freezes the colour shifting) not just for the one you look at, but for both. If you see a red ball, you know the colour of the other is fixed as blue.

In this way, one entangled particle can seem to affect the other instantly, and no matter how far apart they are. Albert Einstein felt this violated the cosmic speed limit (aka the speed of light) imposed by his relativity theory, and so he gave entanglement the label “spooky action at a distance”.

How does a physicist entangle photons?

There are a couple of techniques. One is to break a high-energy photon into two “daughter photons” of lower energy. Like identical twins in a horror movie, the two daughters possess a mystical connection between them.

Another way is to pass the two photons through a maze of mirrors so that you cannot possibly know which direction each travelled. This “unknowability” creates the entanglement.

Two-slit experiment (an illustration of most of the above)

This is the most famous experiment in quantum mechanics, in which particles (usually electrons or photons) are fired at two slits before being detected on a screen.

It is so famous because it demonstrates many of the weird phenomena mentioned above.

The experiment hinges on the different behaviour of waves vs particles for the same set up.

For example, you can set up a barrier with two slits in it in a pool of water and then dip your finger in and out to generate waves. The ripples will pass through the two slits, and interfere with on the other side, making a pattern.

But if you take the barrier out of the water and fire a bunch of marbles at the two slits, they fly straight through in two direct lines, without making an interference pattern.

The weird thing is, electrons can behave like both.

If you fire electrons at the slits, even one at a time, they form an interference pattern on the screen – as if each electron passes through both slits at the same time, and interferes with itself. This seems to tell us electrons are waves.

Now, the “observation” is when the electron hits the detector, showing a bright flash (wave-function collapse).

But say you try to trick the electron by putting a mechanism at the slits which tells you which one the electron goes through. Suddenly the interference pattern disappears.

Because you know which slit the electron went through, it is no longer in a superposition of states, and so only travels through one of the slits. The electron’s wave-like behavior evaporates, and it behaves just like a marble.

If your head is hurting, be consoled that physicists also struggle to explain this apparent paradox (see “interpretations” below).

Though as Feynman noted in his Lectures on Physics, “the paradox” is only a conflict between reality and your feeling of what reality “ought to be”.

The Shut up and calculate school – physicists only interested in the answers, and who refuse to speculate about what is really going on.

The Many worlds interpretation – those physicists who maintain that every quantum measurement sparks the creation of an infinite number of parallel universes, one for each possible solution to the wave-function. The solution… it just happens to be the one that appears in our Universe.

The Copenhagen interpretation – reality does not exist until we measure it. The act of observing causes the wave-function to “collapse”.

The De Broglie-Bohm or pilot-wave interpretation – treats quantum objects just like classical particles, but imagines them riding like a surfer on top of a so-called pilot wave. The wave determines where the particle ends up.