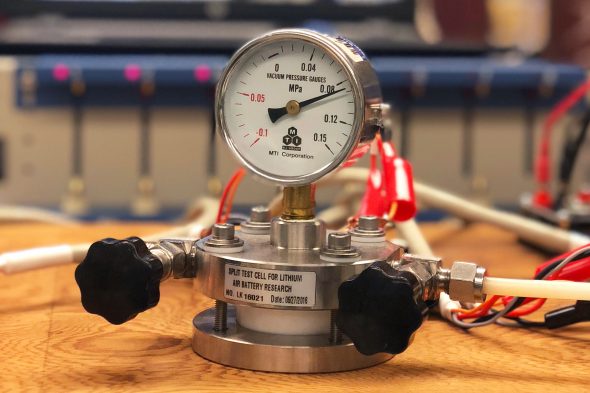 Researchers have designed a new lithium-based battery that could hold up to five times more energy than current lithium-ion models.

The design, reported in the journal Nature, saves weight by reacting lithium with oxygen drawn from the air instead of ions encased in the battery, and so could lead to phones and laptops that need charging less often, as well as electric vehicles with greater ranges.

Lithium is an attractive material for batteries because it is very light. Its density is a little over half that of water. Since the seventies, scientists have known that pairing it with oxygen would create super-light power-packs.

However, both lithium metal and oxygen are very reactive, so the design has proved difficult to perfect. Additional, unwanted, chemical reactions happen, creating by-products that build up on the electrodes and cause them to degrade after only a few charging cycles.

The team, led by Amin Salehi-Khojin from University of Illinois and Larry Curtiss from Argonne National Laboratory, both in the US, came up with a number of design tweaks to limit reactions and enable their prototype to run successfully for 700 charging cycles.

“One of the large challenges for this new type of battery has been to get it to run for many cycles as is needed for electric vehicles,” Curtiss says.{%recommended 4187%}

Their design included a thin coating of lithium carbonate and amorphous carbon on the anode, with a structure that allowed the diminutive lithium ions to pass through while blocking larger, problematic molecules such as oxygen and carbon dioxide.

They also developed a new electrolyte – the liquid between the electrodes through which the lithium ions travel – made of an ionic liquid, called 1-ethyl-3-methylimidazolium tetrafluoroborate, and dimethyl sulfoxide.

The trickiest part of the lithium-air batteries is the cathode – the negatively charged electrode through which electrons enter the device, drawn from oxygen from the air.

To connect the electrolyte in the battery innards to the outside air the researchers used a spongy lattice, coated with molybdenum disulfate flakes, engineered to have molybdenum atoms on their edges.

The metallic edges and the ionic liquid in the electrolyte combined acted as a catalyst that promoted the desired outcome – lithium reacting with oxygen to form lithium peroxide. The catalyst also minimised other reactions, including the formation of lithium oxide, an irreversible process, or those associated with contact with other components of air such as carbon dioxide, nitrogen or water.

“The complete architectural overhaul we performed on this battery by redesigning every part of it, helped us enable the reactions we wanted to occur and prevent or block those that would ultimately cause the battery to go dead,” says Salehi-Khojin.