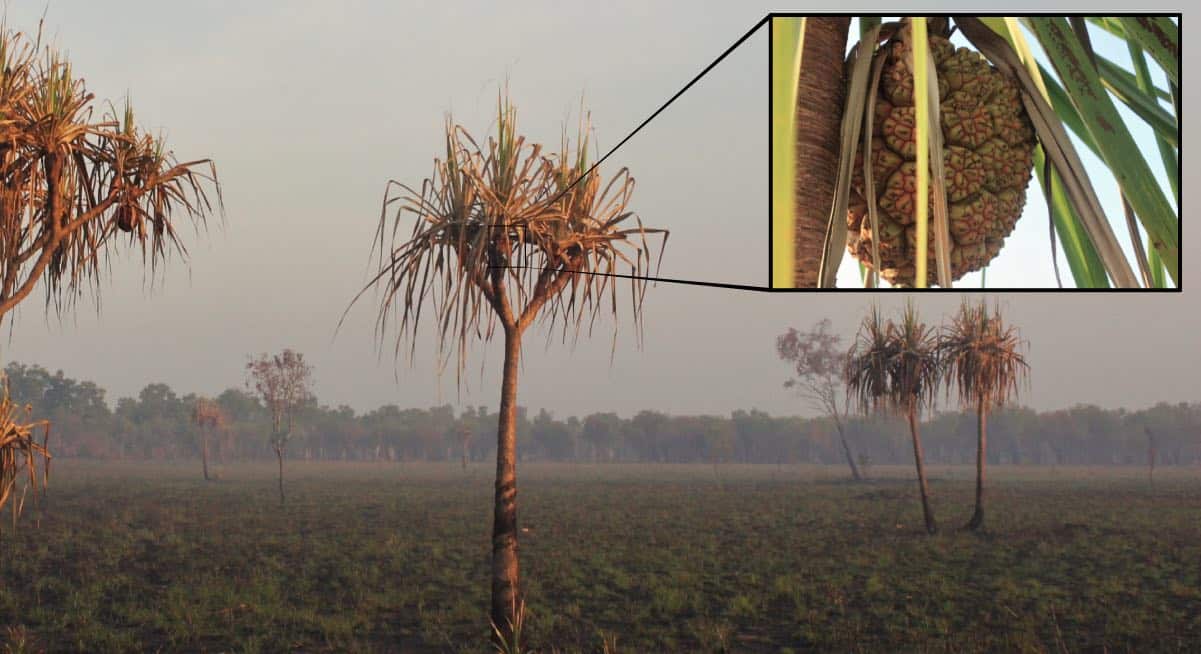 P. spiralis trees on the Magela Creek floodplain near Madjedbebe, with an inset displaying the cephalium. Credit Florin et al.
More on:
anthropology

Across the world, it’s what humans and other organisms have left behind that’s advanced our understanding of the Earth’s past. From pyramids to garbage piles, such leavings also preserve the opportunity to understand human history at the time these things were made or discarded.

When it comes to continuous Earth history, it doesn’t get much better than a 65,000-year-old rainfall record. That’s what archaeologists are generating from the ancient food scraps found at Australia’s earliest-known site of human occupation, in the Northern Territory.

The bonus? The area’s Traditional Owners, the Mirarr people, live on Country and worked alongside the research team. Mirrar Country is in western Arnhem Land, substantially within Kakadu National Park. The region’s dominant language is Kundjeyhmi but Mirarr people speak up to three Aboriginal languages, as well as English.

University of Queensland (UQ) researcher Anna Florin said the work was giving a glimpse into the Kakadu region’s environment from the time when people first entered the continent from the north.

“Using the scraps from meals eaten tens of thousands of years ago, we can tell a localised story of climate change and explore its effects on communities living in the Kakadu region through time,” says Florin, who also works with the University of Wollongong-based ARC Centre of Excellence for Australian Biodiversity and Heritage.

Using the nutshell of anyakngarra – also known as pandanus – Florin’s research team and Mirarr Traditional Owners worked together to develop a new method to investigate past rainfall at the site called Madjedbebe, a rock shelter in Arnhem Land’s Alligator Rivers region.

“The nutshells hold evidence in their composition for the amount of water available to them when they were growing and can be used to understand past rainfall,” says Florin.

“We’re now able to read the changing rainfall record through time and match this to the amazing strategies that were developed by Aboriginal people to cope with a dramatically changing landscape,” Clarkson says.

The nutshells – discovered during excavations at Madjedbebe in 2012 – are the leftovers of meals eaten up to 65,000 years ago.

Coupled with other archaeological evidence from the site, the research showed the region was likely a good place to be even during glacial periods, says Florin. “It allowed people to thrive during the driest spells in Australia’s history.

“This included during the Last Glacial Maximum – a period of global aridity occurring between about 25,000 and 18,000 years ago – in which Australia’s arid zone dramatically expanded.

“We can now see the region would have allowed early Australians to thrive during long dry spells, perhaps also attracting communities from surrounding areas.”

Another significant finding of the study was that the driest time in this long record of human use of the site was not during the Last Glacial Maximum, she said, but today.

“The region’s plants and animals are experiencing extreme hardships,” Florin says “Feral animals, loss of biodiversity and disruptions to cultural landscape management, including vegetation burning, all pose increased threats to the health and wellbeing of the landscape and its Traditional Owners.”

“This research reaffirms the importance of its long-term protection,” says O’Brien.

The research is published today in Nature Ecology and Evolution.

Originally published by Cosmos as Rainfall in a nutshell