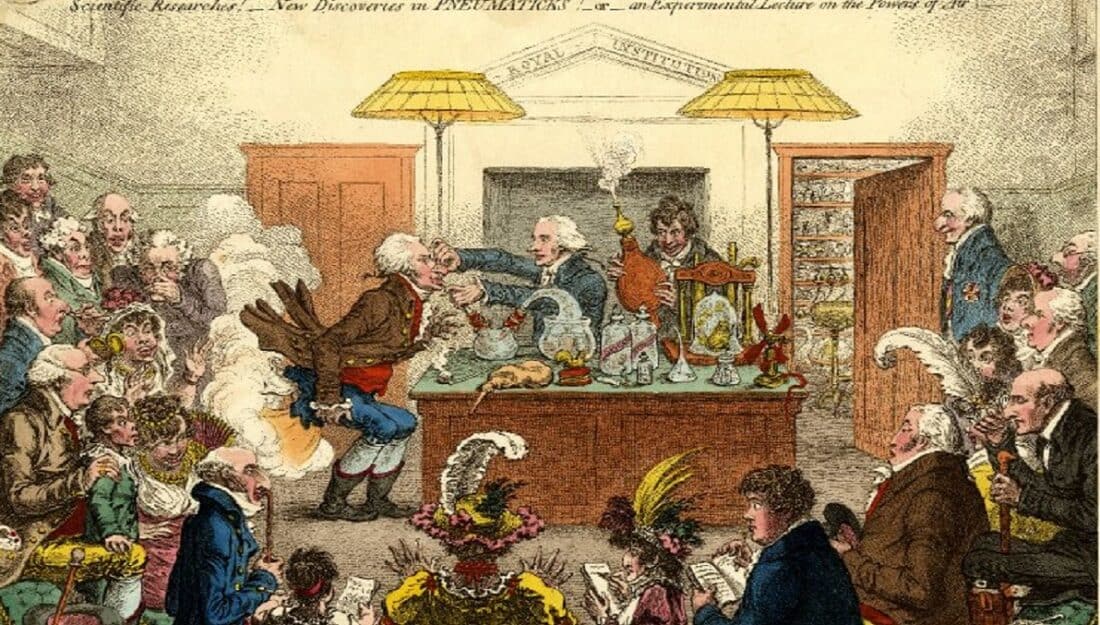 On any number of criteria there is poetic beauty to be found in science.

Indeed, there is even actual poetry, as seen in this work, “On breathing the Nitrous Oxide”, written in about 1799 by renowned British chemist and inventor Humphry Davy.

On breathing the Nitrous Oxide

Not in the ideal dreams of wild desire

Have I beheld a rapture wakening form

My bosom burns with no unhallowed fire

Yet is my cheek with rosy blushes warm

Yet are my eyes with sparkling lustre filled

Yet is my murmuring mouth replete with dying sound

Yet are my limbs with inward transports thrilld

And clad with new born mightiness around

Sam Illingworth, author of the 2019 book A Sonnet to Science: Scientists and Their Poetry, says Davy’s writing “was celebrated” by some of the leading poets of the time, including William Wordsworth and Samuel Taylor Coleridge.

Davy was also “the pre-eminent British chemist of the Romantic period” (roughly 1798 to 1837), says Wahida Amin, in a 2013 PhD submission titled “The Poetry and Science of Humphry Davy”, written for the University of Salford, in Manchester.

Amin says that in his poetry, Davy combined ideas from literature, medicine and chemistry, and as a result influenced the arts as well as science.

As a scientist, he was a pioneer in the use of electricity – electrolysis – “to isolate a series of substances for the first time; potassium and sodium in 1807 and calcium, strontium, barium and magnesium the following year”, says an article published by the BBC. He also demonstrated the existence of chlorine.

“He studied the forces involved in these separations, inventing the new field of electrochemistry,” the BBC says.

He also invented what is known as the Davy lamp, a device that saved the lives of innumerable coal miners in Britain and Europe.

Davy the poet stood apart from his scientist peers in other ways too. As author David Knight says in his 1992 biography, Humphry Davy: Science and Power, he “had risen from obscurity to the presidency of the Royal Society”.

In 1812 he was named a baronet, but in the “very class-conscious society” of Regency England, Knight says, he was “one of the most respected and most disliked men of science ever”.

Davy was born in Penzance, Cornwall, on 17 December 1778, the eldest of the five children, the son of a woodcarver. He attended local grammar schools but considered himself to be self-taught.

According to the Royal Institution, in 1795 Davy was apprenticed to a surgeon in Penzance, “where he was introduced to the rudiments of science”.

In 1798 he joined the Pneumatic Institution in Bristol, founded by physician and scientist Thomas Beddoes and “one of the first organisations formed to exploit the newly discovered respiratory gases in medical practice”, says a 2014 paper by John West, from the University of California, San Diego, published by the American Journal of Physiology.

“The previous 40 years had seen essentially all of the important respiratory gases described, and the institution was formed to exploit their possible value in medical treatment,” West says.

“Davy himself is well known for producing nitrous oxide [often called laughing gas] and demonstrating that its inhalation could cause euphoria and heightened imagination,” he says.

Davy was “the first to show that it was possible to liquefy gases by submitting them to a pressure of 36 atm at 0°C”, says a 2014 article in the European Journal of Anaesthesiology

Beginning in 1801 Davy began a series of scientific demonstrations and lectures that proved to be extremely popular. He “was a brilliant lecturer and developed an enthusiastic following”, West says.

“In an intense period of work from mid-October to December 1815, Davy made various prototypes.” The final design was “a basic lamp with a wire gauze chimney enclosing the flame. The holes let light pass through, but the metal of the gauze absorbs the heat”.

The lamp was successfully tested in January 1816 and quickly went into production. Davy refused to take out a patent on his invention.

He died in Geneva, Switzerland, on 29 May 1829 and is buried in the cemetery of Plainpalais; there is a tablet in his memory at Westminster Abbey.