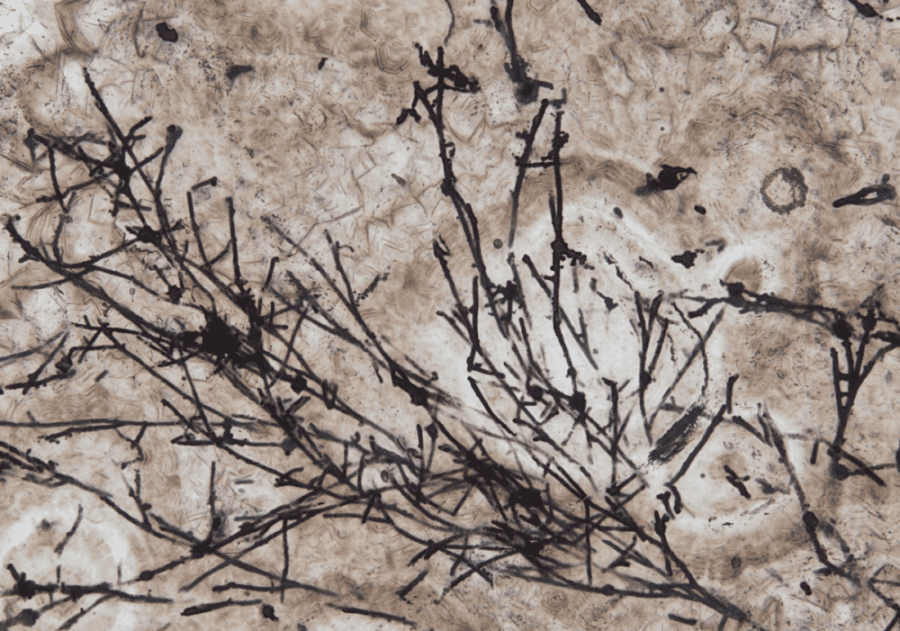 A US-China collaboration has uncovered the oldest terrestrial fossil ever found: that of a tiny, fungi-like organism that may have shaped the world.

Earth was emerging from one of its largest-ever ice ages about 635 million years ago (mya); the global average temperature had plummeted to -50°C and the oceans were frozen to depths of a kilometre. As the climate abruptly warmed again, the very first animal life began to evolve.

Scientists have long wondered how the Earth’s biosphere returned to “normalcy” after being locked in ice. Now, this discovery suggests that microscopic, cave-dwelling fungi may have played a key role.

“It was an accidental discovery,” says co-author Tian Gan, from the Virginia Tech College of Science, US. “At that moment, we realised that this could be the fossil that scientists have been looking for a long time. If our interpretation is correct, it will be helpful for understanding the paleoclimate change and early life evolution.”

Fungi have a formidable digestive system, which can chemically break down rocks and other tough organic matter and cycle the nutrients through the ecosystem. Vast fungal webs also extend through the soil, creating underground highways that transfer food, water and chemical signals between plants.

“Fungi have a mutualistic relationship with the roots of plants, which helps them mobilise minerals, such as phosphorus,” Gan explains. “Because of their connection to terrestrial plants and important nutritional cycles, terrestrial fungi have a driving influence on biochemical weathering, the global biogeochemical cycle, and ecological interactions.”

Fungi has been evolving since it diverged from other life around 1.5 billion years ago, but since it’s easily degradable and doesn’t biomineralise (produce mineral structures, such as a skeleton), the fungal fossil record is sparse. This makes it hard for scientists to pin down when fungi colonised land and became a key player in the planet’s systems.

Fossils with “fungal affinity” have been previously uncovered in the Canadian Arctic, dating back to around one billion years ago, and fungi-like fossils have also recently been discovered in the Democratic Republic of Congo, dating back to 810–715 mya. But the oldest unambiguous, uncontroversial fungi in the terrestrial fossil record appears only around 400 mya.

If these newly discovered fossilised filaments are indeed fungi, then it will shift the timeline of when fungi and plants first formed a symbiotic relationship, pushing it back to at least 635 mya.

“The question used to be: ‘Were there fungi in the terrestrial realm before the rise of terrestrial plants?’,” says Shuhai Xiao, co-author and geoscientist also from Virginia Tech. “And I think our study suggests yes.”

The fossilised filaments were also found alongside other fossils, so the researchers’ next step will be to untangle these other associated species.

“It is always important to understand the organisms in the environmental context,” says Xiao.

“We have a general idea that [the fungi] lived in small cavities in dolostone rocks. But little is known about how exactly they lived and how they were preserved.

“Why can something like fungi, which have no bones or shells, be preserved in the fossil record?”

The jury is still out – further study is needed to figure out these filaments. But if the researchers are right in their interpretation, then these early fungi may have bailed us out of an ice age and helped create conditions for life as we know it.