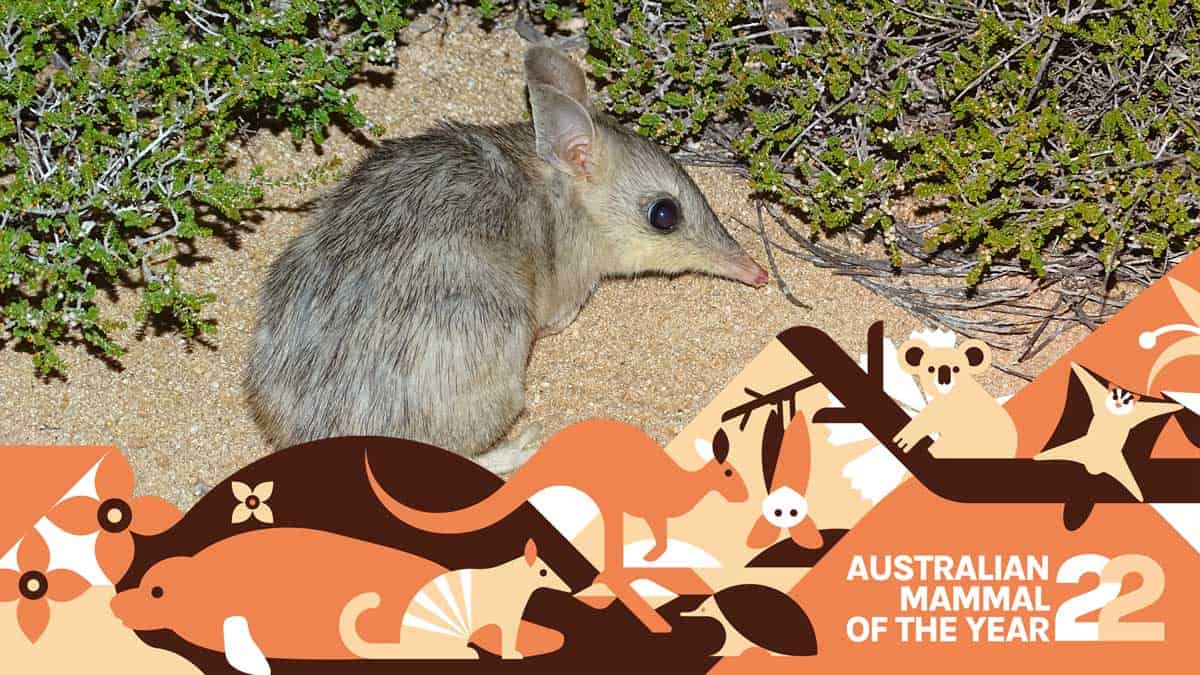 Habitat/range: Coastal scrub, low heath and hummock grassland. Present in the wild at Bernier and Dorre Islands in Western Australia. It was extinct on the mainland, but has been introduced to sanctuaries in South Australia, New South Wales and Western Australia.

Superpower: Super gardener. Bandicoots in general dig so much that they help with seed growth, spread fungal spores, and aerate soils for better water filtration.

Vote for the Shark Bay Bandicoot!

Bandicoots have had a tough time in the past 200 years, with many bandicoot species listed as endangered or extinct. The Shark Bay Bandicoot – Australia’s smallest bandicoot – went completely extinct on the mainland, and now survives only on two Shark Bay islands with a combined total area of approximately 90 square kilometres. They’re the perfect snack-pack size for a cat or fox on the move, plus they’ve been severely affected by land clearing and changes to fire regimes.

Shark Bay bandicoots are marsupials related to bilbies. Females have a backward-facing pouch and they often have two joeys at a time. Males are the same size as females – unusual in any type of mammal.

These bandicoots are adorably cute, with a pointed face, pink nose, dark eyes, pointed ears, and lush cream-coloured coat with a distinct darker saddleback. Their large front claws are excellent for digging, and they dig a lot. They can move tonnes of soil each year, which encourages plant and fungal growth – they are known as “ecosystem engineers” because they’re so important for the environment.

Shark Bay bandicoots used to be called ‘Western barred bandicoots’ and were thought to have a large distribution on the mainland, until it was shown in 2018 that several species occurred within that distribution. ‘Barred’ bandicoots only occurred from the Nullarbor plain to New South Wales, so this species was renamed after its island retreat.

Many related bandicoot species are extinct on the mainland, so the Shark Bay bandicoot is a prime candidate to be introduced in arid zone sanctuaries across Australia, where they would play a role in reviving the landscape. It’s sad to think that we’ve lost five closely-related bandicoot species on the mainland. All would have provided an ecological role to help keep the environment healthy.

It’s a huge task to keep the Shark Bay bandicoot from extinction, but we want to help boost its numbers to return to mainland Australia, and provide the essential ecological services once provided by their extinct relatives. The Shark Bay bandicoot needs our support and love, so vote for this mini marvel! Dr Kenny Travouillon is the curator of Mammalogy at the Western Australian Museum, and has been studying fossil and modern mammals, mainly marsupials, for the past 18 years.