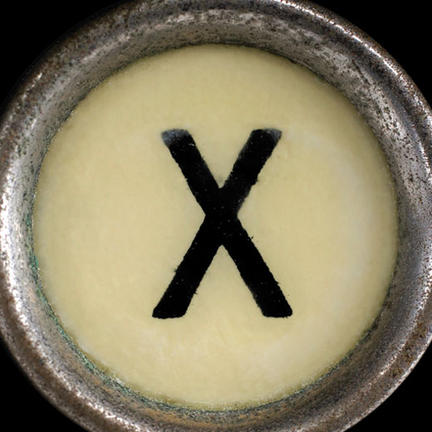 The letter X stands for the unknown or the mysterious: Project X; the X-Men; the X-Files. When physicist Wilhelm Röntgen discovered a baffling new form of radiation in 1895, naturally he named them “X-Rays”. We absorbed these cultural connotations long before we encountered X in maths class, where we learned to solve algebraic equations for X. But why not some other letter? Why does X always stand for the unknown?

First, if you have an eye for natural symbolism, you might notice that the shape of the letter X makes a beautiful picture of seeking and finding. Two lines go on forever, but intersect at only one point: the centre of the X. Or you can think of an X as two arrowheads pointing to a single spot, either from the north and the south, or from the east and the west. X marks the spot, the end of the journey, the place where the treasure is hidden.

But X has a historical backstory as well. My personal journey towards the demystification of the enigmatic X begins seven years ago, when I decided to learn Arabic. I discovered that Arabic is a supremely logical language. Writing a word or a phrase or a sentence in Arabic is like crafting an equation, because every part is precise and carries a lot of information.

Much of what we think of as modern science, mathematics, and engineering was really worked out about 2,000 years ago by the Persians, the Turks, and the Arabs. This includes the little system called al-jabr, which translates as “the reconciliation of disparate parts”. The Arabic term al-jabr passed into English as “algebra”.

One of the founding fathers of modern mathematics was Muhammad al-Khwarizmi, who lived in ninth-century Persia. In 832 he was invited to Baghdad to be the resident mathematician at the House of Knowledge. There, drawing on classical Greek, Indian, and Egyptian sources, he continued to develop much of the mathematics we know today. His influence was so great that for the next several hundred years symbolic mathematics was known in Europe as “al-Khwarizmi” mathematics. But because the initial sound of his Persian name, “kh”, didn’t easily roll off European tongues, it was usually rendered as a “g”, making the term “al-Gwarizmi”. His name survives today in our word “algorithm”.

The term algorithm isn’t the only product of the European tongue’s attempt to grapple with Middle-Eastern sounds. Arabic texts containing mathematical wisdom finally arrived in southern Europe, via Spain, in the 11th and 12th centuries. At this point in history, there was great interest in translating these texts into a European language. But that wasn’t so easy to do.

One culprit is the Arabic letter sheen, which makes the sound sh. Sheen is the first letter of the Arabic word shay-un, which means “something” – an undetermined thing. In Arabic, we can make that into a specific something by adding the indefinite article, al. So this al-shay-un, this “specific something”, appears throughout mathematics texts to represent the part of the equation that is not yet identified, and for which the equation is to be solved.

Here is one example, in a text that describes the process for deriving roots. You can see that the word al-shay-un appears four times in the first two lines.

The problem for the Spanish scholars who were charged with translating these texts is that the letter sheen, and thus the word shay-un, can’t be transliterated into Spanish, because Spanish has no sh sound. So Spanish scholars used the closest sound they could find instead: the “ch” sound from classical Greek, which is represented by the letter Χ (chi). Later, when these texts were translated into the common European language of the day, Latin, the translators simply replaced the Greek Χ with the Latin X, which looks very similar. Once these works were in Latin, they served as the standard mathematical texts for the next 600 years.

And here we arrive at the end of the treasure hunt, with the answer to our question, why is X the unknown? X is the unknown because you can’t say sh in Spanish.

Terry Moore directs the Radius Foundation in New York, which explores the intersection of disparate fields such as religion, science, aesthetics and social action.