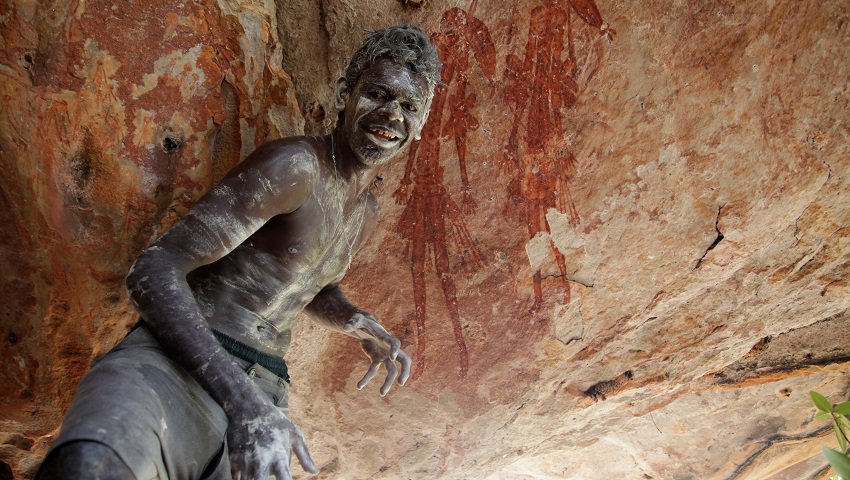 Ado French, from one of the families of local Traditional Owners, in front of a pair of Gwion rock art figures. Credit: Mark Jones

Scientists believe well-known pre-historic rock paintings in Western Australia are younger than previously thought after dating the remnants of mud wasp nests found over and beneath them.

The study, which is described in a paper in the journal Science Advances, is one of few in recent decades, they say, to successfully use the novel and challenging approach.

The Gwion paintings of the Kimberley region have been notoriously hard to date, but evidence has suggested they were painted as far back as 17,000 years ago and over the span of several thousand years, pointing to a remarkably long-lived artistic tradition.

Now a team led by Damien Finch from the University of Melbourne, with input from the Australian Nuclear Science and Technology Organisation, has presented its findings suggesting they were more likely painted during a narrow timeframe, about 12,400 years ago.

To do this, they used radiocarbon dating, which can determine how long ago living material died.

Working with the traditional owners of the Aboriginal sites, they analysed the nests of wasps that build mud nests on rock walls, sometimes incorporating charcoal from regular local brushfires.

Two samples fall outside of that range. One, which was found under a painting but dated at only 6,900 years old, is thought to be unreliable and possibly contaminated.

However, the second was found over a painting and more reliably estimated to be 16,600 years old, complicating the findings. Finch and colleagues suggest more nest samples need to be identified and dated to get a clearer picture.

Nevertheless, the results “confirm that rock art was being produced in the Kimberley during the terminal Pleistocene”, they write in their paper.

“Notably, as the Gwion paintings are not the oldest in the relative stylistic sequence for this area, earlier styles must have an even greater antiquity.”

Originally referred to as Bradshaw paintings, the Gwions are feature finely painted human figures in elaborate ceremonial dress, including long headdresses, and accompanied by material culture including boomerangs and spears.