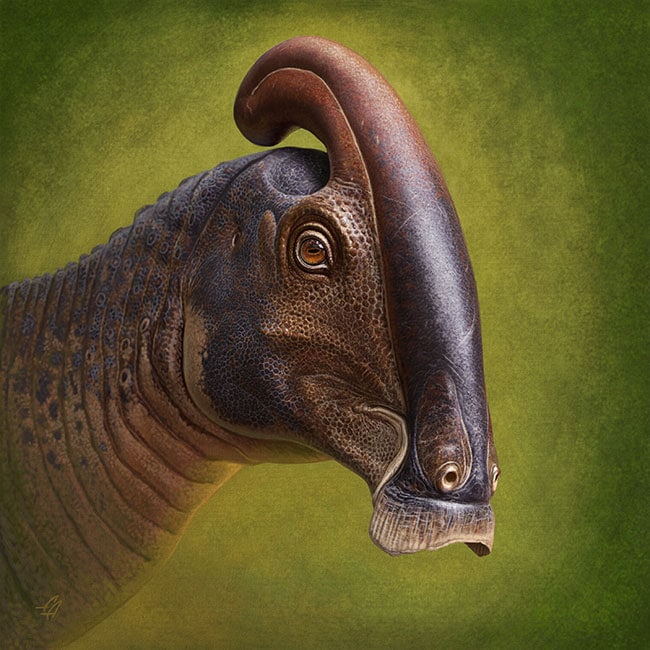 Life reconstruction of the head of Parasaurolophus cyrtocristatus based on newly discovered remains. Credit: Andrey Atuchin
More on:
paleontology

In the arid badlands of New Mexico, paleontologists have uncovered the first new skull of the rare dinosaur Parasaurolophus in nearly a century.

Familiar to every dinosaur-obsessed kid, Parasaurolophus sports a bizarre and elaborate crest growing from its skull, forming a hollow tube at its largest point.

“Imagine your nose growing up your face, three feet behind your head, then turning around to attach above your eyes,” explains Terry Gates, paleontologist from North Carolina State University in the US and lead author of the new paper, published in the journal PeerJ.

“Parasaurolophus breathed through eight feet of pipe before oxygen ever reached its head.”

Three species of Parasaurolophus are currently recognised, with specimens found in New Mexico, Utah, and Alberta in Canada. They all date back to the Late Cretaceous Period, around 75 million years ago.

The new, exquisitely preserved skull is from Parasaurolophus cyrtocristatus, a species known from a single specimen found in the same area of New Mexico 97 years ago, in 1923.

This skull was discovered in 2017 on the lands of the Diné (Navajo Nation) and Puebloan peoples. Initially, only a small sliver of the skull was visible on a steep sandstone slope, so the team were surprised to then chisel out a partial skull, including an intact crest with remarkable detail – providing answers about its structure after decades of paleontological disagreement.

“Over the past 100 years, ideas for the purpose of the exaggerated tube crest have ranged from snorkels to super sniffers,” notes co-author David Evans from the Royal Ontario Museum in Canada. “But after decades of study, we now think these crests functioned primarily as sound resonators and visual displays used to communicate within their own species.”

The characteristics of this new skull also suggest that the two southern species of Parasaurolophus – with specimens found in New Mexico and Utah – are more closely related to each other than to their northern cousin in Alberta.

According to Joe Sertich, curator of dinosaurs at the Denver Museum of Nature & Science and leader of the dig team, the skull shows that this crest is formed much like the crests of other related duckbill dinosaurs.

“This specimen is a wonderful example of amazing creatures evolving from a single ancestor,” he says.

While the badlands of New Mexico are today a dry, sparsely vegetated place, 75 million years ago they would have been a lush subtropical floodplain. At this time, North America was divided by a shallow sea into two landmasses. Mountain-building episodes on the western side helped preserve the diverse ecosystems of dinosaurs in some of the best-preserved and most continuous fossils on the planet. They show that Parasaurolophus shared the continent with many species of dinosaurs sporting duckbills or horns, as well as early tyrannosaurs, alligators and turtles.

The fossil was found on Bureau of Land Management Wilderness lands, which, says Sertich, “reinforces the importance of protecting our public lands for scientific discoveries”.