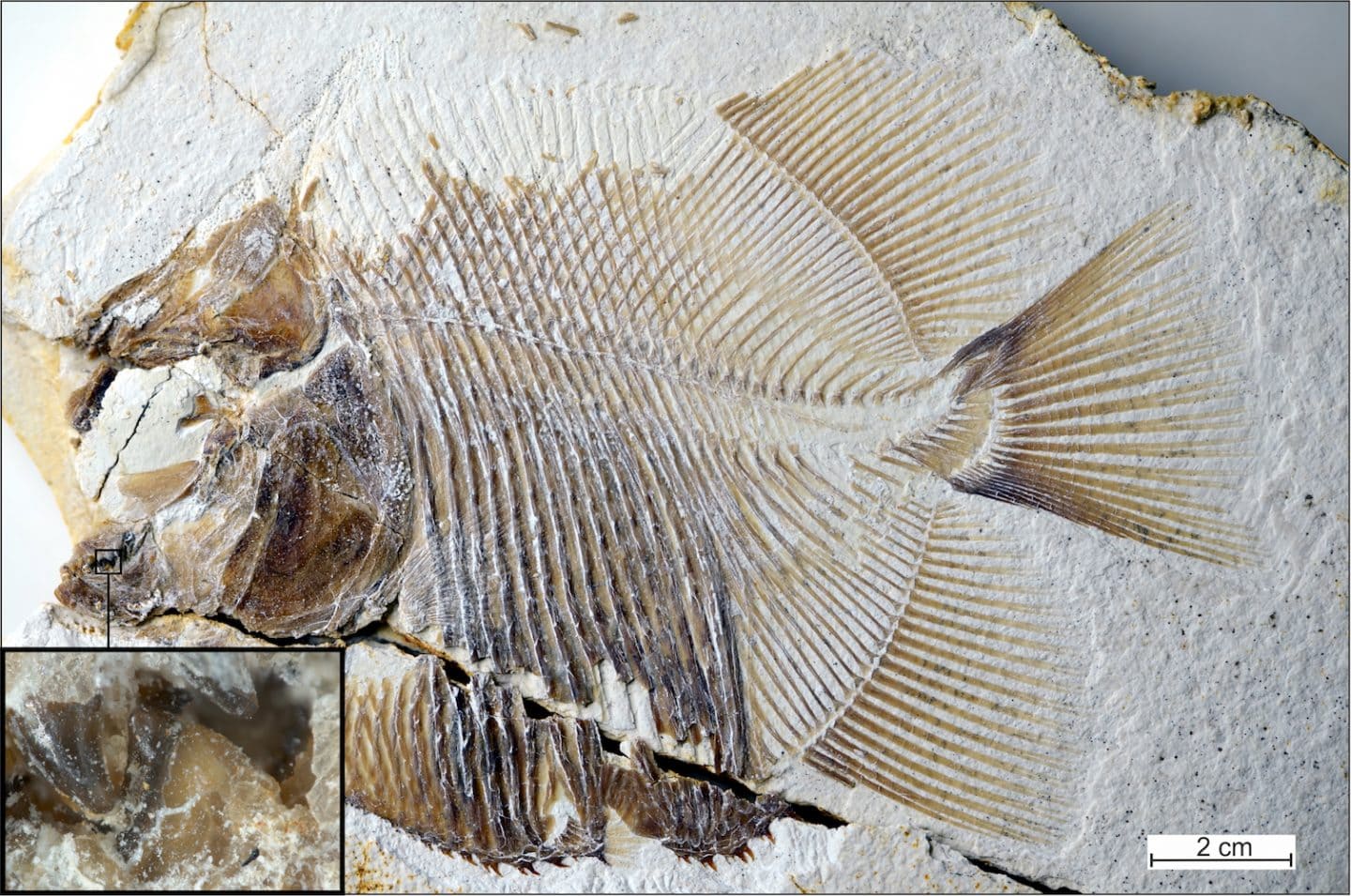 Palaeontologists have uncovered the world’s oldest known flesh-eating fish – along with a few of its likely victims – in a limestone quarry in Germany’s Solnhofen region.

The fish, dubbed Piranhamesodon pinnatomus, has teeth remarkably like those found in modern-day piranhas. It lived about 150 million years ago, in the late Jurassic period.

The date of the specimen was a surprise, because it was thought that for much of their evolution, bony fishes – as distinct from cartilaginous species, such as sharks and rays – were not equipped for flesh-biting. For millions of years, the palaeontological orthodoxy held, bony fishes either fed on soft targets or swallowed prey whole. Piranhas and their toothy ilk mark a comparatively late adaptation.

“We were stunned that this fish had piranha-like teeth,” says Martina Kölbl-Ebert of the Jura-Museum Eichstätt in Germany, co-author of a paper in the journal Current Biology.

“It comes from a group of fishes – called the pycnodontids – that are famous for their crushing teeth. It is like finding a sheep with a snarl like a wolf. But what was even more remarkable is that it was from the Jurassic.”

Confirmation that the jaw and dental formation evident in the fossil were proof of flesh-eating behaviour was not, as it turned out, difficult to find. The same limestone deposit contained fossils of other fish species, many with chunks of fin missing.

The researchers assume the damage is consistent with the fish having been attacked by P. pinnatomus – thus providing another remarkable parallel with modern piranhas.

Contrary to much myth, the present-day predators prefer to attack fish fins rather than target their bodies. It is, says co-author David Bellwood of James Cook University, Australia, a clever tactic.

“It’s a remarkably smart move as fins regrow, a neat renewable resource,” he explains. “Feed on a fish and it is dead; nibble its fins and you have food for the future.”

Bellwood adds that it would be inaccurate to regard the Jurassic predator as a kind of early version of a piranha. There are similarities in dentition and apparent feeding strategies between the two very distantly related species, but there are also big differences – environment being perhaps the main one.

“The new finding represents the earliest record of a bony fish that bit bits off other fishes, and what’s more it was doing it in the sea,” Bellwood says, noting that today’s piranhas all live in freshwater.

“So, when dinosaurs were walking the earth and small dinosaurs were trying to fly with the pterosaurs, fish were swimming around their feet tearing the fins or flesh off each other.”