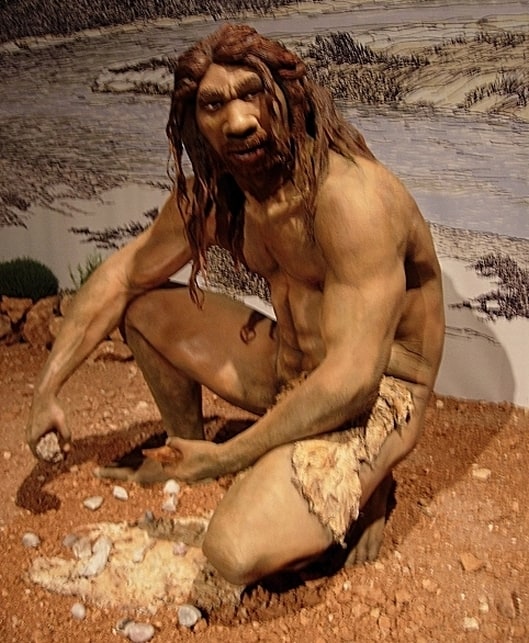 A reconstruction of Homo heidelbergensis, who may be a direct descendant of both Homo neanderthelensis and Homo sapiens. Credit: WIKIPEDIA COMMONS
More on:
neanderthal

Two independent teams of researchers investigating why East Asian people have more Neanderthal DNA than Europeans have reached the same conclusion. They say the ancestors of Asians interbred with Neanderthals for a second time, and at a later date, giving them an extra dose of Neanderthal DNA.

In 2010 scientists discovered that the ancestors of Europeans and Asians interbred with Neanderthals about 50,000 years ago. Neanderthal bone sites have been found across  Europe and Western Asia – some dating back about 200,000 years, while others are as recent as 40,000 years old. It is believed Homo sapiens remained in Africa until about 60,000 years ago and then spread across Europe and Asia. During this migration they met – and bred with – Neanderthals.

About 2 per cent of the genome of a typical European contains genetic material almost identical to Neanderthal DNA. But people in China, Japan and other East Asian countries carry 20% more Neanderthal DNA.

Joshua M. Akey, a University of Washington geneticist and graduate student Benjamin Vernot have proposed that the reason for the anomaly is that Asians inherited extra Neanderthal DNA at a later date. Their hypothesis is that the ancestors of Asians and Europeans parted, with the early Asians travelling East where they had a second encounter with Neanderthals.

In the meantime, Kirk Lohmueller, a University of California geneticist, and graduate student Bernard Kim, approached the question from a different direction. They constructed a computer model of Europeans and Asians adding Neanderthal DNA to the mix and watching the genetic differences emerge. In their modelling, the only scenario that explained why modern Asians have more Neanderthal DNA was they had a second encounter with Neanderthals at a later date.

Both sets of findings have been reported in the American Journal of Human Genetics.

It has been believed that Neanderthals became extinct about 40,000 years ago. But if the new theories are correct, Neanderthals lived for a longer time in Asia. Fossil evidence yet to be discovered may resolve the question. “That’s a paradox the field needs to address,” Dr Lohmueller said.

See also in Cosmos: The Neanderthals Live On In Us