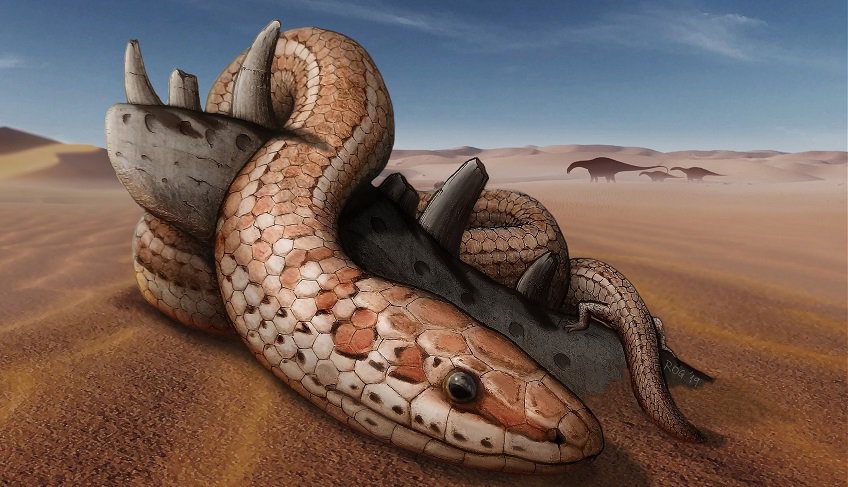 Life restoration of Najash rionegrina in the landscape of the Kokorkom desert, which extended across Río Negro, in Patagonia, during the Late Cretaceous. Credit: Raúl Orencio Gómez

Snakes had legs for quite a while, but it was quite a while ago, according to analysis of a rare fossil find.

Palaeontologists from Argentina, Canada, Australia and the US say their analysis of three-dimensionally preserved skulls of the Cretaceous legged snake Najash indicates that snakes possessed hindlimbs for about 70 million years before evolving their modern look.

This suggests, they write in a paper in the journal Science Advances, that snakes with hindlimbs were successful and stable over time rather than simply undergoing a transient phase.

However, the lack of evidence for forelimbs in Najash and other early snakes suggests these likely disappeared from the snake body plan at a much earlier point in its evolution.

The “strikingly well-preserved” fossils, which were found in the Río Negro province of Argentina’s northern Patagonia region, had other stories to tell as well.

Skull analysis revealed that Najash lacked a full crista circumfenestralis, the series of bony crests long considered a defining feature of “snakeness”, but still had a cheekbone – also known as a jugal bone – which has all but disappeared in their modern descendants.

“Our findings support the idea that the ancestors of modern snakes were big-bodied and big-mouthed, instead of small burrowing forms as previously thought,” says lead author Fernando Garberoglio, from the Fundación Azara at Universidad Maimónides, Argentina.

They also revolutionise our understanding of the jugal bone in snake and non-snake lizards, adds co-author Michael Caldwell, from Canada’s University of Alberta.

“After 160 years of getting it wrong, this paper corrects this very important feature based not on guesswork, but on empirical evidence.”

Understanding snake evolution has been hampered by a limited fossil record, so the discovery of eight Najash skulls – one almost perfectly intact – and other fossilised remains was something to celebrate.

Garberoglio and colleagues used micro-computed tomography scanning to visualise the skull structures, examining the pathways of nerves and blood vessels, as well as the skeletal structure that would be otherwise impossible to see without damaging the fossil.

Najash, they say, was closely related to an ancient lineage of snakes that populated the southern hemisphere continents of Gondwana, but appears to be related to only a small number of obscure, modern snakes.

“Najash is now the best-known early snake and substantially clarifies the homologies of several problematic but key elements of the modern snake skull as well as the evolution of the skull from much more ancient snakes and even earlier non-snake lizards,” the authors write.

“These new materials of Najash shed light on the affinities of Late Mesozoic snakes and the successive evolutionary changes that led to the origin of modern snakes and one of the most remarkable vertebrate body plans.”

Originally published by Cosmos as When snakes had legs