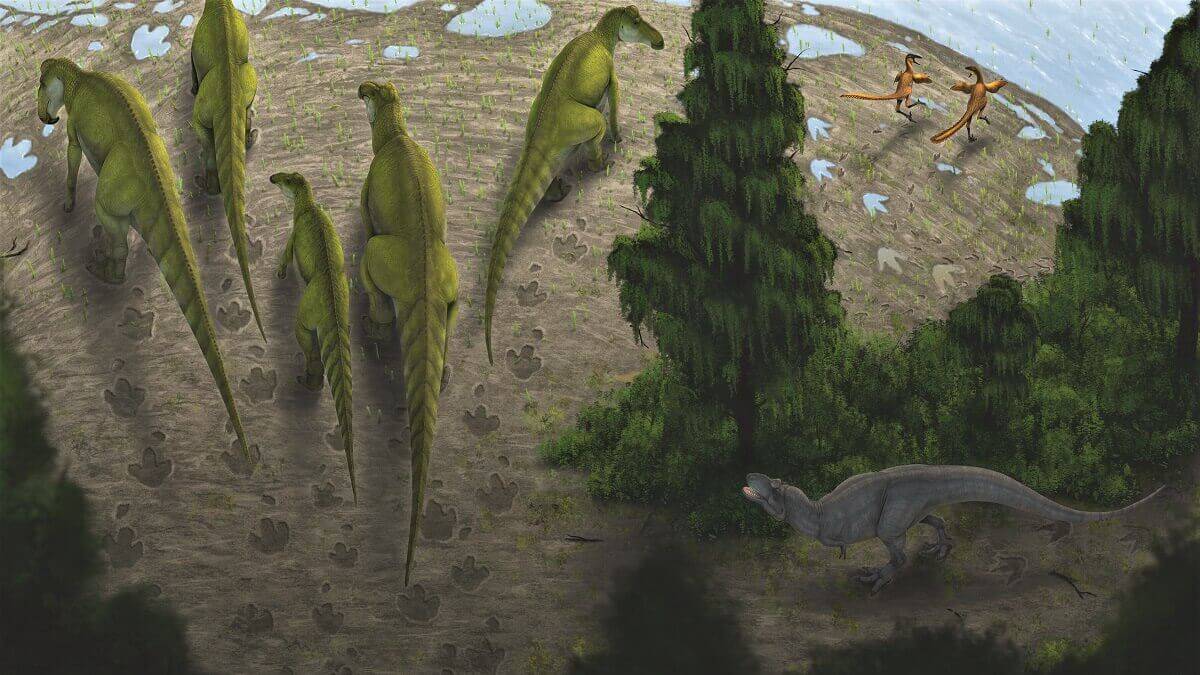 Artistic reconstruction of the Tyrants Aisle dinosaur tracksite, 72 million years ago, showing a small herd of hadrosaurs being stalked by a lone tyrannosaur. Credit: José Vitor Silva.
More on:
tyrannosaurs

An Australian-led team of palaeontologists has discovered more than 100 dinosaur footprints in Canada, revealed as a riverbank eroded away.

The fossil footprints show that this boreal-forest-covered area in northern Alberta was once home to greater predators than today’s bears and cougars. 72 million years ago, at least four types of dinosaurs patrolled the ancient floodplains – including tyrannosaurs, earning the stretch of riverbank the nickname ‘Tyrants Aisle’.

“The most abundant tracks at Tyrants Aisle are those of hadrosaurs, which were large herbivorous dinosaurs that sometimes exceeded 12 metres in length and four tonnes in mass,” says Nathan Enriquez, a PhD student from the University of New England (UNE) and lead author of the paper published in PLOS ONE.

“The biggest of their footprints that we found measured 65cm long, suggesting the animal was 2.6 metres tall at the hips. They may have acted a bit like cows, grazing on low-growing vegetation and forming herds.”

Two of the species identified were meat-eaters, including tyrannosaurs that stood 2m tall – relatives of raptors.

“The best-preserved tyrannosaur track at the site measures almost 50cm in length and, based on the age of these rocks, was possibly produced by Albertosaurus sarcophagus, an earlier relative of T. rex,” Enriquez says.

But the tracks are disappearing fast. They are located across three different layers of rock on the banks of the Redwillow River, near the city of Grande Prairie in Alberta. They likely follow the margins of an ancient river system, but they are still being influenced by the water today. The river submerges the fossil site for much of the year and the rock is steadily eroding away.

“By the time we found the site, much information had already been lost,” Enriquez says. “It was important that we carefully document this site while it is still available to us.”

To preserve the data from the site for future work, Enriquez and team have made 3D models of the most significant footprints and trackways.