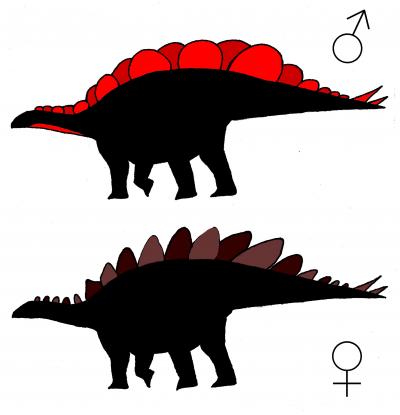 The discovery of a single anatomical difference between males and females in the species Stegosaurus mjosi provides some of the most conclusive evidence that some dinosaurs looked different based on sex, according to new Princeton University research. Scientists are not sure which shape belonged to which sex but have made assumptions. Credit: EVAN SAITTA

Researchers found that the back plates of the species Stegosaurus mjosi came in two varieties that indicated the animal’s sex – short and wide, or tall and narrow. Females had one type of plate and males had the other, but because there is no particular sex-specific bone tissue in birds and some dinosaurs we cannot tell exactly which sex had which plate type.

Nevertheless, author Evan Saitta believes that the tall, narrow plates belonged to females, who would have needed the pointier plates to defend themselves against predators. The wide plates, which were 45% larger in surface area, probably served as “billboard” displays males used to attract females, he says.

“To people who say that dinosaur ornamentation was not for sexual display, we can say that we now have an example. We can’t have that broad generalization anymore,” said Saitta.

“My results apply to S. mjosi and no other species, but I’m sure this Stegosaurus did not exhibit the only sexual dimorphism in non-avian dinosaurs,” he said. “This is really just the most convincing case, the most conclusive example.”

These differences – known as sexual dimorphism – might have existed in non-avian dinosaurs, which includes iconic reptiles such as Tyrannosaurus and Brontosaurus, Saitta said.

Existing work on sexual dimorphism in non-avian dinosaurs had been inconclusive to the point that some palaeontologists began to think that male and female dinosaurs did not differ physically from one another.

Originally published by Cosmos as Sex difference in the Stegosaurus