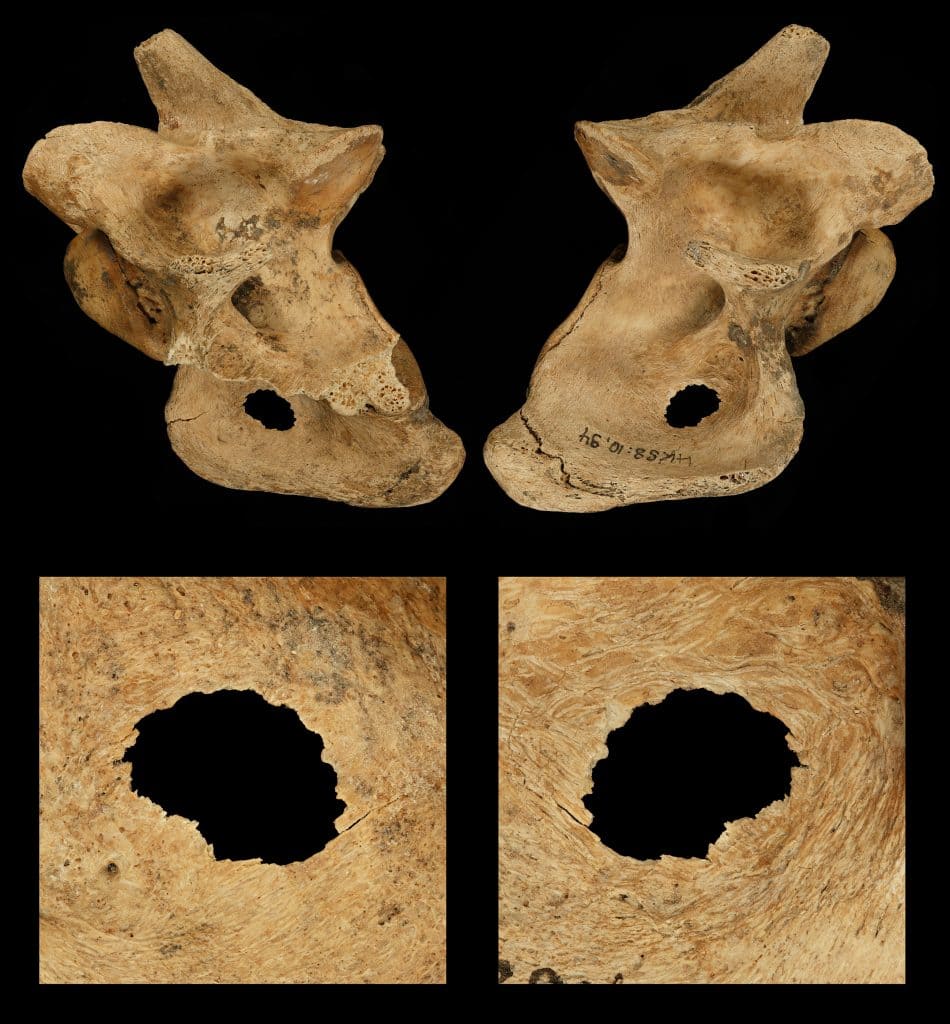 The findings, published in the journal Nature Ecology and Evolution, constitute the earliest unambiguous evidence of spear-hunting by hominins.

Humanity’s ancestors depended on animals as a key dietary resource for at least 2.5 million years, but it’s unclear when the acquisition of meat shifted from opportunistic scavenging to hunting.

The oldest known artefacts that were potentially used in hunting include a roughly 400,000 year old wooden spear-like object found in Clacton-on-Sea in England, as well as several wooden spears found in Schöningen, Germany, that are at least 300,000 years old.

Yet just how such weapons were used during the Middle Palaeolithic period – which spans 300,000 to 50,000 years ago – remains ambiguous. For example, a wooden spear may have been used to facilitate the aggressive theft of carcasses killed by other predators, rather than as an instrument of slaughter.

Wound marks, or “hunting lesions”, on animal remains can provide a valuable source of evidence for hunting behaviours. The marks are the remnants of healed and unhealed injuries, and can indicate the type of weapon that may have been used, the direction of impact was and how much force must have been applied.

Unfortunately, though, unambiguous hunting lesions are not easy to find. A few examples of potential marks have been uncovered at sites in England and South Africa, dating to between 500,000 and 100,000 years ago.

But it’s not until the Upper Palaeolithic – 50,000 to 10,000 years ago – that we find clear evidence of hunting, where stone spear tips are embedded in skeletal remains, such those found in a 50,000 year old wild donkey bone at Umm el Tlel, Syria, or in a 29,000 year old mammoth bone in the Siberian Arctic.

Now, a study led by researchers in Germany and the Netherlands reveals strong evidence for close-range spear hunting by Neanderthals some 120,000 years ago.

When a Middle Palaeolithic site in Germany called Neumark-Nord was excavated a few decades ago, archaeologists found abundant traces of Neanderthal presence, as well as numerous animal remains.

Using a high-resolution digital microscope, she and her colleagues analysed pelvis and vertebra punctures in the skeletons and concluded that the injuries were consistent with wounds caused by wooden spears, such as those found at the Clacton-on-Sea and Schöningen sites.

The researchers then performed a ballistics analysis by using a digitally monitored wooden thrusting spear to perforate bone samples from large red deer (Cervus elaphus), similar in size to the Pleistocene deer found at Neumark-Nord.

In doing so, Gaudziniski-Windheuser and her colleagues were able to produce wound marks very similar to those found in the original remains. This, together with analysis of the angle of impact and level of force required to inflict the injuries, suggests the deer had been killed by close-range spear thrusts.

The findings support the idea that Neanderthals were active hunters, using wooden spears to hunt at close range. This would have been risky, and likely would have required close cooperation between individuals in order to gain advantage over prey. This might have included planning an ambush or driving prey into natural cul-de-sacs.

The authors propose that use of this hunting style by Neanderthals or other hominins may have therefore shaped social behaviour and cognition.

Originally published by Cosmos as Neanderthals on spear-hunts