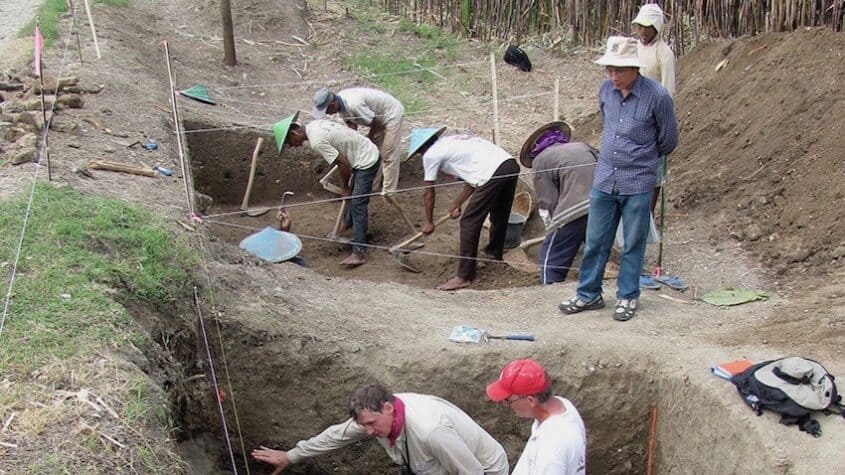 The disputed age of the youngest known Homo erectus remains on the Indonesian island of Java has been revised, effectively ruling out any overlap between the archaic human species and anatomically modern humans.

The bones in question – 12 skull caps and two lower leg bones – were discovered in the 1930s by Dutch explorers near the Solo River at Ngandong in Central Java.

Ngandong sits just 10 kilometres from Trinil, the site where Eugène Dubois unearthed the very first fossils of Homo erectus – then dubbed Java Man – in 1891. At the time, Java Man was proclaimed as a “missing link” between apes and humans.

Since then, Homo erectus has emerged as the most widespread of our ancient relatives. Remains throughout Africa, in Georgia in the Caucasus, in eastern China and on the Indonesian archipelago as far east as Java are all now considered to have come from the same long-surviving species.

The species emerged as far back as two million years ago, but exactly how long they persisted has been a mystery.

By the look of the Ngandong remains, they belonged to some of latest surviving members of the species. But attempts to date the hominin bones, the surrounding sediments and nearby animal fossils have thrown up wildly divergent age estimates, ranging from more than 500,000 years old to as young as 27,000 years old.

Geochronologist Kira Westaway from Macquarie University in Sydney, who worked on the new analysis, was determined to come up with a firmer estimate.

“The problem with this site is that most people have really focussed on dating the age of the fossils themselves,” she says.

In one case, a re-excavation of the site had inadvertently recovered young animal bones (27,000 years old) jumbled in with older layers of earth from when the original Dutch team back-filled the site after they were finished.

Another estimate, of 40,000 years old, was based on uranium series dating, which can be notoriously inaccurate when applied to bone.

To avoid these issues, Westaway and her colleagues took a broader perspective, focussing on how and when the site formed.

The bone bed that held the Homo erectus remains lies in one of several stepped layers – or “terraces” – that were once ancient floodplains alongside the Solo River.

By dating the terraces that formed before and after the fossil-bearing terrace, the team established upper and lower age limits of the bone bed of 161,000 years and 31,000 years.

That immediately ruled out one previously suggested upper age limit of the site of 500,000 years old, says Westaway.

To narrow the age estimate even further, the team excavated at sites upstream and downstream of Ngandong, gathering 52 age estimates in total from different terrace layers using a range of different dating techniques.

“It’s a much bigger scale, much more comprehensive approach to establishing a chronology for this site than has ever been attempted before,” says Westaway.

Each of these 52 age estimates had margins of error: some were minimum ages, others maximum. The team used Bayesian modelling to combine these estimates and arrived at a final approximate age for the bone bed of 117,000 to 108,000 years old.

The finding suggests that Homo erectus lived on Java for more than 1.4 million years.

The new date rules out any co-habitation on the island with anatomically modern humans, who only arrived in the area after about 75,000 years ago, and the possibility that Homo erectus met its end at the hands of modern humans.

It doesn’t rule out interactions with other hominins, including Denisovans, says Westaway. Some scientists have even suggested that the changing appearance of Homo erectus over time could be sign of hybridisation rather than the simple march of evolution.

Finding evidence to back up such tantalising theories will, of course, require more work, says Westaway. Drawing a line under the last appearance of the species is a good start.

“Now that we have a really defined, convincing timeline for [Homo] erectus in this area, now we can start working out, well who did they interact with, and what were the potential causes for extinction?”