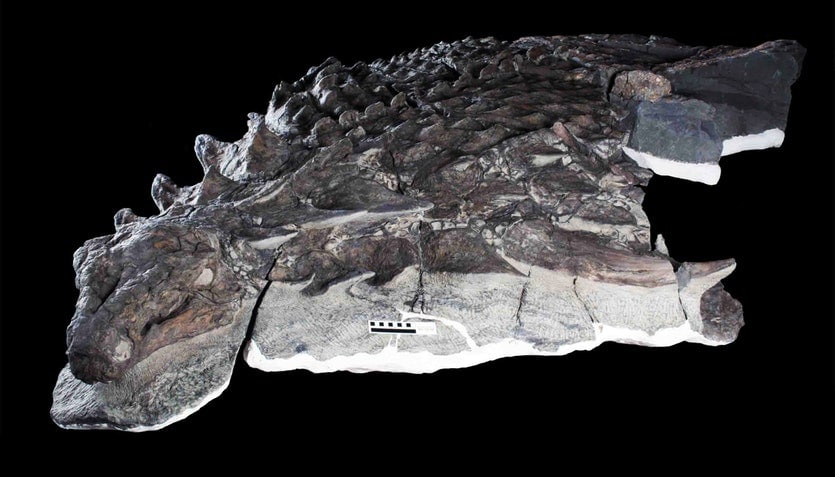 With large horns, continuous scale armour and weighing as much as a Ford Focus, the most well-preserved fossil ever found has provided an unprecedented insight into just how dangerous the world was more than 100 million years ago.

The dinosaur, a new species of nodosaur named Borealopelta markmitchelli (in honour of the museum technician who cleaned it) measures 5.5 metres in length and weighs an estimated 1.3 tons. Donald Henderson, curator at Alberta’s Royal Tyrrell Museum, has described it as the “dinosaur equivalent of a tank”.

Being a tank in the Cretaceous, however, apparently didn’t count for much.

The exceptional preservation of the fossil has enabled scientists to also discern the animal’s colouring: reddish-brown on the top of its body, with lighter shading beneath.

This variation, known as counter-shading, suggests the animal also relied on camouflage as a protective strategy, say Henderson and colleagues In a paper published in the journal Current Biology, with “predation pressure strong enough to select for concealment in this mega-herbivore despite possession of massive dorsal and lateral armour”.

B. markmitchelli is much larger than any modern-day animals that use counter-shading as protective camouflage.

“Strong predation on a massive, heavily-armored dinosaur illustrates just how dangerous the dinosaur predators of the Cretaceous must have been,” says co-author Caleb Brown.

In meeting its demise over 100 million years ago, B. markmitchelli was washed out to sea. Its discovery in 2011 in the ancient oceanic deposits that constitute the oil sands of Alberta, Canada, was thus a huge surprise – a surprise compounded by the gradual realisation, arising during 7,000 hours of cleaning, that it was in exquisite condition.

So extraordinarily well-preserved is the 110-million-year-old fossil that it has been dubbed the “Mona Lisa of dinosaurs” and described as one of the most beautiful specimens ever found. It was unveiled in 2017 after years of patient and delicate cleaning.

It represents both a new species and genus of the herbivore family known as nodosauridae.

“This nodosaur is truly remarkable in that it is completely covered in preserved scaly skin, yet is also preserved in three dimensions, retaining the original shape of the animal,” Brown says.

“The result is that the animal looks almost the same today as it did back in the Early Cretaceous. You don’t need to use much imagination to reconstruct it; if you just squint your eyes a bit, you could almost believe it was sleeping.”

Originally published by Cosmos as Dinosaur depended on camouflage protection