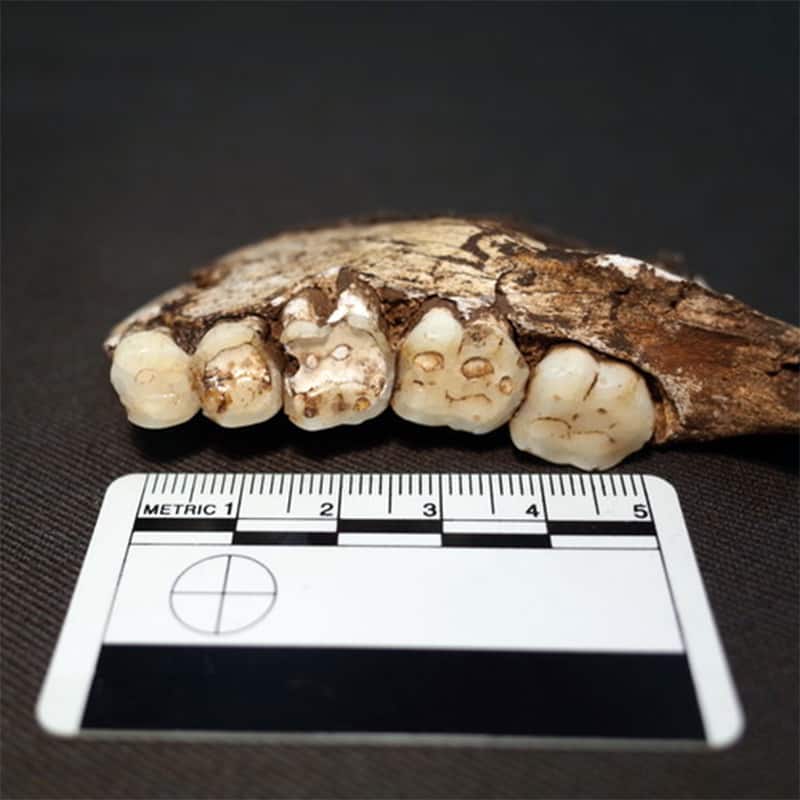 There was a lot of excitement when scientists reported the discovery of an entirely new hominin species, Homo naledi, in 2015. Since then, we are gradually learning more about them. For example, earlier this year, researchers found that they lived sometime between 335,000 and 236,000 years ago.

Now my colleagues and I have reported among the first evidence on the diet and behaviour of this fascinating new addition to the human family tree. Our research, published in the American Journal of Physical Anthropology, suggests they probably ate a substantially different diet from other South African hominins.

The young age of Homo naledi suggests they may have shared their environment with humans, raising an intriguing discussion about the ecological niche they would have filled. The preservation of their skeletons is also interesting – the research team that first described it concluded they may have deliberately placed their dead in the cave.

In our research, we examined the jaws and teeth of this species. We recorded more dental fractures, or chips as they are commonly called, than in all other closely related species studied. The size, number and position of chips can all give insight into the diet and behaviour of past populations. We can easily work out if a chip occurred before or after death – further wear on a biting surface where the fracture is seen means it appeared during the individual’s lifetime.

Chips on front teeth suggests the cause may relate to cultural behaviours, such as using the teeth as tools. In contrast, small chips found predominately on the back teeth and on areas between teeth rather than on the outside suggests a dietary component is the cause.

In H. naledi, more than 40% of teeth are affected – which is very high. However, this chipping is not distributed evenly over the teeth. The back teeth are the most fractured, with more than half having at least one chip and many having multiple small chips. That said, front teeth are still affected much more than in other species – more than 30% have one chip or more. These results suggest H. naledi regularly chewed on small, hard objects. In fact, the fractures are unlikely to have been caused by any process other than chewing as the areas between teeth are most affected.

To put these results into context, H. naledi has more than twice the chipping rate of Australopithecus africanus, and four times that of Paranthropus robustus, two extinct hominin species often thought to have commonly consumed hard foods (though there’s still a lot of discussion about exactly what their diet consisted of). This contrast becomes even more marked when compared to living great apes, with gorillas having around 10% of teeth chipped and chimpanzees only 5%. Furthermore, the multiple small chips, sometimes more than five on a single tooth, found on H. naledi is not found on any individual in the comparative samples studied – strongly suggesting this species had a unique diet.

The species with the most similar rate and pattern of chipping to H. naledi is baboons – 25% of their teeth have fractures. The chipping is probably caused by the environment in which they forage, including consuming large amounts of grit and other hard objects.

Certain samples of modern humans also show a similar chipping rate to H. naledi, including living Inuit and Aboriginal Australians as well as fossils of dead humans from other groups. However, the pattern of chipping is substantially different – modern humans tend to show the most fractures on the front teeth. The few archaeological examples that do have similar fracture patterns support the conclusion that the chipping in H. naledi relates to diet and not to using teeth as tools.

Another intriguing finding is that the right teeth of H. naledi consistently have more chips than left teeth regardless of the tooth type studied (right: 50% vs. left: 38%). It may be possible that this reflects H. naledi individual’s handedness leading them to place food items more often in the right side of the mouth. But it may also be related to a predisposition to chew with one side over the other. Once further samples are uncovered this relationship can be explored further.

What did they eat?

The results of this study suggest H. naledi may have specialised in eating certain foods such as raw tubers, with grit sticking to the surface. However, it is also possible that they ate a particularly tiny, hard food item, such as a type of nut or seed, or that they cut or somehow dismantled bigger pieces of hard foods into smaller pieces.

For now, all we can conclude for certain is that H. naledi consumed a diet significantly different from any other fossil hominin species yet studied, containing a bigger proportion of small, hard objects. Further research on the microscopic wear of these teeth and studying plant remains in their dental tartar may provide evidence for the exact cause of these dental fractures. Hopefully we’ll uncover some of the best kept secrets of this fascinating species soon.

Originally published by Cosmos as Homo naledi had a unique diet