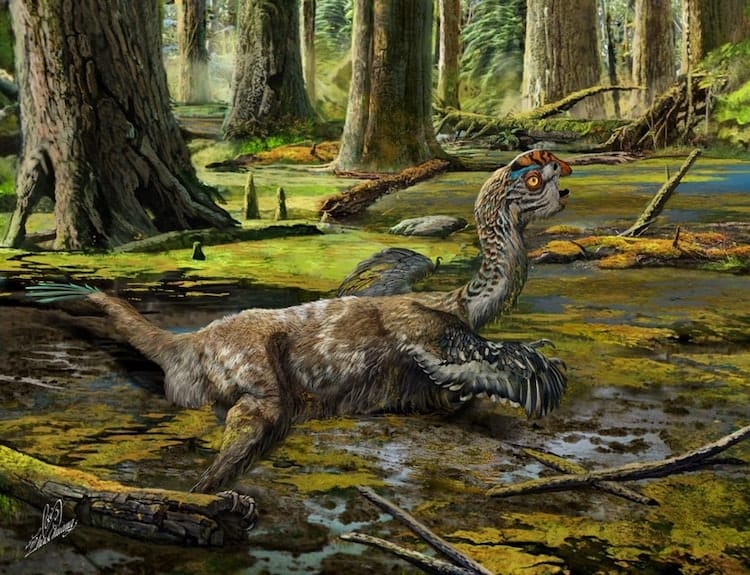 An artistic reconstruction showing the last-ditch struggle of Tongtianlong limosus as it was mired in mud – perhaps how the recently discovered specimen was killed and buried. Credit: Mr. Zhao Chuang

The discovery of a remarkably well-preserved bird-like dinosaur fossil in China’s Ganzhou region suggests an evolutionary surge took place in the late stages of the Cretaceous Period.

The find means that at least six species of oviraptorosaur – a group of feathered dinosaurs with shortened, toothless skulls and unusual feeding adaptations – were present in the region around 72 million years ago. A previously little-known group, all six species have been unearthed in just the past five years.

The latest, named Tongtianlong limosus, is described in a paper authored by a team led by palaeontologist Junchang Lu from Beijing’s Chinese Academy of Geological Science, and published in the journal Nature.

The fossil was found in the area of Ganzhou known as the Nanxiong Formation and is particularly notable because of its unusual position: limbs splayed, neck outstretched and head raised.

It was delivered to the palaeontologists after being unearthed at a school building site by a farmer and some construction workers.

Because of this, the scientists have been unable to identify the fossil’s precise original location, nor accurately interpret the reason for its peculiar shape.

One highly speculative theory raised by Lu and colleagues is that the animal may have died struggling to fight its way out of mud.

The paper explains that Tongtianlong differs from other oviraptorosaurs discovered in the region because of its dome-shaped skull roof and a very convex premaxilla – a bone at the tip of its upper jaw.

“The large number of oviraptorosaurs from Ganzhou,” write Lu and colleagues, “document an evolutionary radiation of these dinosaurs during the very latest Cretaceous of Asia, which helped establish one of the last diverse dinosaur faunas before the end-Cretaceous extinction.”