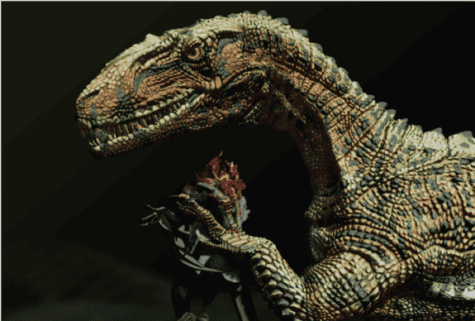 An impression of Australovenator with prey. Credit: Travis Tischler

Australian scientists have announced the discovery of the fragmentary remains of a new species of theropod dinosaur in central Queensland.

They include two partial vertebrae, three bones from the hands and feet and several other unidentifiable bone fragments.

The find was made close to where Australovenator wintonensis, one of the most complete dinosaur specimens in Australia, was unearthed.

Researchers from the University of New England and Swinburne University of Technology suggest that while the new species bears some resemblance to Australovenator, there are key differences, indicating the presence of a second megaraptorid theropod species in what is known as the Winton Formation.

“If correct, the latter interpretation adds further support to previous claims that megaraptorids were the dominant large predator in many Australian mid-Cretaceous terrestrial ecosystems,” they write.

While the new specimen is poorly preserved, it includes the only megaraptorid vertebrae found in Queensland.

Originally published by Cosmos as Introducing a new Aussie dinosaur