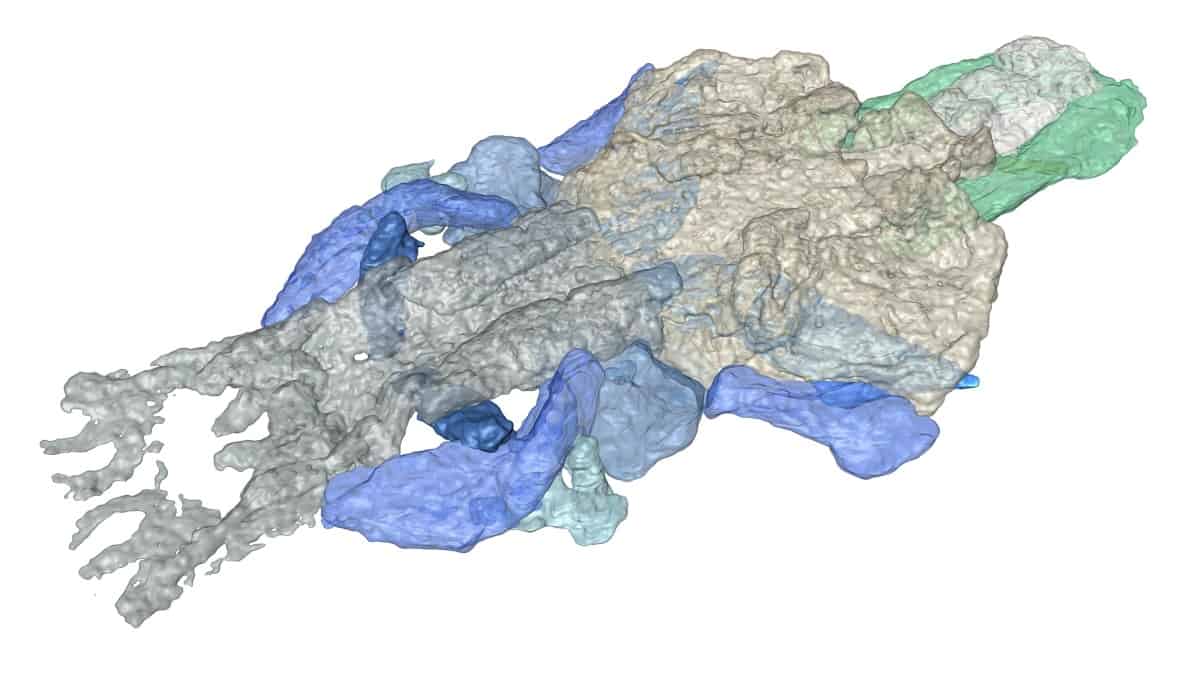 All four-limbed vertebrates, including humans, are descended from the first organisms which transitioned from Earth’s ancient oceans to land. New research on a 390 million-year-old fish-like creature which has puzzled palaeontologists for 130 years might finally answer the question of where it fits in the evolutionary tree, and how it relates to the evolution of four-limbed animals.

Palaeospondylus gunni was a 5cm-long fish-like creature with a body similar to an eel. In a study published in Nature, an international team used powerful X-ray technology to scan the animal’s fossilised skull – squashed under nearly 400 million years worth of sediment. The team argues their results provide evidence to suggest Palaeospondylus was closely related to the animals which eventually left Earth’s early oceans to become the first land-dwelling vertebrates.

Dr Yuhzi (Daisy) Hu, co-author of the paper while she was at the Australian National University, spoke with Cosmos. Despite Palaeospondylus fossils being quite abundant, she says the creature’s small size and poor quality of its fossils have made it quite difficult to study. “Placing this specimen in the evolutionary tree has been quite difficult after the discovery of the first one in 1890. So, it is a question that hasn’t been answered in over 100 years.”

Hu helps paint a picture of what the world looked like when Palaeospondylus was alive.

Palaeospondylus lived in a period of geological time known as the Devonian, often referred to as the “Age of Fishes”. The Devonian saw the appearance of the first vascular plants, increased diversity and complexity of marine life, and mass extinction events that saw the demise of brachiopods, trilobites and conodonts.

The late Devonian was hot and humid. Towering above the land were forests made up not of trees, but giant mosses. The first roots, leaves and seeds began evolving toward the end of the period. On the forest floor, arthropods dominated the land.

Shallow water reefs of rugose corals and encrusting red algae were abuzz with life. A time known as the “Devonian explosion” saw a rapid diversification of vertebrate marine life. Jawless and armoured fish, known as placoderms, are common. The first jawed fish also appear. “We also have the rise of the first sarcopterygians, lobe-finned fish, which eventually produced the first tetrapods just before the end of the Devonian,” Hu adds.

In the Palaeospondylus scans, Hu says they found three semicircular canals, which indicate the inner ear morphology of jawed vertebrates. “This resolves an issue which previous studies were not able to identify.”

Previous studies suggested that the animal was related to primitive jawless vertebrates. But the key cranial features observed in the new study suggests that Palaeospondylus beplaced into the tetrapodomorpha – four-limbed animals. “So, it was more closely related to limbed tetrapods than to many other known tetrapod morphs that still retained fins,” says Hu.

Unlike tetrapodomorphs in general, teeth, dermal bones and paired appendages have never been associated with Palaeospondylus. These features are readily found in fossils of other animals that lived around the same time and place. “Whether these features were evolutionarily lost or whether normal development froze halfway in fossils might never be known,” says the paper’s lead author Tatsuya Hirasawa of the University of Tokyo. “Nevertheless, this heterochronic evolution might have facilitated the development of new features like limbs.”

But the most exciting aspect of the study, according to Hu, is “the chance to propose its evolutionary position and be able to identify the cranial skeleton boundaries. That’s actually the key to us.” This was made possible because this specimen is quite well preserved, and the modern technology allowed them to study it in more detail.

“Finding a perfect, or even well-preserved, fossil specimen is already quite hard,” Hu says. “We were literally talking about winning the lottery or even harder. Those two samples that were selected in this study, I think they were out of 2,000 fossils. So, a lot of time has been used in the beginning, before you even dig into studying the animal.”

Once specimens were chosen, the researchers used the extremely powerful RIKEN SPring-8 synchrotron in Japan to generate high-resolution micro-CT scans using X-rays. Unusually, the team used fossil skulls completely embedded in the rock. “Choosing the best specimens for the micro-CT scans and carefully trimming away the rock surrounding the fossilised skull allowed us to improve the resolution of the scans,” says Hirasawa. “Although not quite cutting-edge technology, these preparations were certainly keys to our achievement.”

Hu says that the aim of the paper is to help answer the question: what was Palaeospondylus? “I think we’re a step closer towards that answer. But I don’t think we achieved the answer yet. It’s basically a pixel puzzle that we want to resolve, and it obviously contributes to our curiosity as human beings. That’s usually what fundamental science can do. But there’s a certain distance that we need to go to achieve full 100% certainty.”

Hu believes the team won’t limit their study to early vertebrate evolution in the fossil record. “I think they will decide to use molecular biology and genetics to study developing embryos of key modern vertebrates, such as our Australian lungfish. The strange morphology of Palaeospondylus is comparable to that of tetrapod larvae. So it’s very interesting from a developmental genetic point of view.” The plan is, Hu says, to “study the water-to-land transition in vertebrate history with the help of Palaeospondylus and all the other developmental biology stuff that the team has got.”