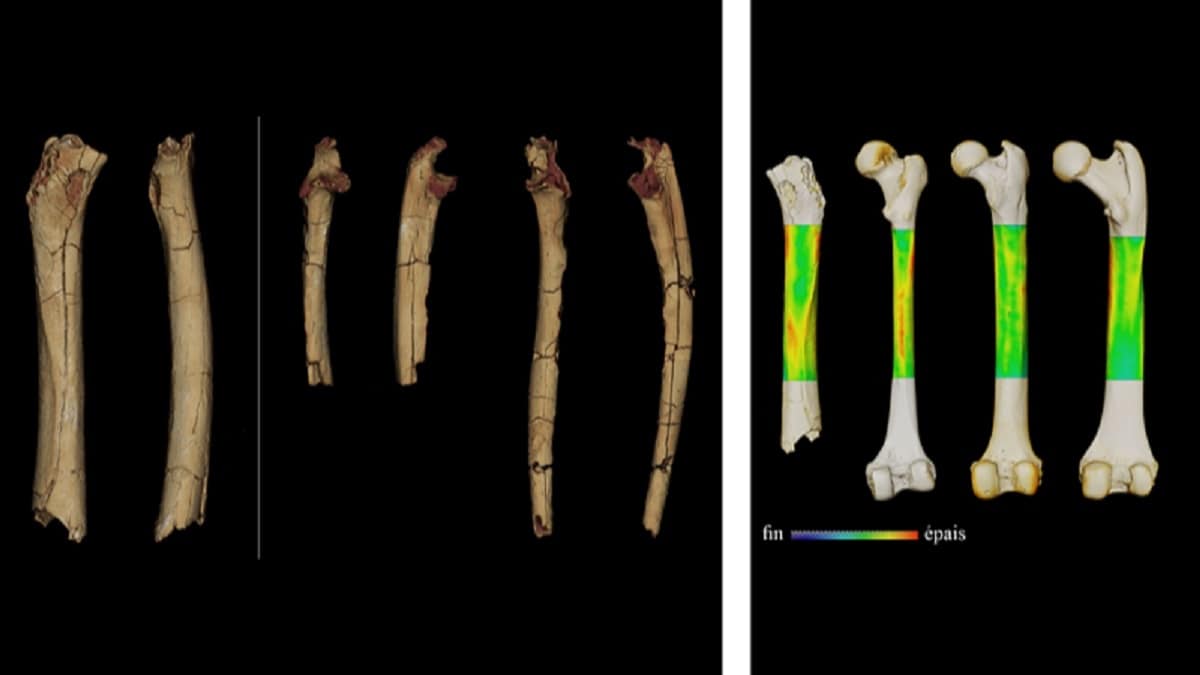 Left: 3D models of the postcranial material of Sahelanthropus tchadensis. From left to right: the femur, in posterior and medial view; the right and left ulnae, in anterior and lateral view. Right: Example of analysis performed to interpret the locomotor mode of Sahelanthropus tchadensis. 3D cortical thickness variation map for the femurs of (from left to right) Sahelanthropus, an extant human, a chimpanzee and a gorilla (in posterior view). This analysis enables us to understand the variations of mechanical constraints on the femur and to interpret these constraints in terms of locomotor mode. Credit: © Franck Guy / PALEVOPRIM / CNRS – University of Poitiers.
More on:
human evolution

When in human evolution did the decisive step of bipedalism take place? There is no clear answer, but research from France suggests it was a lot earlier than many thought.

Developing the ability to walk on two legs is regarded as critical in our evolution. Keeping our hands free while travelling allows us to carry tools. Walking upright and on two legs enabled our ancestors to make their way out of the shrinking forests of ancient Africa onto the open savannah because they would have been able to peer over the long grass to keep an eye out for predators.

So, it would have been a giant leap for our ape-like ancestors. But so little fossil evidence remains from this part of the human journey that it is difficult to pinpoint the transition.

A new study involving scientists from the French National Centre for Scientific Research (CNRS), University of Poitiers in France, and researchers from the central African country Chad, sheds some more light on when bipedalism evolved in early humans.

The team examined the fossils of three limb bones from the oldest human representative known to science, Sahelanthropus tchadensis and have published findings in Nature.

Discovered by the Franco-Chadian Paleoanthropological Mission (MPFT) in 2001, Sahelanthropus tchadensis dates back seven million years. Back then, changes in the climate saw Africa begin drying leading the continent’s forests to retreat, opening up its now iconic savannah grasslands.

Massive elephant-like Stegotetrabelodon and Deinotherium, and long-clawed, strange relative of horses called Ancylotherium roamed these burgeoning plains. Other recognisable animals similar to modern hippos, giraffes and big cats all would have made early humans tread lightly.

Included in the 2001 fossils of Sahelanthropus tchadensis was a remarkably well-preserved cranium. The orientation and position of the occipital foramen in the cranium (where the spine connects to the skull) indicated the animal was capable of bipedalism.

In addition to the cranium the MPFT found jaw and tooth fragments, and two forearm bones and a femur. With no other large primate found at the site, these other fragments were attributed to Sahelanthropus tchadensis, though it is unclear if they are from the same individual, which was nicknamed Toumaï, meaning “hope of life” in the local central Saharan Gorane language.

The femur and forearm bones were analysed and compared to modern and extinct apes, and members of the human group including ancient Homo sapiens, other ancestral Homo species, and australopithecines.

According to the results of the forearm analyses, while climbing through the trees, Sahelanthropus tchadensis would have used a mixture of bipedal and quadrupedal locomotion enabled by firm hand grips. This is a marked divergence from the arboreal movement of gorillas and chimpanzees which lean on the back of their foot and hand bones.

The authors write that the femur shows “habitual bipedality” would have been the most energy-efficient mode of transport for Sahelanthropus tchadensis while the forearms “preserve evidence of substantial arboreal behaviour.”

“Taken together, these findings suggest that hominins were already bipeds at around 7 million years ago but also suggest that arboreal clambering was probably a significant part of their locomotor repertoire.”

This study, in addition to earlier cranial studies of our oldest human ancestor Sahelanthropus tchadensis, suggests that bipedalism developed very early in our evolution.