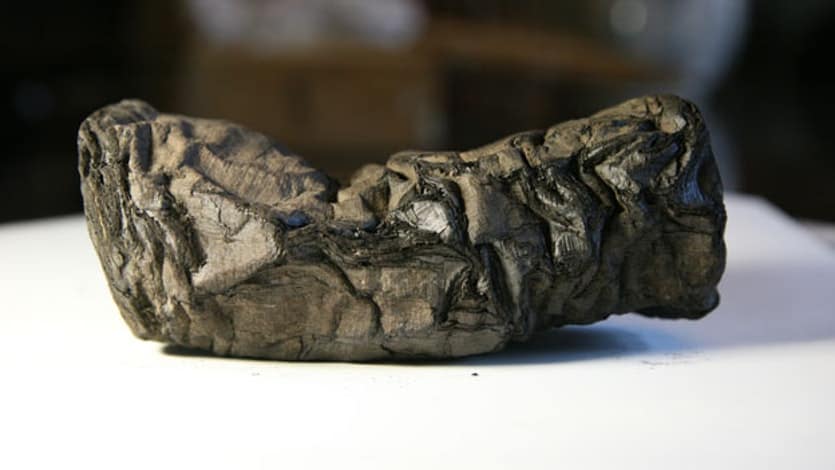 One of the charred, rolled papyrus scrolls from Herculeanum The Guardian

Among the items burned and buried in volcanic ash was a library in a villa in Herculaneum, a Roman city near Pompeii that was destroyed by the explosion. The collection of charred papyrus scrolls are the only survivors from any library in the ancient world.

Researchers in Italy have used sophisticated X-ray techniques to read words from the scrolls, which are too fragile to be unrolled. The sheets could be up to 15 metres in length and were rolled from right to left, so they could be read from left to right.

Scientists at the National Research Council in Naples developed a procedure called X-ray phase contrast tomography (XPCT), which allowed them to read out some words on a scroll without unrolling it. The technique allowed the researchers to pick out the black ink against the burnt surface of the papyrus sheet, because of minute differences in the way to the two materials refracted the X-rays. The results have been reported in

Vito Mocella and others revealed letters from the Greek alphabet and other words, when they used the technique on two scrolls – one rolled and one unrolled. It is believed the library contained Epicurean philosophical texts and may have belonged to Calpurnius Piso Caesoninus, the father-in-law of Julius Ceasar.

The researchers have been unable to read the complete documents so far, but Mocella believes this may possible if more powerful X-rays in a synchrotron are used.

“Many philosophical works from the library of the ‘Villa dei Papyri’, the contents of which have so far remained unknown, may in future be deciphered without damaging the papyrus in any way,” the researchers write.