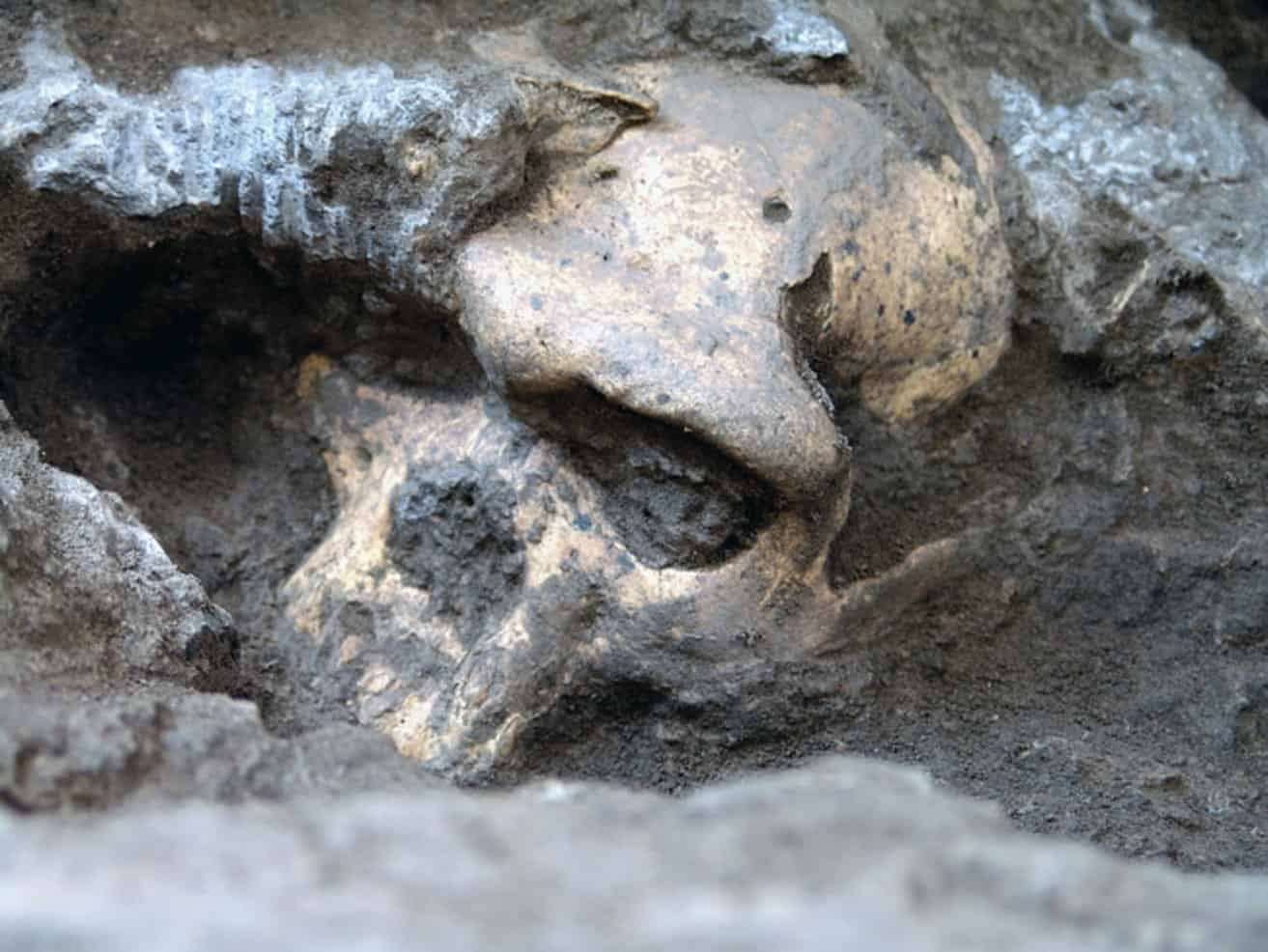 This 1.8 million-year-old skull from a cave in Georgia resembles skulls found in Africa more than other skulls dug up in the same cave. Analysis suggests all these skulls represent a single species.

Ever since Darwin told us that new species derived from older ones – “descent with modification” – the hunt has been on to find our ancestor. The prevailing view is that not one, but many different fossil species fit the bill. Now a finding from a cave in Dmanisi, Georgia, suggests these fossils are all variations on a theme: there is just one species after all. Not everyone is convinced.

Our first ancestral candidate was unearthed in Java by Eugene Dubois in 1892, 10 years after Darwin’s death. The skull he found was ape-like, though with a flatter face and a larger more rounded dome, while the skeleton was clearly that of an upright walking creature. Since then similar skulls and bones have been found across Africa, Indonesia, China, and Europe. Ranging in age from around 2.3 million to 500,000 years old, these ancestral humans were put into the genus Homo. Yet while there was a lot they shared, they were highly variable. Take brain sizes. They were all large relative to body mass, but they ranged from 600 cubic centimetres to 800 cc. (A modern human boasts 1,350 cc; a very primitive ancestor Australopithecus, 450 cc).

But even more significant were the differences in the detailed structure of the face and skulls, particularly the shape of their eyebrow bones. Not surprisingly there has been a long-standing debate. Did this diversity represent diversity within one species or did they represent different species?

With ever more diverse remains unearthed since the 1960s, the latter view has prevailed. We now have a list of some 17 species within Homo, everything from Homo habilis of Ethiopia (the eldest at 2.3 million years) to Homo erectus of Asia and Africa to Homo floresiensis, the tiny species found on the Indonesian island of Flores in 2004.

The analysis of the bones found in the Dmanisi cave pushes the pendulum the other way. The findings were published in the October issue of Science.

The authors, Georgian anthropologist David Lordkipanidze and his team, have dug up five skulls from the cave over the past 20 years. All have been diverse.

But the latest takes the cake. First identified by a very large jawbone found in 2000, the matching part of the skull, exhumed in 2005, turned out to be well-preserved but tiny, with an estimated cranial capacity of 546 cc.

Researchers wondered how the five diverse individuals in the cave were related to each other, if at all. The Georgians favour the view that since they were all found in the same cave – probably the prey of sabre-toothed cats whose bones litter the cave – that they were locals and likely to be members of the same species. The diversity was, they believe, due to differences in age and sex. They confirmed that view by using computers to generate 3D images of the skulls.

If the Georgian group is right, then not only are the five cave individuals likely to be the same species, so are the hundreds of other diverse individuals that have been segregated into different species of Homo.

Anthropologist Darren Curnoe at the University of NSW is one who remains underwhelmed by the 3D computer analysis.

He explains that the 3D computer estimations of size and shape are a crude tool when it comes to identifying species. The fine anatomical features are the diagnostic gold standard for species, he says, whether it is identifying plants or people: “These character traits are the bread and butter of what taxonomists do.”

And many anthropologists are sticking to them, Curnoe says: “There’s an awful lot of people who are perplexed about sinking up to 17 species and a 100 years’ worth of painstaking research, into one or two species.”