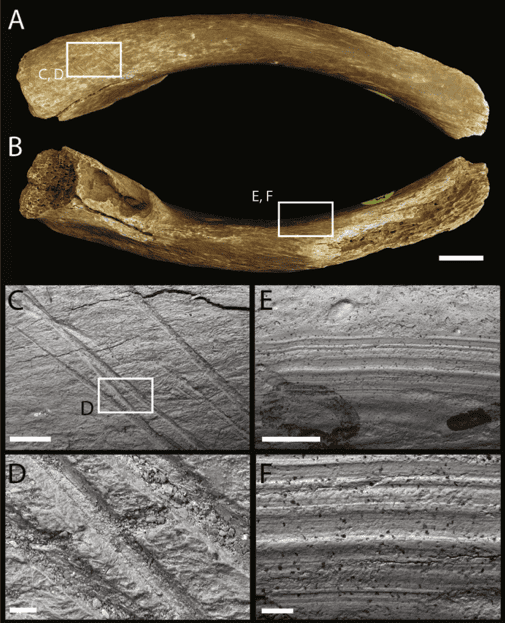 Cut and scrape-marks on the superior (A) and inferior (B) surface of a clavicle found in Gough's Cave. Scanning electron micrographs C, D, E and F show details of the marks. Credit: Silvia Bello et al

Scientists have found signs of gnawing and butcher marks on human leg, rib, other bones in a cave in the Cheddar Gorge in western England, dating from 14,700 years ago, which they believe is evidence of ritual cannibalism.

Biological anthropologist Silvia Bello of the Natural History Museum in London and her colleagues found microscopic evidence that the bodies were butchered in a similar way to those of nonhuman animals found in the cave.

Bello’s team reported their research in the Journal of Human Evolution.

The team used new ultrafiltrated radiocarbon techniques to discover that the human remains were deposited over a very short period of time, possibly during a series of seasonal occupations, about 14,700 years ago.

Originally published by Cosmos as The English were eating each other